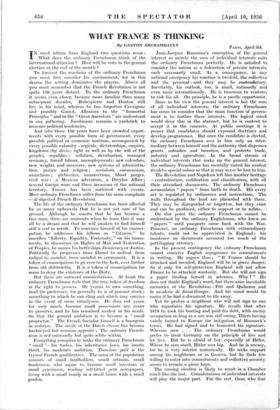 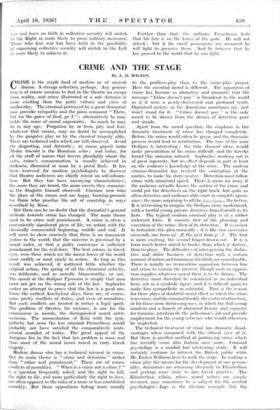 WHAT FRANCE IS THINKING

Yet he prefers a neighbour, who will not sign to one who repudiates his signature. He recalls that after 1870 he took his beating and paid his debt, with enemy occupation so long as a sou was still owing, Thiers having vainly turned to Europe for mitigation of Bismarck's terms. He had signed and he honoured his signature. Whereas now . . . The ordinary Frenchman would prefer to treat Germany on the principle of live and let live. But he is afraid of her, especially of-Hitter. Where he sees small, Hitler sees big. And he is uneasy. for he is very inferior numerically. He seeks support typical French qualificative. The mass of the population among his neighbours or in Geneva, but he finds few consists of small landholders, small artisans, small. willing to enter into commitments and collectiye security tradesmen, who aspire to become small investors or, seems to remain a pious hope, small pensioners, reading self-titled petit newspapers? The coining election is likely to result in a, Chamber living With a small family in a small house with a sufall much like the last Considerations of individual interests garden will play the Major part. For the rest, those who fear To forecast the reactions of the ordinary Frenchman you must first consider his environment, for in this drama the setting dominates the players. Above all you must remember that the French Revolution is not quite 150 years distant. To the ordinary Frenchman it seems even closer, because more familiar than many subsequent decades, Robespierre and Danton still live in his mind, whereas he has forgotten Cavaignac and possibly Guizot. Allusions to the Immortal Principles " and- tothe "-Great-Ancestors "are understood in any gathering. Jacobinism remains a yardstick to measure political tendencies.

And into those 150 years have been crowded experi- ments with every possible form of government; every possible political or economic nostrum, accompanied by every possible calamity—regicide, dictatorships, empires, kingdoms (by divine right as well as by the will of the people), republics ; inflation, devaluation, managed economy, forced labour, unemployments; new calendars, new weights and measures, new, systems of administra- tion, justice and religion ; socialism, communism, anarchism ; plebiscites, insurrections, blood purges, civil war ; a Mexican adventure, a Dreyfus Affair ; several foreign wars and three invasions of the national territory. France has been surfeited with events. Most ordinary Frenchmen suffer from the same complaint- -ill-digested French Revolution.

The life of the ordinary Frenchman has been affected by so many upheavals that he is not yet sure of his ground. Although he asserts that he has become a free man, there are moments when he fears that it may all be a dream and that he will awaken to find himself still a serf in revolt. To convince himself of his emanci- pation he addresses his fellows as "Citizens," he inscribes "Liberty, Equality, Fraternity," on his monu- ments, he discourses on Rights of Man and Federation of Peoples, he names his battleships Democracy or Justice. Politically he progresses from liberal to radical, from radiscal to socialist, from socialist to communist. It is a tok,en of emancipation to go ever to the Left, ever farther from old shibboleths. It is a token of emancipation for some to deny the existence of the Deity.

But these are outward manifestations. At heart the ordinary Frenchman feels that_the true token of freedom is the right to possess. He yearns to own something, land for preference, for generally he is of peasant stock ; something to which he can cling and which may survive in the event of more cataclysms. He does not yearn for very much, because small possessions are easier to preserve, and he has remained modest in his needs. So that the general ambition is to become a "small proprietor." The French Socialist himself is a bourgeois in embryo. The simile of the Dutch cheese has become haeltheyed but remains apposite ; The ordinary French- man is red outwardly but quite white within.

Everything conspires to make the ordinary Frenchman "small "—his tastes, his inheritance laws, his innate, thrift, his moderate ambition. Therefore petit is the Jean-Jacques Rousseau's conception of the general interest as merely the sum of individual interests suits the ordinary Frenchman perfectly. He is satisfied to consider the nation as a federation of private interests, each necessarily small. As a consequence, in any national emergency his reaetion is twofold, the-collective and the personal—and they may be eolitradittory. Inevitably, his outlook, too, is small, nationally and even more internationally. He is timorous to venture, to risk his all. On principle, he is a pacific opportunist.

Since in his view the general interest is but the sum of all individual interests, the ordinary Frenchman has come to consider that the main function of ,govern- ment is to further these interests. His logical mind would deny this in thern abstract, but he is content to accept it in the concrete. At public meetings it is proper that candidates should expound doctrines and develop programmes. But once the candidate is elected, the ordinary Frenchman sees- in him only an inter-. mediary between himself and the authority that dispenses grants, subsidies and bounties, and protects trade, industry and agriculture. In the broad stream of individual interests that make up the general -interest, the ordinary Frenchman has mentally tinted his modest rivulet a special colour so that it may never be lost-to him.

The Revolution and Napoleon left him another heritage —centralisation, codification and classification, with all their attendant documents. The ordinary Frenchman accumulates " papers " from birth to death. His- every - act is regulated by ordinances and instruetiOns, The walls throughout the land are placarded with them. They may be disregarded or forgotten, but they. exist and can be produced, either to support or to refute.- On this point the ordinary Frenchman cannot be understood by the ordinary Englishman, who knew no " papers " until passports came back with the War. Poineare, an ordinary Frenchman with extraordinary talents, could not be appreciated in England ; his - insistence on documents savoured too much of the pettifogging attorney.

In the present contingency the Grdinary Frenchman cannot conceive English repugnance to commitments in writing. He argues thus : "If France should be attacked and invaded, England will be in grave danger. So if only for self-protection England will not allow France to be attacked wantonly. But she will not sign. a paper binding herself in advance. Why ? " He does not doubt England's word, but there arise inevitable , memories of the Revolution—Pitt and Quibeion and. la cavalerie de Saint-Georges. And his mind would be easier if he had a document to file away. war and have no faith in collective security will switch to the Right as more likely to press military measures. Those who fear war but have faith in the possibility of organising collective security will switch to the Left as more likely to achieve it.- -Fluffier -than that, the ordinary Frenchman feels that his fate is on the knees of the gods. He will not attack ; but if his small possessions are menaced he will fight to preserve them. And he believes that he has proved. to the world that he can light.