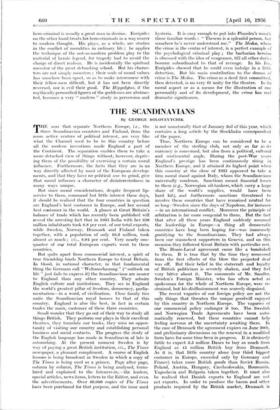 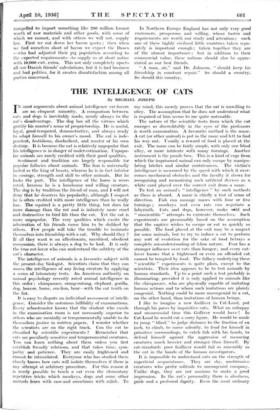 But since moral considerations, despite frequent lip- service to them, command but little interest these days, it should be realised that the four countries in question are England's best customer in Europe, and her second best customer in the world. A glance at Great Britain's balance of trade which has recently been published will reveal the arresting fact that in 1935 India with her 350 million inhabitants took 8.8 per cent, of our total exports, while Sweden, Norway, Denmark and Finland taken together, with a population of only 16.8 million, took almost as much ; viz., 8.04 per cent. Very nearly one- quarter of our total European exports went to these countries.

But quite apart from commercial interest, a spirit of true friendship binds Northern Europe to Great Britain. In blood, in national character, in that fundamental thing the Germans call " Weltanschauung " (" outlook on life" just fails to express it) the Scandinavians are nearer to England than any other country. They admire English culture and institutions. They see in. England the world's greatest pillar of freedom, democracy, parlia- mentarism—in a word, of civilisation. Close family ties unite the Scandinavian royal houses to that of this country. England is also the best, in fact in certain trades the main, customer of these three countries.

Small wonder that they go out of their way to study all things British. They perform our plays in their excellent theatres, they translate our books, they miss no oppor- tunity of visiting our country and establishing personal business and social contacts. The progress the study of the English language has made in Scandinavia of late is astonishing. At the present moment Sweden is by way of paying a great British institution, viz., The Tinier newspaper, a pleasant compliment. A course of English lessons is being broadcast in Sweden in which a copy of The Times is being used as a primer. Page after page, column by column, The Times is being analysed, trans- lated and explained to the. listeners-in,—the leaders, special articles, news items, letters to the Editor, and even the advertisements. Over 60,000 copies of The Times have been purchased for that purpose, and the issue used is not unnaturally that of January 3rd of this year, which contains a long article by the Stockholm correspondent of the paper.

Thus, Northern Europe can be considered to be a member of the sterling club, not only as far as its currency is concerned, but also from a political; cultural and sentimental angle. During the post-War years England's prestige has been continuously .rising in Northern Europe, and it attained its highest point when this country at the close of 1935 appeared to take a firm moral stand against Italy, whom -the Scandinavians universally condemn. Sanctions meant financial losses to them (e.g., Norwegian oil-tankers, which carry a large share of the world's supplies, would have been hard hit), and furthermore sanctions threatened to involve these countries that have remained nbutral for so long—Sweden since the days of Napoleon, for instance —in an international conflict. Moreover the principle of arbitration is far more congenial to them. But the fact- that after all these years England suddenly assumed- the leadership in Europe—a thing all democratic. countries have long been hoping for—was immensely gratifying to the Scandinavians. They had always been our staunchest supporters in Geneva, and on this occasion they followed Great Britain with particular zest.

The Hoare-Laval agreement came like a bombshell to them. It is true that by the time they recovered from the first effects of the blow the projected deal was off. But their belief in the statecraft and loyalty of British politicians is severely shaken, -and they feel very bitter about it. The comments of Mr. Sandler, Sweden's Foreign Minister, who has • often acted as spokesman for the whole of Northern Europe, Were re- strained, but his disillusionment was scarcely disguised. - The recent vagaries of our foreign policy are not the only things that threaten the unique goodwill enjoyed by this country in Northern Europe. The vagaries of our commercial policy endanger it too. The Swedish and Norwegian Trade Agreements have been auto- matically renewed, but these countries . cannot help feeling nervous at the uncertainty awaiting them. In the case of Denmark the agreement expires on June 20th, and preliminary discussions on-the renewal in a Modified form have for some time been in progress. It is obviously futile to expect 3.5 million Danes to buy as much from England as 45 million British buy from Denmark. As it is, that little country- alone (our third biggest customer in Europe, exceeded only by Getniany and France) takes more British goods than Soviet.' Russia, Poland, Austria, Hungary, Czechoslovakia, . Roumania, Yugoslavia and Bulgaria taken together. It //hist also be realised that Danish exports to England are not net exports. In order to produce the bacon and other products required by the British market, Denmark is compelled to import something like 200 million kroner worth of raw materials and other goods, with some of which we cannot, and with others we will not. supply her. first we cut down her bacon quota ; then when we find ourselves short of bacon we expect the Danes —who had adjusted their pig population according to the expected requirements—to supply us at short notice with 10,000 cwt. extra. This not only completely upsets all our Danish friends' calculations, but it is bad business and bad politics, for it creates dissatisfaction among all parties concerned. In Northern Europe England has not only very good .customers, prosperous and willing, . whose tastes and • requirements are worth our study and attention ; each one of these highly civilised little countries taken sepa- rately is important enough ; taken together they are of the utmost 'importance ; but in addition to their commercial value, these nations should also be appre- ciated as our best friends.

"A man, sir," said Dr. Johnson, "should keep his friendship. in constant repair." So should a country. So should this country.