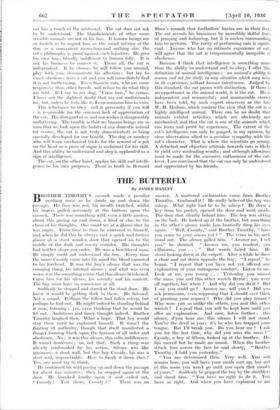 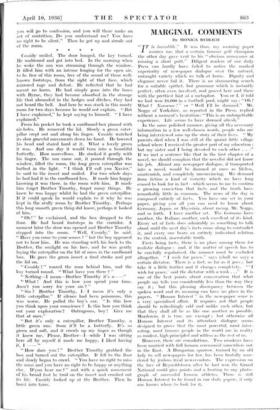 'BROTHER TIMOTHY'S cassock made a peculiar swishing noise as he strode up and down the passage. He face was red, his mouth twitched, whilst his lingers pulled nervously at the buttons upon the cassock. There was something wild, even a little aimless, about this pacing up and down, a kind of clue to the chaos of his thoughts. One could see at a glance that he was angry. From time to time he muttered to himself, and when he did this he always cast a quick and furtive glance at a stout wooden door that opened on to the 'Middle of the dark and musty corridor. His thoughts had neither shape nor order. He was a bewildered man. ' He simply could not understand the boy. Every time the name Cassidy came into his mind the blood mounted 16 his forehead. It was the boy's silence that was the - enraging thing, his infernal silence ; and what was even worse was the something serene that this silence betokened. Curse him for his silence, his serenity and his content. The boy must have no conscience at all.

• Suddenly he stopped and stared at the stout door. He knew it would be getting dark in there. He listened. Not a sound. Perhaps the fellow had fallen asleep, but perhaps he had not: He Might indeed be standing behind it now, listening; yes, even thinking that he would be let out. Ambitious and fancy thought indeed. Brother Timothy laughed then. What a hope. That boy -Would stay there Until he explained himself. It wasn't the flouting of authority, though that itself manifested a danger looming black upon the horizon of all order and obedience. No ; it was this silence, this calm indifference. If wasn't innocence ; no, not that. Such a thing was idrcady confounded by his action. Silence was like ignorance, a stout wall, but this boy Cassidy, his was .a -steel wall, impenetrable. How to break it down then ? Yes, one must try to think.

He continued his wild pacing up and down the passage for about five minutes ; then he stopped again at the door. He knocked loudly upon. it and called out, " Cassidy ! You there, Cassidy ?:" There was no answer.. A muttered exclamation came from Brother Timothy. Confound it,!. He really believed the boy was asleep. What right had he .to be asleep? lie .drOw, a key from his pocket, opened. the door and went inside. The door shut silently behind him. The boy was sitting on the bed. He looked up at the brother, but something in the other's. glance made him hurriedly drop his eyes again. " Well, Cassidy," said Brother Timothy, ". have you come to your senses yet ? " The veins in his neck stood out. The silence galled him. "Answer 'me, I tell -you," he shouted. "Answer me, you insolent, you villainous, you . . . But words failed him. He stood. looking down at time culprit. After a while he drew a chair and sat down opposite the boy. " I repeat," lie began, "I repeat that you have not yet Offered any explanation of your outrageous conduct. Listen to me. Look at me, you young . . Yesterday you .missed the mass, you and this other wretch Byrne ; you went off together, but where ? And why did you do it ? Did I say you could go ? Answer me, will you ?. Did you ask permission, even supposing that I should ever think of granting your request ? Why did you play truant ? Why were you so unlike the others, you and this other wretch ? I rcpeat that you will be kept here until you offer an explanation. And now, listen further : this silence, d'you hear me, this silence I will not stand. You've the devil in you ; it's he who has trapped your tongue. But I'll break you. Do you hear me ? I ask you for the last time, why did you miss the ,mass ?." Cassidy, a boy of fifteen, looked up at the brother. His lips moved but he made no sound. When the brother struck him across the face he said slowly, "Brother Timothy, I told you yesterday."

"You are . determined then. Very well. You will remain here, you will have your meals sent up, but out Of this rooni you won't go until you open that month Of your." Suddenly he gripped the boy by the shoulders and Shook .him. "you have no right to do it. You have no right. And when you have explained to .me you. will -go to confession, and you will there Make an act of 'contrition. Do you understand me? You have no right to be silent." Then he got up and strode out of the room.

* * Cassidy smiled. - The door banged, the key turned. He undressed and got into bed. In the morning when he woke the sun was streaming through the window. It filled him with an intense longing for the open air, to be free ofthis room, free of the sound of those well- known footsteps, from the sight of that face, which mirrored rage and defeat. He reflected that he had meant no harm. He had simply gone into the lanes with Byrne, they had become absorbed in the strange life that abounded in the hedges and ditches, they had not heard the bell. And here he was stuck in this musty room for two days because he would not explain. "But I have explained," he kept saying to himself. " I have explained."

Froth- his pocket he took a cardboard-box pinned with air-holes. He removed the lid. Slowly a green cater- pillar 'crept out and along his finger. Cassidy watched its slow graceful movements down his hand. He lowered his 'head and stared hard at it. What a lovely green it was. And one day it would turn into a beautiful .butterfly. How marvellous. He stroked it gently with his 'finger. The sun came out, it poured through the window, filled the room, the long green caterpillar was bathed in the light. " I think I'll call you Xavier," he said to the insect and smiled. For two whole days he had had it in the cardboard box. It made him happy knowing it was there, in the room with him. It made him forget Brother Timothy, forget many things. He knew he was happy whilst he had the green caterpillar. If it 'coidd:_sPeak he would explain to it why he was kept in the stuffy room by Brother Timothy. Perhaps this long smooth green thing did know-, perhaps it looked at him."

' "Oh!" be exclaimed, and the box dropped to the floor. He had heard footsteps in the corridor. A moment later the door was opened and Brother Timothy stepped . into the room. "Well. Cassidy," he said. "Have you come to your senses ? " but the boy appeared not to hear.him. He was standing with his back to the Brother, the sunlight on his face, and he was gently laying the caterpillar on the bit of moss in the cardboard box. He gave the green insect a final stroke and put the lid 'on.

" Nothing—I mean—Brother Timothy it's a " What! And this is how you spend your time. Aren't you sorry for your sin ? "

"But it's only a caterpillar, Brother Timothy, a little ' green one. Soon it'll be a butterfly. It's so green and soft, and it crawls up my finger as though it knew 'me.' Please, Brother—I—while I was sitting here all by myself it Made me happy, I liked having it, "'How dare you!" Brother Timothy grabbed the box and turned out the caterpillar. It fell to the floor and slowly began to crawl. "You have no right to miss the mass and you have no right to be happy or anything else. D'yott hear me ?" and with a quick movement ol' his broad 'foot he trod on the insect and crushed out its life --Cassidy looked Up at the Brother. Then he burst Jae