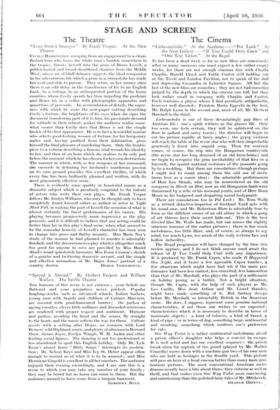 CEctLy HARRINGTON, escaping from an engagement to a clean- limbed bore who bears the white man's burden somewhere in the tropics, throws herself into the arms of Bruce Lovell, a golden-haired and broad-shouldered charmer from the Middle West, whose air of bluff defiance suggests the ideal companion in the adventurous life which a prize in a sweepstake has made her avid and able to pursue. They retire, on her money since there is an odd delay in the transference of his to an English bank, to a cottage in an unfrequented portion of the home counties, where Cceily spends her time impeding the gardener and Bruce his in a cellar with photographic apparatus and quantities of peroxide. An accumulation of details, the eager- ness with which he scans the newspaper cutting describing Cecily's fortune, the brightness of his eyes when she signs the document transferring part of it to him, his passionate demand for solitude in their retreat, makes the audience realise some- what sooner than Cecily does that Bruce is not the simple huskie of his first appearance. He is in fact a homicidal maniac who selects good-looking women of fortune for his temporary mates and, having profited front their infatuation, gives himself the final pleasure of murdering them. Only the frontis- piece to a volume describing a famous trial reveals his identity to her, and then at an hour which she realises to be only just before the moment which he has chosen forher own destruction. The manner in which, with so few weapons at her command, she succeeds in defeating her husband's murderous passion on its own ground provides this excellent thriller, of which every line has been brilliantly planned and written, with its most gruesomely effective scene.

There is evidently some quality in homicidal mania as a dramatic subject which is peculiarly congenial to the talents of actors who write their own plays. Mr. Frank Vosper follows Mr. Entlyn Williams, who may be thought only to have completely found himself either as author or actor in Night Must Fall, in making the part of Lovell the occasion of what is almost certainly the finest performance of his career. His playing becomes progressively more impressive as the play proceeds, and it is difficult to believe that any acting could be better than his in this play's final scene, when what seemed to be the muscular honesty of Lovell's character has been seen to change into gross and flabby insanity. Miss Marie Ney's study of the woman he had planned to murder is admirably finished, and the decorations too play which is altogether much too good for anyone to miss are provided by Miss Muriel Aked's usual spinsterish humours, Miss Esma Cannon's sketch of a gauche and twittering domestic servant, and the simple and effective naturalism of Mr. Major Jones' portrait of a