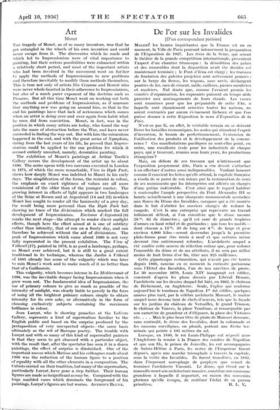 THE tragedy of Monet, as of so many inventors, WAS that he got entangled in the wheels of his own invention and could never escape from it. The discoveries which he made and which led to Impressionism were of vital importance to painting, but their serious possibilities were exhausted within a relatively short period, and most of the important artists who had been involved in the movement went on further to apply the methods of Impressionism to new problems and therefore inevitably to modify these methods themselves. This is true not only of artists like Cezamte and Renoir who were never whole-hearted in their adherence to Impressionism, but also of a much purer exponent of the doctrine such as Pissarro. But all this time Monet went on working out both the methods and problems of Impressionism, as if unaware that anything new was going on around him, so that in the end his paintings have that lack of seriousness which comes when an artist is doing over and over again from habit what he once, did from conviction. Monet, in fact, was in the position in which many artists are today, who found the way into the maze of abstraction before the War, and have never succeeded in finding the way out. But with him the miraculous happened in the end, and with the great series of Nympheas, dating from the last years of his life, he proved that Impres- sionism could be applied to the one problem for which it seemed entirely unsuited, namely, decorative painting.

The exhibition of Monet's paintings at Arthur Tooth's Gallery covers the development of the artist up to about 1890. The series opens with two canvases executed in London in 1871, of which the more remarkable, View in Hyde Park, shows how deeply Monet was indebted to Manet in his early days: The simplification of the forms, the restraint in colour, the emphasis on exact rightness of values are all more reminiscent of the older than of the younger master. The growing interest in effects of light appears in two landscapes of the Seine at Rouen and at Argenteuil (14 and 22) in which Monet has-sought to render all the luminosity of a grey day, the result being more personal than the Hyde Park but showing 'no trace of the divisionism which marked the full deveIopMent of Impressionism. Environs d'Argenteuil (6) marks the next stage—the attempt to render direct sunlight effects, though here the effect aimed at is one of subtlety rather than intensity, that of sun on a frosty day, and can therefore. be achieved without the aid of divisionism. The peak of Impressionism which came about 1880 is not very fully represented in the present exhibition. The View of Vetheuil (17), painted in 1878, is as good a landscape, perhaps, as Monet ever achieved, but it is still to a great extent traditional in its technique, whereas the Jardin a Vetheuil of 1881 already has some of the vulgarity which was later to ruin Monet's work and to make much of it no better than that of a Guillaumin.

This vulgarity, which becomes intense in La Mediterranie of 1888, was the inevitable danger facing Impressionism when it grew worn out. The fundamental idea of Impressionism, the use of primary colours to give as much as possible of the intensity of sunlight, was clearly liable to parody in the form of using all the brightest primary colours simply to obtain intensity for its own sake, or alternatively in the form of choosing exclusively subjects containing the maximum brilliance in colour.

Jean IAircat, who is showing gouaches at the Lefevre Gallery, represents a kind of superrealism familiar to the English public and based on the surprise produced by the juxtaposition of very unexpected objects—the same basis ultimately as the wit of Baroque poetry. The trouble with Lureat and with so many of this kind of superrealist painters is that they seem to get obsessed with a particular object, with the result that, after the spectator has seen it in a dozen paintings, the effect of surprise is diminished. One of the important moves which Matisse and his colleagues made about 1906 was the reduction of the human figure to a position of equality with all the other elements in a composition. The Cubists carried on their tradition, but many of the superrealists, particularly Ltircat, have gone a step further. Their htunan figures "are made as insignificant as maybe. Compared with the huge marbled vases which dominate the foreground of his paintings,-Lurcat's figures are but worms. Asrrnorric BLusrr.