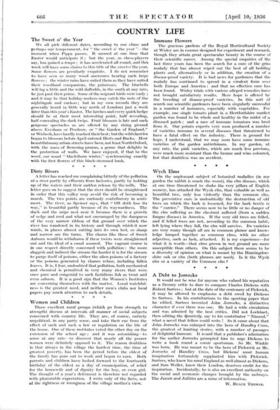 The Sweet o' the Year

We all pick different dates, according to our clime and perhaps our temperament, for "the sweet o' the year "—the moment when Pippa passes. It seemed at one time that Easter would anticipate it ; but the year, as chess-players say, has gained a tempo ; it has accelerated all round, and this week will have some claims to this title of the sweet o' the year. Some flowers are peculiarly exquisite. I do not remember to have seen so many wood anemones bearing such large flowers ; the winter rains have suited them as they have suited their woodland companions, the primroses. The bluebells will lag a little and the wild daffodils, in the south at any rate, be just past their prime. Some of the migrant birds were early ; and it may be that holiday-makers may catch the note of the nightingale and cuckoo ; but in my own records they are generally heard (a little way north of London) just a week later than this year's Easter. The larches and every quick hedge should be at their most interesting point, half revealing, half concealing the dark twigs. Fruit blossom is late and such gorgeous spectacles as arc offered by any rising ground above Evesham or Pershore, or "the Garden of England," or Wisbech, have hardly reached their best ; but the wild cherries began to blossom before April entered Herts and Bucks. How beautiful many urban streets have been, not least North Oxford, with the mass of flowering prunus, a genus that delights in the protection of walls. We have enjoyed, if that be the word, our usual "blackthorn winter," synchronising exactly with the first flowers of this black-stenuned bush.

A letter has reached me complaining bitterly of the pollution of a river partly by effluents from factories, partly by holding up of the waters and their sudden release by the mills. The letter goes on to suggest that the river should be straightened in order that this valley may avoid the risk of becoming a marsh. The two points are curiously contributory in senti- ment. The river, as Spenser says, that 4` Oft cloth lose its way," is beautiful partly because of its waywardness. The duck and the snipe nest near it because there is a growth of sedge and reed and what not encouraged by the dampness of the very narrow ribbon of flat ground over which the river has wandered in its history and through which it now winds, in places almost cutting into its own bed, so sharp and narrow arc the turns. The charm like those 'of Sweet Auburn would be withdrawn if these twists were straightened -- out and the ideal of a canal assured. The vagrant course is in one respect directly concerned with pollution : the more sluggish and indirect the stream the harder it is for the stream to purge itself of poisons, either the alien poisons of a factory or the poisons generated by chance refuse, including fallen leaves. It is, I fear, undoubted that pollution, both mechanical and chemical is permitted in very many rivers that were once pure and congenial to such fastidious fish as trout and even salmon. It is a good sign that the Women's Institutes are concerning themselves with the matter. Local watchful- ness is the greatest need, and neither men's clubs nor local papers pay much attention to such details.

Those excellent rural groups (which go from strength to strength) discuss at intervals all manner of social subjects concerned with country life. They are, of course, entirely unpolitical, in any party sense, and take their cue from the effect of such and such a law or regulation on the life of the home. One of these institutes voted the other day on the extension of the school age ; and it was astonishing—to some at any rate—to discover that nearly all the poorer women were definitely opposed to it. The reason doubtless is that always in the village the hardest time, the time of greatest poverty, has been the period before the eldest of the family has gone out to work and begun to earn. Both parents and children have looked forward to the fourteenth birthday of the eldest as a day of emancipation, of relief for the housewife and of dignity for the boy, or even girl. The thought of a year's deferment is therefore not regarded with pleasurable expectation. I write only of the facts, not of the rightness or wrongness of the village mother's view.

Immune Flowers The gracious gardens of the Royal Horticultural Society at Wisley are in essence designed for experiment and research, though they attain great spectacular beauty in the course of their scientific career. Among the special enquiries of the last three years has been the search for a cure of the grim malady that has almost wiped out the best of all bedding plants and, alternatively or in addition, the creation of a disease-proof variety. It is bad news for gardeners that the malady has continued to spread in a virulent form over both Europe and America ; and that no effective cure has been found. Wisley trials with various alleged remedies have not brought satisfactory results. More hope is offered by the breeding of disease-proof varieties. In this sort of search our scientific gardeners have been singularly successful in a number of instances, especially with vegetables. For example, one single tomato plant in a Hertfordshire market garden was found to be whole and healthy in the midst of ,a diseased patch ; and a race of immune tomatoes was bred from it. Our potato experts very soon produced a number of varieties immune to several diseases that threatened to have a fatal effect on the industry. There is ground for

hope, I understand, that we may soon have some immune varieties of the garden antirrhinum. In my garden, at any rate, the pink varieties, which are much less precious, were much more resistant than the bronze and wine coloured, but that doubtless was an accident.

On the unpleasant subject of botanical maladies (in my garden the rabbit is much the worst), the elm disease, which at one time threatened to shake the very pillars of English scenery, has attacked the Wych elm, that valuable as well as beautiful tree, only less violently, than the .common elm. The preventive cure is undoubtedly the destruction. 'of old trees on which the bark is loosened, for the bark beetle is the "carrier." There seems now to be little or no danger of the elm suffering as the chestnut suffered (from a sudden fungus disease) in America. If the very old trees are felled, and if felled trees are not, according to the conunon habit, left lying where they fall, the elm will survive. Its varieties are very many though all are in common phrase and know- ledge lumped together as common elms, with no other adjective, such as lush, attached. It is my experience—for what it is worth—that elms grown in wet ground are more susceptible than others. On this subject there seems to be a diversity of opinion on what is meant by the Huntingdon- shire oak or elm (both phrases are used). Is it the Wych elm or a variety of the Common elm ?

A Debt to Jorrocks

It would not be wise for anyone who valued his reputation as a literary critic to dare to compare Charles Dickens with Robert Surtees ; but at the date of the centenary of Pickwick, it may be allowed to emphasise a debt owed by Dickens to Surtees. In his contributions to the sporting paper that he edited, Surtees invented John Jorrocks, a distinctive character if ever there was one. He had a wide circulation and was admired by the best critics. Did not Lockhart, then editing the Quarterly, say to his contributor " Ninuud," what a novel that fellow could write I So it came about' that John Jorrocks was enlarged into the hero of Handley Cross, the greatest of hunting stories, with a number of passages of delightful humour. It is said that a publisher's admiration for the earlier Jorrocks prompted him to urge Dickens to write a book round a comic sportsman. So. Mr. Winkle was born. He was meant to be the hero of Pickwick as Mr. Jorrocks of Handley Cross, but Dickens' most human imagination fortunately supplanted him with Pickwick. Surtees, who knew his rural England as well almost as Dickens, and Sam Weller, knew their London, deserves credit for the inspiration. Incidentally, he is also an excellent authority on the social and economic changes brought by the .railways. The Jaunts and Jollities are a mine of information.