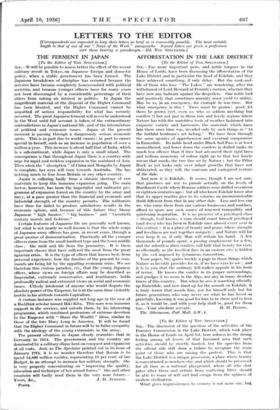 AFFORESTATION IN THE LAKE DISTRICT

• [To the Editor of THE SPECTATOR.] Sra,—Far more important pens, and noble tongues in the House of Lords, have been discussing the afforestation of the Lake District and in particular the head of Eskdale, and they have achieved something, if only delay. But the rank-and- file of those who love "The Lakes" are wondering, after the withdrawal of Lord Howard of Penrith's motion, whether they have now any bulwark against the despoilers. One noble lord said positively that sometimes amenity must yield to utility.

May be so, in an emergency, for example in war-time. But what emergency is this ? Trees must be grown: good, let them be grown (yet, even so, why so seldom anything but conifers ?) but not just in those rare and lovely regions where Nature has with the matchless tools of weather fashioned into exquisite variety and harmonies the materials which have

lain there since time was, invaded only by such things as." to

the faithful herdman's art belong." We have been through the same agonies of apprehension and eventual compromise in Ennerdale. Its noble head under Black Sail Pass is at least =smothered, and lower down the conifers in drilled ranks do much less offence than if they had advanced their rigid lines and tedious monotony of colour right up to that last lonely rowan that marks the tree line set by Nature ; but the Pillar Rock as yet looks only over infant growths that have not obliterated, as they will, the contours and variegated texture of the dale.

And now it is Eskdale. It seems, though I ant not sure, that pinetrees are not to parade actually on the levels of Hardknott Castle where Roman soldiers were drilled seventeen or eighteen centuries ago ; but all who know Eskdale know also that its upper reaches give to its votaries an incommunicable thrill different from that in any other dale. Less and less can we, who come there from our various businesses and routines, afford to spare any such source of renewed tranquillity and quietening inspiration. It is no preserve of a privileged class —though, God knows, a man should count 1 • self privileged (and does) who has been in Eskdale once almost every year in this century ; it is a place of beauty and peace, where strength and loveliness are met together uniquely ; and Nature will for ever keep it so, if only Man will refrain his hand. A few thousands of pounds spent, a passing employment for a few, and the relentless alien conifers will hide that beauty for ever, as effectually as the loveliest face in an eastern city is hidden by the veil imposed by tyrannous convention.

Your paper, Sir, spares weekly a page to those things which Nature so lavishly provides for us, if we have eyes to see ; and it is to you that the ordinary fell-walker appeals in his hoUr of terror. He knows the conifer in its proper surroundings, and grudges it no room in the Alps, nor any in many desolate tracts of this country. But when he sees it marching officially up Ennerdale, and now lined up for the assault on Eskdale, it is truly terror that assails him, not for himself only but for future generations who may never see what he has loved so gratefully, knowing it was good for hun to be there and to love it, as it would be, and with your help shall be, good for them too.—Your obedient servant, H. H. Many. The Athenaeum, Pan Mall, S.W. 1.