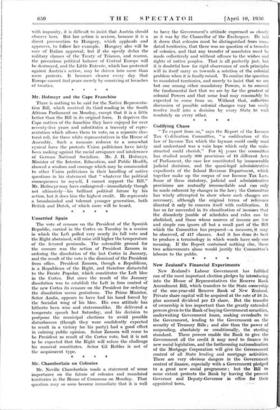 Codifying Chaos "To expect from us," says the Report of

the Income Tax Ccdification Committee, ". a codification of the law of Income Tax which the layman could easily read and understand was a vain hope which only the unin- structed could cherish." For 81 years the committee has studied nearly 800 provisions of 19 different Acts of Parliament, the case law constituted by innumerable judicial decisions, and the quasi-legal administrative expedients of the Inland Revenue Department, which together make up the corpus of our Income Tax Law. Some of these statutory, judicial and , administrative provisions are mutually irreconcilable and can only be made coherent by changes in the law; the Committee has wisely attempted to show where such changes are necessary, although the original terms of reference directed it only to concern itself with codification. It has so far succeeded in its classification of incomes that the disorderly jumble of schedules and rules can he abolished, and those whose sources of income are, few and simple can ignore all but a small part of the Bill which the Committee has prepared—a measure, it may be observed, of 417 clauses. And it has done its best to produce a terminology in which words have only one meaning. If the Report contained nothing, else, these two achievements alone would justify the Committee's labours to the public. * * * *