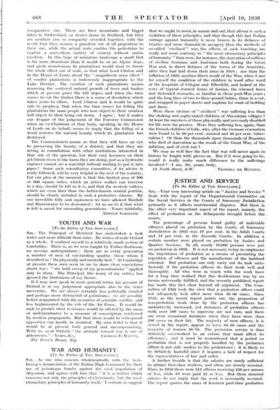 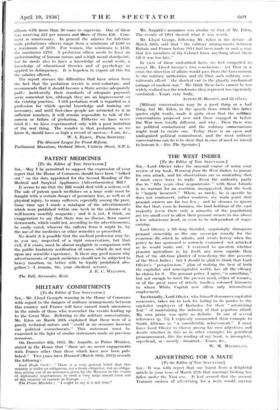 JUSTICE AND SERVICE [To the Editor. of THElp SPECTATOR.] Sin

,—Your very interesting article on ". Justice and Service 7. deals with the report of the Departmental Committee on • the Social Services in the Courts. of Summary Jurisdiction,. primarily as it affects matrimonial disputes. But there. is .. the other very important aspect of the report,: namely, the • effect of probation on the delinquents brought before the...

The percentage of persons. found guilty- .,of indictable. offences placed on probation by the Courts of Summary. Jurisdiction in 1933 was 19 per cent. in the Adult Courts and 54 per cent: in the Juvenile Courts., In. addition a certain number were placed. on - probation by Assizes and Quarter Sessions. In all nearly. 19,000 persons were put on probation in 1933. • It is not necessary today to emphasise the importance of probation as a means of preventing the repetition of offences and the manufacture of the habitual criminal. But probation can only carry out its task satis- factorily if the • probation officers do their work well and . thoroughly. All who were in touch with the work have for a long time realised that this desideratum was by no means universally fulfilled, and the recently published report has made this fact clear beyond all argument. The Com- mittee of 1922 took the view that a probation officer could not adequately look after more than 50-60 cases. Since 1922, as the recent report points out, the proportion of non-probation work done by the probation officers has'- undoubtedly increased, yet instances of probation officers' with over 100 cases to supervise are not rare, and there - are even occasional instances when they have more. than 200 cases on their list. The majority of men officers, it is stated in the report, appear to have 60-80 cases and the majority of women 50-70. The probation service is thus- definitely overworked to an extent that must affect its efficiency ; and it must be remembered that a period on- probation that • is not properly handled by the probation officer is' not only useless to the probationer ; it is likely to be definitely harmful since it inspires a lack of respect for the representatives of law and order.

A further trouble is that the salaries are rarely sufficient • to -attract first-class workers, and often are merely nominal. Thus, in 1934 there were 213 officers receiving /20 per annum or less,. while 83 were paid 25 . or less.. But these nominal salaries do not imply that the work is necessarily. nominal. The report quotes the cases of fourteen part-time probation officers -with more than 50 eases to supervise. One of these was receiving £2.5 per annum; and tkeree of them 150. Com- ment is unnecessary. In general the salaries for full-time male probationer officers range from a minimum of £180 to a maximum of £370. For women, the minimum is £150, the maximum. £270. A probation officer needs to have an understanding of human nature and a high moral standpoint, but he needs also to have a knowledge of social work, a knowledge of educational theories and of psychology as applied to delinquency. It is hopeless to expect- all this for the salaries offered.

The report stresses the difficulties that have arisen from the fact that the probation service is semi-voluntary, and reeonunends that it should become a State service adequately paid : incidentally their standards of adequate payment seem somewhat low, although they are an improvement on the existing practice. Until probation work is regarded as a profession for which special knowledge and training are necessary,. and until first-class people are attracted to it in sufficient numbers, it will remain impossible to talk of the sueeess or :failure of probation.. hitherto we have never tried it : we have experimented only with a poor imitation of the real thing. The wonder is that probation, as we know it, should have so high a record of success.—! am, &c., W. A. ELKIN, Press Secretary. The Howard League for Penal Reform, • Parliament Mansions, Orchard Street, Victoria Street, S.TV.1.