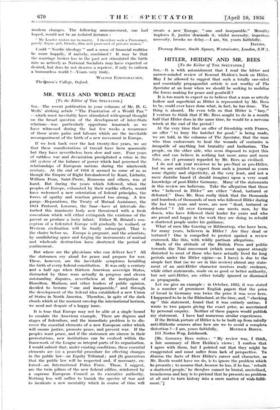 [To the Editor of THE SPECTATOR.] SIR,—It is with astonishment that I read the bitter and narrow-minded review of Konrad Heiden's book on Hitler. May I be allowed; to suggest that such a totally one-sided and essentially propagandist article is not worthy of The Spectator at an hour when we should be seeking to mobilise the forces making for peace and goodwill ?

hollow and superficial as Hitler is represented by Mr. Rees to be, could ever have done what, in fact, he has done. The thing is absurd. He even tells us that Hitler is "lazy." I venture to think that if Mr. Rees sought to do in a month half that Hitler does in the same time, he would be a nervous wreck at the end of the period !

At the very time that an offer of friendship with France,

an offer "to bury the hatchet for good," is being made, we are told, in the columns of The Spectator, that the man who thus endeavours to heal the wounds of' centuries is incapable of anything but brutality and barbarism. The people, on the other side, who seem disposed to reject this offer and can believe in nothing but more• arms and more forts, are (I presume) regarded by Mr. Rees as civilised.

I do not ask your reviewer to be pro-Nazi Or pro-Hitler, but we are entitled to expect from such a journal as yours some dignity and objectivity, at the very least, and not a mere diatribe based (I should imagine) upon a very scant knowledge of post-Hitler Germany. Many of the statements in this review are ludicrous. Take the allegation that those who "believed in Hitler" are either "dead, tortured or defeated." Does Mr. Rees really think that the thousands and hundreds of thousands of men who followed Hitler' during the last ten years and more, are now "dead, tortured or defeated " ? All over Germany one meets men, by The dozen, who have followed their leader for years and who are proud and happy in the work they are doing to rebuild a shattered people wider his guidance.

What of men like Goering or Ribbentrop, who have been, for many years, believers in Hitler ? Are they dead or tortured ? One is compelled to protest against a review crammed, like this, with wildly partisan allegations.

Much of the attitude of the British Press and public towards the Nazi movement (which must appear strongly distorted to most of those who have actually lived for long periods under the Hitler regime—as I have) is due to the simple fact that (as we see in this review) almost any state- ment of an anti-Hitler character receives ready credenee, while other statements, made on as good or better authority, but not anti-Hitler, are either totally ignored or dismisfied as propaganda.

Let me give an example : in October, 1935, it was stated in a number of prominent English papers that the price of bread in Germany was twice the price it was over here. I happened to be in the Rhineland, at the time, and, " checking up" this statement, found that it was entirely untrue.. I wrote to two papers giving the exact price, as ascertained by personal enquiry. Neither of these papers would publish my statement. I have had numerous similar experiences.

distortion ?—I am, yours faithfully, MEYRICH Boom. 111 Norton Way, Letchworth.

[Mr. Goronwy Rees writes : "My review was, I think, a fair summary of Herr Heiden's views ; I confess that I agree with them, but I pointed out that they might be exaggerated and must suffer from lack of perspective. To dismiss the facts of Herr Hitler's career and character, as Mr. Booth would have me do, is to ignore the problem which he presents ; to assume that, because he has, if he has, 'rebuilt a shattered people,' he therefore cannot be brutal, uncivilised, treacherous and lazy is to pretend that he presents no problem at all and to turn history into a mere matter of wish-fulfil. meat."]