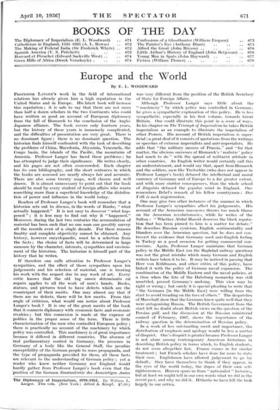 Europe and the World

BOOKS OF THE DAY By E. L. WOODWARD PROFESSOR LANCER'S work in the field of international relations has already given him a high reputation in the United States and in Europe. His latest book will increase this reputation ; it is safe to say that there are not more than half a dozen scholars in the two Continents who could have written so good an account of European diplomacy from the fall of Bismarck to the conclusion of the Anglo- Japanese alliance. The book covers only fourteen years, but the history of these years is immensely complicated, and the difficulties of presentation are very great. There is no dominant figure ; there is no dominant question. The historian finds himself confronted with the task of describing the problems of China, Macedonia, Abyssinia, Venezuela, the Congo basin, the islands of the Pacific, the mountains of Armenia. Professor Langer has faced these problems ; he has attempted to judge their significance. He writes clearly, and his pages are not often overcrowded. Each chapter has its own bibliography, and the short sentences in which the books are assessed are nearly always fair and accurate. There are also some twenty maps, well chosen and well drawn. It is almost unnecessary to point out that the book should be read by every student of foreign affairs who wants 'something more than a superficial knowledge of the distribu- tion of power and influence in the world today.

Readers of Professor Langer's book will remember that a historian sets out to discuss, in the words of Ranke, "what actually happened." It is not easy to discover "what hap- pened " ; it is less easy to find out why it "happened." Moreover, during the last two centuries the accumulation of material has been such that no one man can possibly survey all the records even of a single decade. For these reasons finality and complete objectivity cannot be obtained. Any history, however encyclopaedic, must be a selection from the facts ; the choice of facts will be determined in large measure by the character, interests, sympathies and environ- ment of the historian. The historian is himself part of the history that he writes.

If therefore one calls attention to Professor Langer's sympathies, and the effect of those sympathies upon his judgements and his selection of material, one is treating his work with the respect due to any work of art. Every critic knows that the old tag otntlis determinatio est tnegatio applies to all the work of men's hands. Books, , statues, and pictures tend to have defects which are the counterpart of their merits. One may almost say that if there are no defects, there will be few merits. From this angle of criticism, what would one notice about Professor Langer's book ? It is one of the great merits of the book that it connects diplomacy with economic facts and economic rivalries ; but this connexion is made at the expense of polities in the proper sense of the term. There is little characterisation of the men who controlled European policy ; there is practically no account of the machinery by which policy was controlled. This machinery is of great importance because it differed in different countries. The absence of real parliamentary, control in Germany, the presence in Germany of a body like the General Staff, the peculiar ,susceptibility of the German people to mass propaganda, and the type of propaganda provided for them, all these facts are relevant to the understanding of German policy ; yet a reader who knew neither Germany nor England would hardly gather from Professor Langer's book even that the position of the German Staalasekrelar des Auswartigen Andes

The Diplomacy of Imperialism, 1890-1902. By William L. Langor. Two vols. (New York : Alfred A. Knopf. $7.50.) was very different from the position of the British Secretary of State for Foreign Affairs.

Although Professor Langer says little about the " machinery " by which policy was controlled in Germany, he gives a sympathetic explanation of this policy. He is less

sympathetic, especially in his first volume, towards Great Britain. One could illustrate this point in a score of ways. In his chapter on The Triumph of Imperialism he takes British imperialism as an example to illustrate the imperialism of other Powers. His account of British imperialism is super- ficial ; a great deal of it consists of quotations from the writings or speeches of extreme imperialists and anti-imperialists. Ile adds that ", the military success of Prussia," and "for that matter, the obvious successes of Bismarck's ' realistic ' policy had much to do" with the spread of militarist attitude in other countries. An English writer would certainly call this an understatement, and would say that, apart from Bismarck and the soldiers, men like Treitschke (who does not appear in Professor Langer's book) debased the intellectual and Moral currency of Germany and of Europe to a far greater extent, and with more sinister consequences, than the whole school of Jingoists debased the popular mind in England. One remembers Bebel's remark of his fellow countrymen : Dos Volk is noel: siegestrunken.

• One may give two other instances of the manner in which Professor Langer's sympathies affect his judgements. His account of the Armenian massacres throws too much blame on the Armenian revolutionaries, while he writes of the Sultan : • "Whether Abdul Harnid deserves the black reputa- tion that has been pinned to him is a matter for debate." He describes Russian cynicism, English sentimentality and blunders over the Armenian question, but he does not con- trovert the evidence that Germany used anti-English feeling in Turkey as a good occasion for getting commercial con- cessions. Again, Professor Langer maintains that German policy in the Middle East (on the Baghdad railway question) was not the great mistake which many German and English writers have taken it to be. It may be noticed in passing that Herr von Kiihlmann, and other critics of this policy, have linked it with the policy of German naval expansion. The combination of the Middle Eastern and the naval policies, at a time when the fate of the Habsburg monarchy was still unsettled, proved Germany's undoing. This view may be right or wrong ; but surely it is special pleading to write that "the Germans [in the Middle East] were willing from the start to avoid treading on the toes of others." The despatches of Marsehall show that the Germans knew quite well that they were antagonising Russia. The British Government from the start left no doubt about British views on the question of the Persian gulf, and the dismission at the Russian ministerial council of February, 1907, shows the imcortance of the railway question in the determination of Rus4ian policy.

In a work of less outstanding merit and importance, the distribution of emphasis and apology would be less a matter 'of disquiet. One's disquiet is greater because Professor Langer is not alone among contemporary American historians in describing British policy in terms which, to English students, do not seem altogether fair. France comes in for similar treatment ; but French scholars have done far more to state their ease. Englishmen have allowed judgement to go by default; they have themselves to thank if they appear, in the eyes of the world today, the dupes of their own self- righteousness. Heaven spare us from "nationalist " histories, but at least we might tell in our own words what we did in the recent past, and why we did it. Hitherto we have left the task largely to our critics.