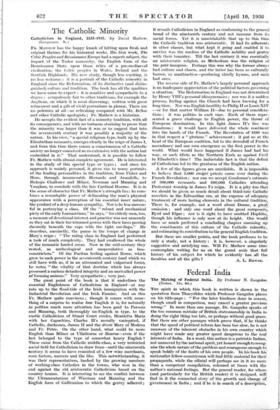 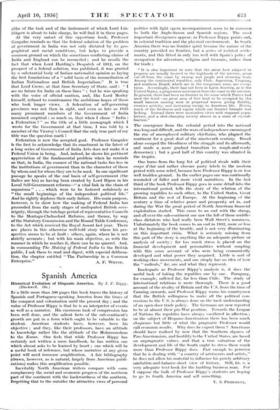 Federal India Tits spirit in which this book is written

is shown in the quotation from Thucydides which Professor Gangulee places on his title-page : "For the later kindness done in season, though small in comparison, may cancel a greater previous wrong." In more than one passage, Dr. Gangalee speaks of the too common mistake of British statesmanship in India in doing the right thing too late, or perhaps without good grace. But there are other passages which prove that, if he thinks that the speed of political reform has been too slow, he is not unaware of the inherent obstacles in his own country which might have made any greater speed dangerous to the real interests of India. In a word, this author is a patriotic Indian, not unmoved by the national spirit, yet honest enough to recog- nise the whole nature of the problem and courageous enough to speak boldly of the faults of his own people. In his book his nationalist fellow-countrymen will find little material for their propaganda, while the official will perhaps see in it no more than a competent compilation, coloured at times with the author's national feelings. But the general reader, for whom (and particularly for the British reader) it is designed, wilt find in ft the connected story of the growth an.d change Of goVernment in India ; and if he is in search of a descriptiim,

alike of the task and of the instrument of which Lord Lin- lithgow is about to take charge, he will find it in these pages.

At the very outset of this opportune book, Professor Gangulee reminds us that the federal solution of the problem of government in India was not only dictated by its geo- graphical and racial conditions, but helps to provide a common ground on which the sometimes conflicting claims of India and England can be reconciled ; and he recalls the fact that when Lord Harding's Despatch of 1912, on the prospect of a federal solution, was published, it was greeted by a substantial body of Indian nationalist opinion as laying the first foundations of a "solid basis of the reconciliation of Indian Nationalism and British Imperialism." It is true that Lord Crewe, at that time Secretary of State, said : "I see no future for India on these lines " ; but he was speaking with the voice of official caution, and, like Lord Morley himself, refused to countenance the ambitious hopes of those who took longer views. A federation of self-governing provinces was not then in sight, and even as late as 1925 many prominent members of the Government of India remained sceptical : so much so, that when I chose India : a Federation ? " as the title of a little monograph which I wrote for the Government at that time, I was told by a member of the Viceroy's Council that the only true part of my title was the question mark

Federation is now the accepted goal. Professor Gangulee Is the first to acknowledge that its enactment in the latest of a long series of Government of India Acts does not make it a Federal Union in being. And, indeed, he shows his pertinent appreciation of the fundamental problem when he reminds us that, in India, the essence of the national tasks lies less in the institutions of government than in the character of those by whom and for whom thei are to be used. In one significant passage he speaks of the real basis of self-government (the Italics are his) as having been created by Lord Ripon in his Local Self-Government reforms—" a vital link in the chain of organisms" . . . which were to be fostered sedulously as "the small beginnings of the independent political life." And he rightly deplores their early failure. His main purpose, however, is to show how the making of Federal India has proceeded from the early stages of undisputed British sove- reignty, through the tutelage period of representative Councils to the Montagu-Chelmsford Reforms, and thence, by way of the Statutory Commission and the Round Table Conference, to the Act which received the Royal Assent last year. There are places in this otherwise well-told story where his per- spective seems to be at fault : others, again, where he is not strictly accurate ; but with his main objective, as with the manner in which he reaches it, there can be no quarrel. And, In commending The Making of Federal India to the British public, I ask them to read and digest, with especial delibera- tion, the chapter entitled "The Partnership in a Common