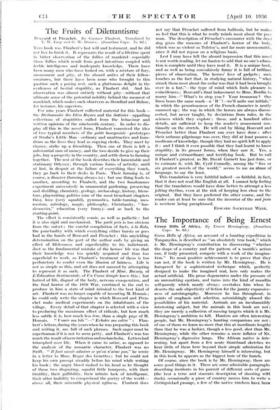 Wt.:yard at Pecuchet. By Gustave Flaubert. Translated by T. W. Burp and G. W. Stonier. (Jonathan Cape. is. 6d.) Tins book was Flaubert's last will and testament, and he did not live to finish it. It represents the result of a lifetime spent ia bitter observation of the follies of mankind--especially those follies which result from good intentions coupled with feeble intelligence and inadequate knowledge. There have been many men who have looked on, with a mixture of fury, amusement and pity, at the absurd antics of their fellow- creatures, but there have been none who brought to this pastime such a poring zest, such a gluttonous delight in the evidences of bestial stupidity, as Flaubert did. And his observation was almost entirely without pity—without that ultimate sense of the potential nobility behind the meanest of mankind, which makes such observers as Stendhal and Balzac, for instance, his superiors.

For nine years Flaubert collected material for this book— the Dictionnaire des Idies Revues and the Sottisier—appalling collections of stupidities culled from the behaviour and written opinions of the nineteenth century. In order to dis- play all this in the novel form, Flaubert conceived the idea of two typical members of the petite bourgeoisie—prototypes of Strube's Little Man—ordinary and unattractive and hum- drum as the lives they lead as copying clerks. They meet by chance, strike up a friendship. Then one of them is left a substantial sum of money, and the two decide to give up their jobs, buy a property in the country, and settle down to fanning together. The rest of the book describes their lamentable and stationary Odyssey, through various forms of activity, until at last, in despair at the failure of everything they touch, they go back to their desks in Paris. Their farming is, of course, a disaster (farming always is) ; but one thing leads to another, according to Flaubert, and the two bonshommes experiment successively in ornamental gardening, preserving and distilling, chemistry, geology, archaeology, history, litera- ture, playwriting, politics (one of the most trenchant chapters this), love (very squalid), gymnastics, table-turning, mes- merism, astrology, magic, philosophy, Christianity, " bon- dieuseries," education (very funny)—and so back to the starting-point.

The effect is consistently comic, as well as pathetic ; but it is also rigid and mechanical. The parti pris is too obvious from the outset ; the careful compilation of facts, ei la Zola, the punctuality with which everything either bursts or goes bad in the hands of Bouvard and Pecuchet : this unyielding determination on the part of the author ends by giving an effect of lifelessness and superficiality to his indictment. Just as the fundamental mistake of the heroes' life was that their knowledge was too quickly acquired and thus too superficial to work, so Flaubert's treatment of them is too perfunctory to confer even the illusion of fairness. Life is not as simple as this, and art does not succeed by attempting to represent it as such. The Flaubert of Mme. /*wary, of L'Education Sentimentale, of tin Coeur Simple knew this ; but hatred of life, disgust of the body, nervous exasperation, and the final horror of the 1870 War, combined in the end to produce in him a state of mind inimical to the best kind of art. Flaubert was no longer capable of inventing M. Homais ; he could only write the chapter in which Bouvard and Peen- ehet make medical experiments on the inhabitants of the village. Every detail of that chapter is selected with a view to producing the maximum effect of ridicule, but how much less subtle it is, how much less true, than a single page of M. Homais. " Vomir ma bile"—" Exhaler ma colere" : Flau- bert's letters, during the years when he was preparing this book and writing it, are full of such phrases. Such anger must be superhuman if it is not to seem petty, and Flaubert's was too much the result of mere irritation and melancholia. Letters had triumphed over life. When it came to satire, as opposed to the analysis of the romantic character, Flaubert was no Swift. "lifaut savoir admirer cc qu'on n'ainte pas," he wrote in a letter to Mme. Roger des Genetics; but he could not keep his own precept steadily before his mind while writing his book ; the angry blood rushed to his head as he thought of those two disgusting, squalid little bourgeois, with their timidity, their gullibility, their infinite lack of intelligence, their utter inability to comprehend the poetry of the world— above all, their miserable physical ugliness. Flaubert .does

not say that Pecuehet suffered from halitosis, but he makes us feel that this is what he really minds most about the poor man. The description of Pecuchet's encounter with the dead dog g;ves the measure of Flaubert's horror of the body, which was as violent as Tolstoy's, and far more unreasonable, since it did not repose on a religious basis.

Lest I may have left the absurd impression that this novel is not worth reading, let me hasten to add that no one's educa- tion-is complete until they have read it. It is a unique book, and as well as being convulsively funny it is full of brilliant pieces of observation. The heroes' love of gadgets ; such touches as the fact that, in studying natural history, "what struck them most about the cedar was that it had been brought over in a hat,"—the type of mind which finds pleasure in coincidences ; Bouvard's final inducement to Mme. Bordiri to marry him—" What's to stop you ? Your trousseau ? Our linen bears the same mark—a ' B ' !—we'll unite our initials," in which the penuriousness of the French character is neatly summed up ;' the way in which the heroes are always discon- certed, but never taught, by deviations from rules, in the sciences which they explore : these, and a hundred other details, are sufficient to keep the reader's amusement con- tinually on the stretch. He will end by liking .Bouvard and Pecuchet better than Flaubert can ever have done : after their arduous pilgrimage was over, they did at least possess a modicum of knowledge, though they had no spirit left to apply it ; and I think it even possible that they had learnt to know stupidity, in its grosser forms, when they saw it.. Yes, a unique and extraordinary and terrifying book. But to call it Flaubert's greatest: as Mr. David Garnett has just done, or to estimate it, with Mr. Cyril Connolly, among the "five or six greatest novels of the world," seems to me an abuse of language, to say the least.

This translation is very faithful indeed—so faithful, in fact, that it does not read like English at all. I cannot help feeling that the translators would have .doile better to attempt a less jolting rhythm, even at the risk of keeping less close to the original. But they have preferred the other course, and the reader can at least be sure that the inventor of the mot juste is nowhere being paraphrased.