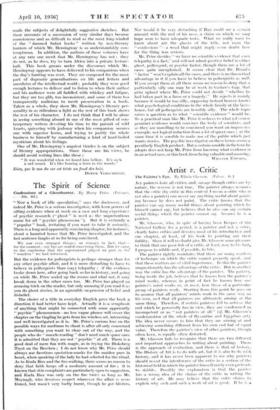 The Spirit of Science

a book of idle speculation," says the dustcover, and indeed Mr. Price is a serious investigator, with keen powers of sifting evidence when at work on a case and long experience of psychic research (" ghost " is used a: the unpretentious name for all " psychic phenomena "). But it is certainly a " popular" book, irritating if you went to take it seriously. There is a long and apparently convincing chapter, for instance, about a haunted house that Mr. Price investigated, and the last sentence laughs at us for being convinced.

We saw even stranger things ; so strange, in fact, that— for the moment—my lips arc scaled concerning them. But we earn° to the conclusion that the supernormal played no part in the. " wonders " we had witnessed.

But the evidence for poltergeists is perhaps stronger than for any other psychic affair, and it is more disturbing to have to believe in poltergeists than (say) telepathy ; if the evidence broke down here, after going back so far in history, and going AIM while Mr. Price sealed up the rooms and what not, it may break down in the other eases too. Mr. Price has played an amusing trick on the reader, but only amusing if you read it as you do ghost stories, in an agreeable suspension of belief and disbelief.

. ; The choice of a title in everyday English gave the book a direction it had better have kept. Actually it is a scrapbook of anything that might be connected with some apparently " psychic" phenomenon—no less vague phrase will cover the chapter on the tingling he gets from his wireless set, interesting and well investigated as it is. Mr. Price's curious lore on the possible ways for mediums to cheat is after all only concerned with something you want to clear out of the way, and the people who do " muscle-reading " don't need much space once it is admitted that they are not " psychic " at all. There is it good deal of- mere fun with magic, as in trying the Bloktiberg .Tryst on the Broeken ; I do not know why Mr. Price should always use facetious. quotation-marks for the maiden pure fu heart, when speaking of the lady he had selected for the ritual. As to Kuria Bux and the fire-walking, there seems no reason to deny that faith keeps off a moderate amount of fire ; it is 16:101911 that skin complaints are particularly open to suggestion, and Kuda Bux was only on-the fire twice as long as -Mr. Moynagh, who deserves respect whenever the affair is men- tioned,. but wasn't very badly burnt, though he got- blisters.

Nor sNould it be very disturbing if Bux could see a et-rtain amount with the end of his nose, a claim on which we may hope soon to have adequate tests. What we really want to know about are the ghosts of the title, not even the " confessions "—a word that might imply some doubt how far the thing was serious.

Mr. Price decides " we have no scientific evidence that even telepathy is a fact," and will not admit positive belief in either ghost, poltergeist, or psychic factor, though there are a lot of eases quite unexplained. It seems clear that Dr. Broad's " factor " won't explain all the cases, and there is no theoret lea' advantage in it if you have to believe in poltergeists as well. If you accept them at all there seems no reason to deny that a particularly silly one may be at work in tashen's Gap, that grim upland where Mr. Price could not decide " whether he had taken part in a farce or a tragedy." lie rejects it mainly because it would be too silly, supposing instead heaven knows what psychological conditions in the whole family at the farm- house, but all poltergeists are horribly silly. 'The whole topic raises a question as to what " scientific idenee " would be. Ti) a practical man like Mr. Price it reduces to what (of course genuine) evidence would convince the body of scientists, and as they are unwilling to be convinced you want an impressive example, not logical induction from a lot of queer ones ; at the same thud it is sensible to make use of the public which just wants stories. The psychic investigator on these terms seems a peculiarly English product. But a certain muddle in the tone he adopts does not keep Mr. Price from knowing what evidence is in an actual ease, or this book from being valuable and an iusing.