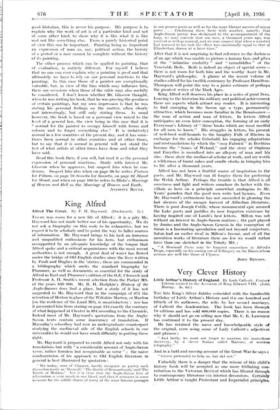 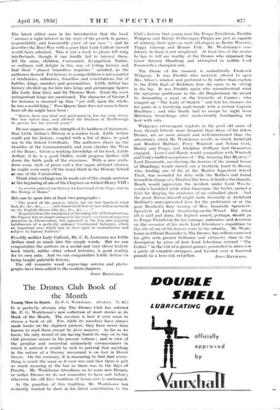 Little Arthur's History of England. By Lady Calleott. Century Edition revised to the Accession of King Edward Viii. (John Murray. 3s. Oct.) TI1E late King's Silver Jubilee coincided with the hundredth birthday of Little Arthur's History and the one hundred and fiftieth of its authoress, the wife, by her second marriage, of Calkott the Academician. The book has been through 70 editions and has sold 800,000 copies. There is no reason why it should not go on selling now that Mr. C. E. Lawrence has continued it to the present day.

He has retained the naive and knowledgeable style of the original, even using some of Lady Callmitt's adjectives and phrases :

"And lastly, we must not forget to mention the roarvellotst discovery, by a clever Italian called Marconi, of wireless telegraphy."

And in a bald and moving account of the Great I'Var he says "Greece pretended to help Us, but did not."

Unluckily there is a danger that the reissue of this child's history book will be accepted as one more titillating con- tribution to the Victorian Revival which has filtered throught to contemporary literature ria interior decorators. Certain* Little Arthur is taught Protestant and Imperialist principles.

The latest editor says in his introduction that the book "amuses a right interest in the story of the growth in power, responsibility and honourable glory of our race " ; and he describes the Boer War with a grace that Lady Calleott herself would have admired. This is not a book to please left-wing Intellectuals, though it can hardly fail to interest them. All the same, children, Conimunist, Evangelical, Nudist, or ordinary will delight in this way of telling history and find their "almost boundless. inquiries" satisfied, as the

authoress desired. For history to young children is not a matter of tendencies, influences, franchise and constitutions but of

battles, kings, murders and personalities. Little Arthur has history divided up for him into kings and picturesque figures like Lady Jane Grey and Sir Thomas More. Even the most unimportant kings are mentioned. The character of George I

for instance is summed up thus "yet still, upon the whole, he was a useful king." Poor Queen Anne does not seem to have been all she might have been :

"Queen Anne was kind and good-natured, but not very clever. She was rather lazy, and allowed the Duchess of Marlborough to govern her for several years."

Do not suppose, on the strength of its baldness of statement, that Little Arthur's History is a useless book. Little Arthur could put his history, coupled with a list of dates, to good use in the School Certificate. The authoress dears up the troubles of the Commonwealth and even clarifies the Wars of the Roses. Given a working knowledge of his book, Little Arthur, if he is a good bluffer, could progress further still down the futile path of the examinee. With a nice sixth- form essay style of prose and a few vague abstract clauses, he might even carry off the usual third in the History School

a one of the Universities.

Think what verbiage can be made out of this simple sentence

at the beginning of one of the Chapters on wicked Henry VIII: " In several parts of our history we have read of the Pope, that is, the Bishop of Rome."

this can be spun into at least two paragraphs :

". The power of the papacy, which, for the last hundred years had, &c., &e., . now found itself face to face with a monarch on the English throne who &e., &c., &c. . . ." "Regarded from the standpoint of the rising tide of ProtAastantism, the Papacy was no longer arrayed in tho costly vestiture of supreme dominion in Christendom, but appeared in the less awe-inspiring habiliments of & perfectly ordinary Continental bishopric, albeit. an important one, which was at once open to contradiction and Subject to human frailties."

The old romantic wood engravings survive and photo- graphs have been added to the modern chapters.