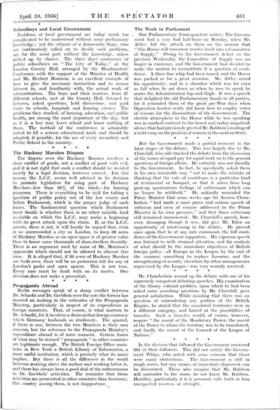 The Week in Parliament . Our Parliamentary Correspondent writes :

The Govern- ment had a very bad half-hour on Monday, when Mr. Attlee led the attack on them on the motion that "this House will tomorrow resolve itself into a Committee of Supply." Owing to the Government defeat on the previous Wednesday the Committee of Supply was no longer in existence, and the Government had decided to make the motion to reconstitute it a question of confi- dence. A three-line whip had been issued, and the House was packed as for a great occasion. Mr. Attlee seized his opportunity, and in a chamber which was for once as full when he sat down as when he rose to speak he smote the Administration hip and thigh. It was a speech that delighted the oldParliamentary hands in all parties, for it reminded them of the great pre-War days when Opposition leaders really did know how to employ votes of censure for the discomfiture of the Government. The electric atmosphere in the House while he was speaking was in marked contrast to the bored and rather impatient silence that had previously greeted Mr. Baldwin's reading of a mild essay on the position of woman in the modern State.