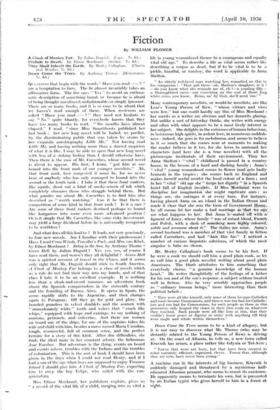 A Cloak of Monkey Fur. By Julian Duguid. (Cape. 7s. 6d.) Prelude to .Death. By Elinor Mordaunt. (Seeker. 7s. 6d.) They Shall Inherit the Earth. By. Morley Callaghan. (Chatto

Down Come the Trees. By Anthony Thorne. (Heinemann. 7s. M.) QUESTIONS that begin with the words "Have you read ? "

are a temptation to liars. The lie almost invariably takes an affirmative form. The liar says " Yes " to avoid an enthusi- astic description of something banal, or because he is afraid of being thought uncultured, unfashionable, or simply ignorant. There are so many books, and it is so easy to be afraid that we haven't read enough of them. When eViewers are asked "Have you read ? " they need not hesitate to say " No " quite bluntly, for everybody knows that they have too many books to read. "Six months have almost elapsed," I read, "since Miss Smartiboots published her

last book : her new long novel will be hailed, we predict, by . the discriminating public that was taken. by Storm by her exquisite autobiography Little Me." *Not having read Little Me, and having nothing more than a shrewd Suspicion

of what it is like. I may be able to open that new long novel with less of a sinking feeling than I should* otherwise have. Then there is the case of Mr. Corot:tikes, whose second novel

is about to appear. His first, I learn, "put .him at one bound into the front rank of our younger noVelists." Aim, that front rank, how congested it *must be, for we ncver hear of anybody who has only managed to bound inth the second or the tenth rank : I take it that these front rankers,* like squids, shoot out a kind of smoke-semen Of ink which completely obscures those who_ straggle behind then'. But

what puzzles me about Mr. Caeoethes is to find hint also described as " worth watching." Can it be that there is competition of some kind in that front rank ? Is it a race ? Are some of those front rankers destined perhaps to bound, like kangaroos into some even more advanced position ? Or is it simply that Mr. Caeoethes, like some risky investment, may yield a large dividend before he is universally recognised to be worthless ?

And what does all this lead to ? It leads, not very graciously, to four new novels. Am I familiar with their predecessors.?

Have I read Cross Winds, Traveller's Pack, and Mrs. van Meek, by Elinor Mordaunt ? Delay in the Sun, by Anthony Thorne ?

Green Hell, by Julian Duguid ? Yes, yes, yes, of course I have read them, and weren't they all delightful ? Green Hell was a spirited account of travel in the Chaco, and it seems

only:right that Mr. Duguid should stick to South America. A Cloak of Monkey Fur belongs to a class of novels which

as a rule do not find their way into my hands, and of that class I take it to be an excellent example. It is nothing

less than a cloak-and-sword romance, an adventure book about the Spanish conquistadors in the sixteenth century and the founding of Buenos Aires, It opens in Spain, the scene rapidly shifts to the Argentine, and then changes again to Paraguay. Off they go for gold and glory, the bearded grandees in velvet doublets and the seamen with "immoderately white" teeth and voices that "crack like whips," equipped with hope and earrings, to say nothing of morions, petronels, and culverins. And there are women on board one of the ships, for one of the captains takes his wife and child with him, besides a nurse named Maria Uzeudun, tough, resourceful, full of common sense, and the perfect heroine for a story of this kind. After due difficulties, she finds the ideal mate in her constant adorer, the helmsman Jose Escobar. . But adventure is the thing, events on board and events ashore, troubles with the Indians and the troubles

of colonisation. This is the sort of book I should have been given in the days when I .could not read Henty, and if I had a son of the age when boys are supposed to enjoy Treasure

Island I should give him A Cloak of Monkey Fur, expecting hint to envy the boy Felipe, who sailed with the con- quistadors.

Miss Elinor Mordaunt, her publishers explain, gives us ." a record of the vital life of a child, merging into as vital a life in young womanhood thence to acourageous and equally Vital old age." To describe a life as vital seems rather like describing a corpse as dead, but if to be, vital. is to be a

pickle, handful, or tomboy, the word is applicable to Anna

"An elderly red-faced man watching her, remarked on this to his companion : 'That girl there—oh, Shelton's daughter, is it ? —do you know what she reminds me of, eh ?—a yearling filly— a thoroughbred racer—out exercising on the end of those long white reins, you know. Reins, an' by Gad, she'll need 'em.'"

Many contemporary novelists, or would-be novelists, are like Lear's Young Person of Kew, "whose . virtues and vices were few," but one could hardly say this of Miss Mordaunt : her merits as a writer are obvious and her demerits glaring.

Not unlike a sort of lalterday Ouida, she writes with energy and often with what appears to be a most lively interest in her subject. She delights in the extremes of human behaviour, in boisterous high spirits, in ardent love, in monstrous caddish- ness—indeed, she goes in for melodrama, and seems to believe in it so much that she comes near at moments to making the reader believe in it too, for she loves to surround her characters (and here she is a true novelist) with all the picturesque incidentals of their environment. Thus her Anna Shelton's " vital " childhood is passed in a country house, in the bosom of a hard and dashing family ; Anna's " vital " young womanhood comes to flower (and gets badly bruised) in the tropics ; she comes baek to England and makes herself useful amidst the local colour of a farm ; and

in her ". vital" Old age she"" keePs her dignuitY" in a Spanish hotel :Tull of .English invalids..' If Miss 'Mordatint were to

discipline her imaginatintr she's -might calatiVate ours : as things are, she outrages it at every turn. For instance, .'

having placed Anna on an island in the Indian Ocean -find made it .clear that she was the Gem of Government kionsg,. by all means let her make -Et bad marriage i;o?that k see what. happens to .her: But' Annals snuitid 44E with 41' figment of fancy, whose family " was of:mixed:Wood,- French, and Polish, with a dash of soviet/ling:4040ft highly- coloured,* subtle and sensuous about it." • TheJtalies.iire mine Ariria's second husband was a inelniter of ;that-vast family in fietion called Carruthers, . and had "hair like fur." noticed a- number of curious linguistic solecisms, of which the most singular is baba an rheum.

Mr. Morley Callaghan's book seems to be his first. If he were a cook we should call him a good plain cook, so let us call him a good plain novelist writing about good plain' Americans. The blurb attributes to him something that everybody claims, "a genuine knowledge of the human heart." He writes thoughtfully of the feelings of a father for his son and of the son's response, a Subject seldom treated well in fiction. Also he very sensibly approaches people as "ordinary human beings," more interesting than their political beliefs :

"They were all like himself, only some of them became Catholics and some became Communists, and then it was too bad for Catholic- ism and too bad for .Communism, for such people as these in this generation only heaped the chaos in their own souls on whatever they touched. Such people were all like -him in this, that they couldn't know peace or dignity or unity with anything till they were single and whole within themselves."

Down Come the Trees seems to be a kind of allegory, but it is not cagy to discover what Mr. Thorne (who may be distantly related tO the Young Person of Kew) is driving

at. *On the coast of Albania, he tells us, a new town called liravnik has arisen, a place rather like Gdynia' or Tel-Aviv ;

"Towns that were not born, but that have been created in robot maturity, efficient, organised, clever. Towns that, although they are new, have never been young."

A ,machine run in the .interests of big business, Kravnik is suddenly _damaged and threatenixl by a mysterious half- educated Albanian peasant, who seems to resent its existence. He apparently means to terminate his own, but is prevented by an Italian typist who gives herself to .him in a forest at night.