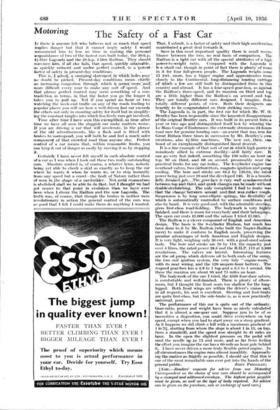 Motoring The Safety of a Fast Car there is anyone

left who believes not so much that speed implies danger but that it cannot imply -safety I would recommend him to lose no time in making the personal acquaintance of two of the fastest cars built today, the 30-h.p. 44-litre Lagonda and the 28-hp. 4-litre Renton. They should convince hira, if all else fails, that speed; quickly attainable, -- as quickly reduced and 'Under- perfect control, -is- a 'potent: &dor of safety in present-day conditions. . - This is Kidlnit; a slirePP:hli statentent ri iuc hates PriaY•: no doubt be picked. Present-day conditions mean. chiefly an increasing congestion through which it litseimi:mtire-nact: snore difficult every year to Make any sort ospeed. -And that phrase perfect control may seem something- of a con- tradiction in terms, in that the faster You go the longer it takes' you to -pull up. Yet if you -spend 'an-hour or -two - watching the week-end traffic on any of the roads leading to popular places yoti will see how a well-driven fast -car exceeds U e others not only in ensuring safety for itself but in Simplify- ing the constant tangles into which less lively cars-get involved: Time after tirne I }love-semth eseinplifteil. as time sitter time we have all seen the sluggish car make matters worse. If you are driving a- car that Will accelerate, in the phrase of the old advertisements, like a flash and is fitted with brakes to 'correspond, you will both be and feel a Much' eater component of that crowded road than anyone else. Perfect control of a ear means that, within reasonable limits, you can keep it out of danger as easily by nursing it as by stopping it.

Certainty I have. never -felt myself in -such absolute control - of a car as I was when I took out these two really outstanding cars. Absolute control is, of course, a relative term, nobody being yet .ablerto check a skid so exactly as to keep the car where he wants -it alien be wants to, - or -to- step- instantly from any. speed but a crawl—the fault of Nature rather than _ of inan in.the.shape of-a carsbuild,er. Not.until momentum is abolished shall we be able to do tliat, but Ithought We had got nearer to that point in crolution than we have ever been when I-those the Railtoct and-the new Lagonda. The - truth was, of course, that though the brakes in neither were revolutionary in action the general control of the ears was so good that I felt I could make them do anything I wanted.

That, I submit, is a factor of safety and their high acceleration contributed a great deal towards it.

Save in this most important quality there is small resem- blance between the two, no real basis of comparison. The Railton is a light car with all the special attributes of a high poWer.-to-weight ratio. Compared with the Lagonda it

SS sfnall cat, though in point of fact there is plenty of room

in it for four full-grown people. The Lagonda sveighS -some -,Owtr.saore, has a bigger engine and approximates more closely to the Continental, long-distancing towing carriage - of Nalieli a few are still built by distinguished firms in' this countrk and abroad. It has a four-speed gear-box, as against the Railton'a three-speed, and its maxima on third and top are a little higher than the Beaton's DII second rand top. -They - are totally different cars designed, I imagine, from totally different points of view. Both their designers are heartily to ix --congischilated on their striking Success. • The Ligon& iti, in-part, the first car To which Mr. W. O. Bent1ey4uts-been responsible since the lamented disappeafance ofihe original Bentley ea& -It was Wilt ii- its present form a year or two ago and distiaguished itself last by winning the Le Mans Coupe d'Endurance, the extremely strenuouS24-hOurs road race for genuine touring cars—an euent that was,vrOn fee

• .Great Britain three times in succession by Mr. Bentley's own creations, -also 4j-litre machines. The new car,. then, can boast of an exceptionally distinguished lineal descent.

It is a fine example of that sort of car in which high power is noiselessly allied to extreme docility-4till fairly rare. It can go-very fast- indeed, something like 100-miles an hotir on top, 80 on third,---and 60 on second, presumably near the practical limits for any car, today. The 6-cylinder engine has overhead valves," fwd ciirburettors, magneto ignition-and pump cooling. The bore and stroke are 88$ by 120,64, :the rated power being just over 29 and the-developed 140. It is a beauti- fully_,finished,job. ,_,The gear-box- is very-well synchromeshed between top ad third, and gbh* changes eau be ina,V without dniable-deoltdeking.- The only complaint 'I hail to Make was

that the changebeturen anctfirst iinta.zather -rough. Suspension is by long semi-elliptic springs, the flexibility of which is automatically eontrolled by surface conditions and also by hand. It is very good and, with the admirable steering, gives first-class road-holding. The bodywork is very hithly finished, and there is room for everybody and their belongings. The open car costs £1,000 and the saloon I tried £1,085.

The Rafftoa is a clever compound of English and Amerlinn design. The basis is the 8-cylinder Hudson, but much has been done to it by Mr. Railtori (who built the Napier-Railton racer) to make it conform to English needs, preserving the peculiar -advantages- of both American and English designs. It is very light, weighing only 216 cwt. with a good-sized saloon body. The bore and stroke are 76 by 114, the capacity just over 4 litres, the rated power 28.8 and the B.H.P. 113 at 3,800 revolutions. The valves are lateral. Interesting features are the oil pump which delivers off to both ends of the sump, the two coil ignition system, the very tidy "engine-room," with its neat wiring, and the 120 ampere-hour battery. The 3-speed gear-box has a S.! to 1 top and a 6.5 to 1 second. 'On

these the maxima are about 93 and '75 miles an hour. . The bodyworkof the one I tried, the 1568 four-door saloon, is comfortable and well-finished. There is plenty of elbow- room, but I thought the front seats too shalkiw for the king- legged. Both front wings are within the driver's vision Mid, in all respects, his seat is excellent. Steering_ and foot-brake are quite first-class, but the side-brake is, as is now practically universal, poor.

The performance of this car is quite out of the ordinary. Gear-ratio; power and weight have been so nicely calculated that it is almost, a one-gear car. Suppose _you to be of so insensitive a disposition, you could drive everywhere on top speed, except when you had to start away on a steep gradient. Al it happens we did climb a hill with a maximum gradient-of 1 inn, starting form 'where the slope is about 1 in 15, on top, brim a standstill, and the speed rose straight to 41 miles an hnur. In the open the slightest pressure on the pedal Will

d the needle up to 75 and more, and so far from feeling effort you imagine the ear has a 60-mile an hour gale behind it. I have never driven a more truly flexible petrol engine. In all eircumstanceS the engine runs almost inaudibly. Approach-

big as frigidly as possible, I should say that this is one of the most remarkable ears ever put into the hands of the

general public. slams Piummain INate.—Reed' requests for advice from our lifoloring Correspondent on the choice of sew cars should be accompanied by a stamped and addressed envelope. The highest price payabk -must be given, as serif as the type of body required No adoise can be given on the purchase, sale or exchange of used cars.]