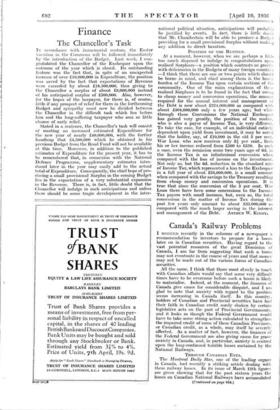 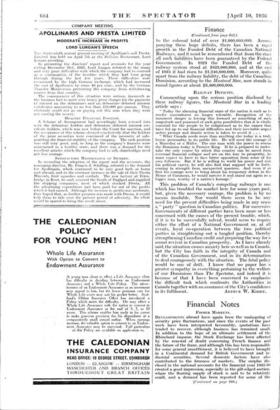 I NOTICED recently in the columns of a newspaper a recommendation to investors to prepare for a boom later on in Canadian securities. Having regard to the vast potential resources of the great Dominion of Canada, I am far from suggesting that such a boom may not eventuate in the course of years and that money may not be made out of the various forms of Canadian securities.

All the same, I think that those most cl3sely in touch with Canadian affairs would say that some very difficult times have to be overcome before such a boom is likely to materialise. Indeed, at the moment, the finances of Canada give cause for considerable disquiet, and I am glad to note that anxiety with regard to the position seems increasing in Canada itself. In this country, holders of Canadian and Provincial securities have had their faith in Canadian credit sorely shaken by certain legislative acts on the part of Provincial Governments, and it looks as though the Federal Government would have to take some strong action calculated to strengthen the impaired credit of some of these Canadian Provinces, or Canadian credit, as a whole, may itself be severely affected. As a matter of fact, however, the finances of the Federal Government are also giving cause for grave anxiety in Canada, and, in particular, anxiety is centred upon the long-continued terrible losses sustained by the National Railways.

The. Montreal Daily Star, one of the leading organs in Canada, had recently a striking article dealing with these railway losses. In its issue of March 12th figures are given showing that for the past sixteen years the losses on Canadian National Railways have accumulated (Continued on page 684.)

to the colossal total of over. $1,000,000,000: Accom- panying these huge deficits, there has been a rapid growth in the Funded Debt of the Canadian National Railways, and it must be remembered that from the start all such liabilities have been guaranteed by the Federal Government. In 1923 the Funded Debt of the railway system stood at $823,000,000, and at the end of 1934 it had risen to $1,246,000,000. Moreover, quite apart from the railway liability, the debt of the Canadian Dominion, according to the Montreal Star, now stands in round figures at about $3,400,000,000.

Commenting upon the 'serious position disclosed by these railway figures, the Montreal Star in a leading article says :

"Today the alarming financial state of the nation is such as to render concealment no longer tolerable. Recognition of the imminent danger is -forcing this forward as something of such magnitude and possessed of such grimpossibilities that it is vitally essential for the people to be enlightened as to the causes that have led up to our financial difficulties and their inevitable sequel unless prompt and drastic action is taken to avoid it . . .

"What Canada needs more than anything else today is a truly heroic personality in its public life. He will need the courage of a Mussolini or a Hitler. The one man with the power to rescue the 'Dominion today is Frothier King. If he is prepared to under- take the only course by which this country can be saved ,frorn eventual- financial collapse and set on the way to prosperity, he must expect to have to face bitter opposition from some of his own followers. But if he is willing to wield his power and risk his political career, he will also find that support will- be forth. comingin strength from unexpected quarters. And even if at first his courage were to bring about his temporary defeat in the House of Commons, he would survive it and stand out again as a bigger man, worthy of a nation's homage."

This problem of Canada's competing railways is one which has troubled the market here for some years past, but, given the necessary courage, the problem is by no means insoluble. Nor would there. seem to be any need for the present difficulties being made in any sense " party " question in Canadian politics. For successive Governments of different parties have .been more or less concerned with the causes of the present trouble, which, if it is to be successfully 'solved, would seem to require either the effort of a National Goyeinnient_ or, at all events, loyal co-operation between the two political parties in .straightening, out a tangled. position, thereby strengthening Canadian credit and preparing the way for a sound revival in Canadian prosperity. As I have already said, the situation causes anxiety here as well as in Canada, but the City has faith in the integrity of Canada and of the Canadian Government, and in its determination to deal courageously with the situation. The fatal policy would be one of Ch.M. I know that no paper has a greater sympathy in everything pertaining to the welfare of our Dominions than The Spectator, and indeed it is because of that I have been concerned to emphasise the difficult task which confronts the Authorities in Canada together with an assurance of the City's confidence