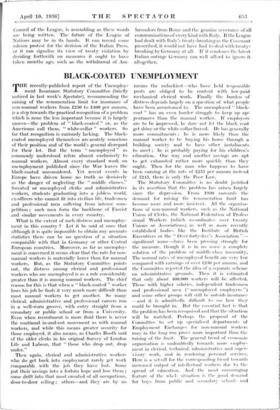 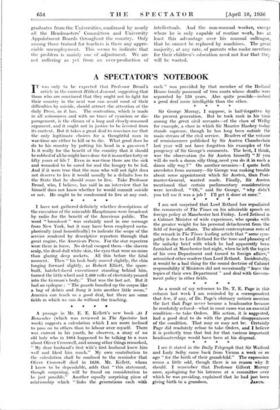 THE recently-published report of the Unemploy- ment Insurance Statutory Committee (briefly noticed in last week's Spectator), recommending the raising of the remuneration limit for insurance of non-manual workers from 2250 to £400 per annum, is a step towards the practical recognition of a problem which is none the less important because it is largely unseen—the problem of " black-coated " or, as the Americans call then', " white-collar " workers. So far that recognition is curiously lacking. The black- coated unemployed themselves are acutely conscious of their position and of the world's general disregard for • their lot. But the term " unemployed " as commonly understood refers almost exclusively to manual workers. Almost every standard work on unemployment published since the War leaves the black--coated unconsidered. Yet recent events in Europe have driven home no truth so decisively as the danger of neglecting the "middle classes." Sweated *or unemployed clerks and administrative workers, Students graduating into a jobless world, ex-officers- Who cannot fit into civilian life, tradesmen and professional men suffering from intense com- petition; such Men form the backbone of Fascist and similar movements in every country.: What is the extent of such distress and unemploy- ment in this country ? Let it be said at once that althoUgh it is quite impossible to obtain. any accurate statistics - there can be rio' question of a situation comp- arable with that in Germany or other Central European countries. Moreover, as far as unemploy- ment is concerned it seems clear that the rate for non- manual workers is materially lower than for manual workers. But, as the Statutory Committee points out, the'distress among clerical and professional workers who are unemployed is as a rule considerably greater than it is among manual workers. The chief reason for this is that when a "black-coated " worker loses hi'S job he finds it very much more difficult than most manual workers to get another. So many clerical, administrative and professional careers run in a well-11;0m groove, with entry straight from a secondary Or public school or from a University. Even When recruitment is more fluid there is never the continual in-and-out movement as with manual workers, and while this means greater security for those employed, it also means, as Charles Booth said of the Older 'clerks in his original Survey of London Life and- Labour, that "those who drop out, drop under." ' Then again,' clerical and administrative Workers who' do' get back into employment rarely get work comparable with the job they have lost.' Some put their. savings into a forlorn hope and lose them ; some drift into that most sweated of all occupations, dotor-to-door selling ; others—and they are by no means the unluckiest—who have held responsible posts are obliged to be content with low-paid mechanical clerical work. Finally the burden Of distress depends largely on a question of what people have been accustomed to. The unemployed " black- coat " has an even harder struggle to keep up ap- pearances than the manual worker. If employers are to be impressed, he dare not let the black coat get shiny or the white collar frayed. Ile has generally more commitments ; he is more likely than the manual worker to be buying his home through a building society and to have other instalments to meet ; he is probably paying for his children's education. One way and another savings arc apt to get exhausted rather more quickly than they ought. Then for the man who happens to have been -earning at the rate of £255 per annum instead of £245, there is only the Poor Law.

The Statutory Committee is no doubt justified in its assertion that the problem has arisen largely since the depression. From 1930 onwards the demand for raising the remuneration limit has become more and more insistent. All the organisa- tions of non-manual workers, such as the National Union of Clerks, the National Federation of Profes- sional Workers (which co-ordinates over twenty Unions or Associations), as well as more recently established bodies like the Institute of British Executives or the "Over-forty-five's Association "- significant namc—have been praising strongly for the measure, though it is in no sense a complete solution of the problem of middle-class insecurity: The normal rates of unemployed benefit arc very low compared with earnings of over £250 per annum, and the Committee rejected the idea of a separate scheme on administrative grounds. Then it is estimated that only about 400,000 workers will be affected. Those with higher salaries, independent tradesmen and professional men (" unemployed employers ") and some other groups will still be outside insurance —and it is admittedly difficult to sec how they could be brought in. But the essential fact is that the problem has been recognised and that the situation will be watched. Perhaps the proposal of the Committee to set up specialised departments of Employment Exchanges for non-manual workers may in the long run prove more important than the raising of the limit. The general trend of economic organisation is undoubtedly towards more employ- ment in clerical, technical, administrative and super- visorY work, and in rendering personal services. Here is a set-off for the corresponding trend towards increased output of intellectual workers due to the spread of education. And the most encouraging feature of the win h situation is the good demand for boys from public and secondary schools and graduates from the Universities, confirmed by nearly all the Headmasters' Committees_ and University Appointment Boards throughout the country. Only among those trained for teachers is there any- appre- ciable unemployment. This seems to indicate that the problem is mainly one of adjustment. We are not suffering as yet from an over-production of intellectuals. And the non-manual worker, except where he is only capable Of routine work; has at least this advantage over his manual colleague, that he cannot be replaced by machines. The great majority, at any rate, of parents who make sacrifices for their children's education need not fear that they will be wasted.