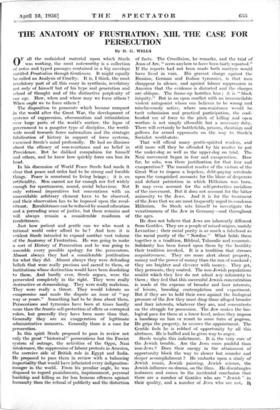 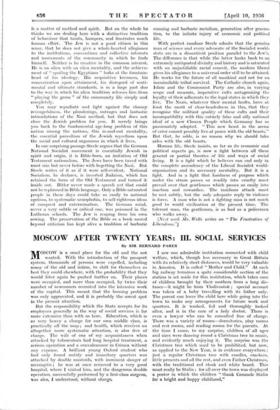 Page 7, 10 April 1936 — THE ANATOMY OF FRUSTRATION: XIII. THE CASE FOR PERSECUTION
Close

THE ANATOMY OF FRUSTRATION: XIII. THE CASE FOR PERSECUTION

By B. G. WELLS OF all the unfinished material upon which Steele was working, the most noteworthy is a collection of notes and typed passages contained in a big envelope entitled Frustration through Gentleness. It might equally be called an Analysis of Cruelty. It is, I think, the most revelatory part of all this essay in synthesis, revelatory not only of himself but of his type and generation and school of thought and of the distinctive perplexity of our age. How, when and where may we force others ? When ought we to force others ?

The disposition to persecute which became rampant in the world after the Great War, the development of systems of suppression, obscurantism and intimidation over large parts of the world's surface, the lapse of government to a gangster type of discipline, the world- wide recoil towards fierce nationalism and the strategic falsification of history in support of force systems, exercised Steele's mind profoundly. He had no illusions about the efficacy of non-resistance and no belief in Providence. But he disliked compulsion for himself and others, and he knew how quickly force can lose its head.

In his discussion of World Peace Steele had made it clear that peace and order had to be strong and forcible things. Peace is unnatural to living beings ; it is an artificiality. Men cannot see far enough nor feel widely enough for spontaneous, sound, social behaviour. Not only rational imperatives but conventions with an unavoidable. arbitrary element have to be observed, and their observation has to be imposed upon the recal- citrant: Recalcitrance can be reduced by sound education and a• pervading sense of justice, but there remains and will always remain a considerable residuum of recalcitrance.

Just how• patient and gentle can we who want a rational world order afford to be ? And here it is evident Steele intended to expand another vast volume of the Anatomy of Frustration. He was going to make a sort of History of Persecution and he was going to assemble every possible apology for the persecutors. Almost always they had a considerable justification for whet they did. Almost always they were defending beliefs that were really precious and sacred to them, or institutions whose destruction would have been desolating to them. And hardly ever, Steele argues, were the persecuted completely in the right. They were really destructive or demoralising. They were really malicious. They were really a threat. They would tolerate no compromise awl made the dispute an issue of "my way or yours." Something had to be done about them. Persecutions and tyrannies have been at times hardly more than the frantic self-protection of effete or corrupted rulers, but generally they have been more than that. Generally they are an exaggeration of legitimate administrative measures. Generally there is a case for persecution.

In this spirit Steele proposed to pass in review not only the great "historical" persecutions but the Fascist system of outrage, the activities of the Ogpu, Nazi intolerance, the suppression of labour protests in America, the coercive side of British rule in Egypt and India. He proposed to pass them in review with a balancing impartiality that would have infuriated every indignation- monger in the world. From his peculiar angle, he was disposed to regard punishments, imprisonment, personal hardship and killing as far less heinous offences against humanity than the refusal of publicity and the-distortion of facts. The Crucifixion, he remarks, and the trial of Joan of Arc, "seem anyhow to have been fairly reported." If the reports had not been made both martyrs would have lived in vain. His gravest charge against the Russian, German and Italian tyrannies, is that men disappear in silence, and against labour suppression in America that the evidence is distorted and the charges are oblique. The frame-up horrifies him ; it is "black iniquity." But in an open conflict with an irreconcilable violent antagonist whom one believes to be wrong and mischievously active, where non-resistance would be tacit submission and practical participation, the cool- headed use of force to the pitch of killing and open warfare is not simply allowable but a necessary duty. There will certainly be battlefields, prisons, shootings and gallows for armed opponents on the way to Steele's Socialist world-state.

That will offend many gentle-spirited readers, and still more will they be offended by his resolve to put the under-dog as well as the upper-dog on trial. The Nazi movement began in fear and exasperation. How far, he asks, was there justification for that fear and exasperation? The manifest resolve of the victors of the Great War to impose a hopeless, debt-paying servitude upon the vanquished accounts for the blaze of desperate and defiant patriotism in which Ilitlerism was born. It may even account for the self-protective racialism of the movement. But it does not account for the bitter animosity to the Jews. And it is for the treatment of the Jews that we are most frequently urged to condemn Hitlerism. So Steele sets himself to investigate the vexatiousness of the Jew in Germany—and throughout the ages.

He does not believe that Jews are inherently different from Gentiles. They are a people of mixed origins, mainly Levantine ; their racial purity is as much a falsehood as the racial purity of the "Nordics." What holds them together is a tradition, Biblical, Talmudic and economic. Solidarity has been forced upon them by the hostility their tradition invoked. It is a tradition that stresses acquisitiveness. They are more alert about property, money and the power of money than the run of mankind ; they are brighter and cleverer with money. They get, they permeate, they control. The non-Jewish populations amidst which they live do not admit any inferiority to them ; they feel that this successful Jewish concentration is made at the expense of broader and finer interests, of leisure, brooding contemplation and experiment. But if they are to hold their own against the biological pressure of the Jew they must drop these alleged broader and finer interests, whatever they are, and concentrate on the struggle for possession. The Jew makes the bio- logical pace for them at a lower level, unless they impose a handicap on him or resort to some form of pogrom. He grips the property, he secures the appointment. The Gentile feels he is robbed of opportunity by all this alertness. He is baffled and he gives way to anger.

Steele weighs this indictment. It is the very core of the Jewish trouble. Arc the Jews more pushful than non-Jews ? Does their energy in the attainment of opportunity block the way to slower but sounder and deeper accomplishment ? He embarks upon a study of Jewish music, Jewish painting, Jewish science, the Jewish influence on drama, on the films. Ile disentangles instances and comes to the incidental conclusion that there are a number of Gentiles who are " Jewish " in their quality, and a number of Jews who arc not, is a matter of method and spirit. But on the whole he thinks we are dealing here with a distinctive tradition of behaviour that taints, hampers, and frustrates much human effort. The Jew is not a good citizen in this sense, that he does not give a whole-hearted allegiance to the institutions, conventions and collective interests and movements of the community in which he finds himself. Neither is he creative in the common interest. He is an alien with an alien mentality, and the achieve- ment of " spoiling the Egyptians " lurks at the fountain- head of his ideology. His acquisitive keenness, his concentration upon attainment, his disregard of senti- mental and ultimate standards, is in a large part due to the way in which his alien tradition releases him from "playing the game" of the community life simply and completely.

You may repudiate and fight against the clumsy revengefulness, the plunderings, outrages and fantastic intimidations of the Nazi method, but that does not close the Jewish problem for you. It merely brings you back to the fundamental age-long problem of this nation among the nations, this in-and-out mentality, the essential parasitism of the Jewish mycelium upon the social and cultural organisms in which it lives.

In one surprising passage Steele argues that the German National Socialist movement is essentially Jewish in spirit and origin, it is Bible-born, an imitation of Old Testament nationalism. The Jews have been taxed with most sins but never before with begetting the Nazi. But Steele writes of it as if it were self-evident. National Socialism, he declares, is inverted Judaism, which has retained the form of the Old Testament and turned it inside out. Hitler never made a speech yet that could not be rephrased in Bible language. Only a Bible-saturated people in these days could take so easily to national egotism, to systematic xenophobia, to self-righteous ideas of conquest and extermination. The German mind, never a very subtle or critical one, was poisoned in the Lutheran schools. The Jew is reaping from his own sowing. The preservation of the Bible as a book sacred beyond criticism has kept alive a tradition of barbaric cunning and barbaric racialism,. generation after genera- tion, to the infinite injury of economic and political life.

With perfect candour Steele admits that the genuine man of science and every advocate of the Socialist world.

state are in a dissentient position parallel to the Jew's.

The difference is that while the latter harks back to an extremely antiquated divinity and history and is saturated with an unjustifiable racial conceit, the modern liberal -gives his allegiance to a universal order still to be attained. He works for the future of all mankind and not for an inassimilable tribal survival. The Catholic church again, Islam and the Communist Party are also, in varying scope and measure, imperative cults antagonising the loyalty of their adherents to the legal states in which they live. The Nazis, whatever their mental faults, have at least the merit of -clear-headedness in this, that they recognise the militant quality of these cults and their incompatibility. with this entirely false and silly national ideal of a new Chosen People which Germany has so passionately adopted. "This new beast in the arena of error cannot possibly live at peace with the old beasts." But that, he adds, is no reason why we- should take sides with the old beasts.

Human life, Steele insists, so far as its economic and political aspects go, is now a fight between all these general or partial theories of life and ways of social living. It is a fight which he believes can end only in the complete ascendency of the Liberal. Socialist world- organisation and its necessary mentality. But it is a fight. And in a fight that hardness of purpose which under the strain passes so readily into cruelty must prevail over that gentleness which passes so easily into inaction and cowardice. The insidious attack must be met subtly, but the only adequate reply to Violence is force. A man who is not a fighting man is hot much good to world civilisation at the present time. The tolerant man, the gentleman, is as bad as a liceman who walks away.

[Next week Mr. IVells writes on " The Frustration of Liberalism.")