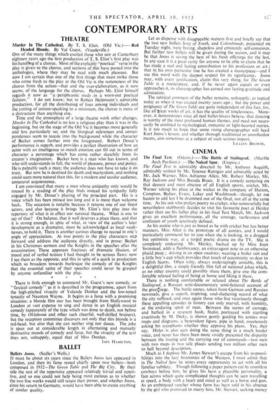 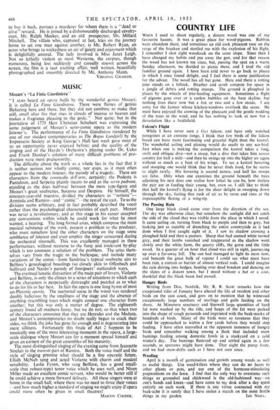 The Final Test. (Odeon.)—The Battle of Stalingrad. (Marble Arch Pavilion.)—The Naked Spur. (Empire.) The Final Test is admirably directed by Mr. Anthony Asquith, admirably written by Mr. Terence Rattigan and admirably acted by Mr. Jack Warner, Miss Adrianne Allen, Mr. Robert Morley, Mr. Ray Jackson and Miss Brenda Bruce. It is a comedy centering on that dearest and most obscure of all English sports, cricket, Mr. Warner taking his place at the wicket in the company of Hutton, Compton, Bedser, Evans, Laker and Washbrook—though, let me hasten to add lest I be drummed out of the Oval, not all at the same time. As his son who prefers poetry to cricket, who remorsefully but nevertheless stubbornly decides to visit his favourite poet at Henley rather than see his father play in his final Test Match, Mr. Jackson gives an excellent performance, all the courage, tactlessness and confusion of youth sensitively defined.

As his auntie who is just as bored as he with cricket but has better manners, Miss Allen is the prototype of all aunties, and I would 'particularly commend her to you when she is looking, in a drugged but optimistic way, at a turgid poetic drama on the TV. She is completely endearing. Mr. Morley, backed up by Miss Joan Swinstead, adds a flamboyancy, an extravagant note to an otherwise placid piece ; driving in an open roadster, wearing a boiler suit and a little boy's cap which provides that touch of eccentricity so dear to English hearts. Often witty, always undeviatingly amiable, this is a delightful film, a simple friendly film full of national jokes which, as no other country could possibly share them, give one the com- fortable relaxed feeling of being at home and liking it there.

There is nothing comfortable or relaxed about The Battle of Stalingrad, a Russian semi-documentary semi-fictional account of the greatjsiege. The battle scenes, taken from German and Russian newsreels, give a superb, inspiring, soul-shattering record of what the city suffered, and once again those who live vicariously through these appalling episodes in history can only marvel, with humility, at the enduring spirit of man. Between the scenes of carnage, and bathed in a reverent hush, Stalin, portrayed with startling exactitude by M. Dieky, is shown gently guiding his armies over maps and diagrams, a benevolent figure, pipe in hand, courteously asking his sycophants whether they approve his plans. Yes, they say. Hitler is also seen doing the same thing in a much louder voice, and never has there been more vividly presented the disparity between the issuing and the carrying out of commands—two men with two maps in two safe places sending two million other men to hell beyond description.

Much as I deplore Mr. James Stewart's escape from his responsi- bilities into the lazy histrionics of the Western, I must admit that in The Naked Spur he seizes every opportunity to act with all his familiar subtlety. Though following a paper pattern cut by countless cowboys before him, he gives his hero a plausible personality, a face across which quite complicated thoughts can be seen travelling at speed, a body with a heart and mind as well as a horse and gun. As an embittered rancher whose farm has been sold in his absence by the girl who promised to marry him, Mr. Stewart, seeking money to buy it back, pursues a murderer for whom there is a "dead or alive" reward. He is joined by a dishonourably discharged cavalry- man, Mr. Ralph Meeker, and an old prospector, Mr. Millard Mitchell. The villain who, captured at last, tries on the journey home to set one man against another, is Mr. Robert Ryan, an actor who brings to wickedness an air of gaiety and enjoyment which is delightfully amoral. The lady involved is Miss Janet Leigh. Not so lethally violent as most Westerns, the corpses, though numerous, being less recklessly and casually strewn across the screen, the film is a taut exciting affair, well written, beautifully photographed and smoothly directed by Mr. Anthony Mann.