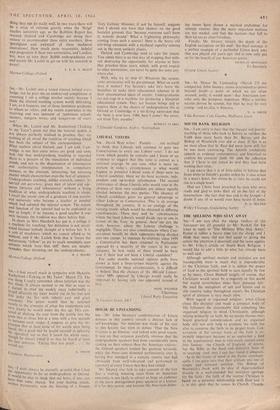 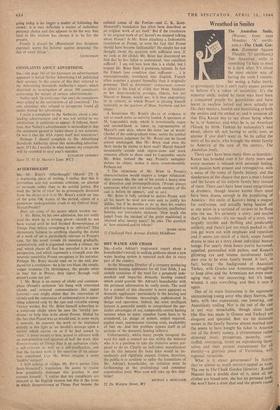 THE MILLIONS WHO STAY AWAY

am sure -that the clergy 'readers of the Spectator arc all- grateful to Mr. Reckitt for his letter in reply to -The Millions Who Stay Away.' Easter is rather a heavy time for the clergy and I think that many did not feel equal to -giving the

• article the attention it deserved; and the same applies to Mr. Utley's article on South • Bank Religion. I would like to add a little to what has already been so well said.

Although spiritual matters and statistics are not incompatible there • is much that is imponderable in the Christian faith, and it is within the power o! God in ahe spiritual field to save equally by few as by many. Christ Himself taught, of course, that Christians would never be 'a-majority in this world but would nevertheless make their presence felt: He used the metaphors of salt and 'leaven and in this country today throughout society the Christian spirit' of altruism is very 'much alive. With regard to organised religion: when Christ chose His disciples and made a compact body of His followers He presumably had something like organised religion in mind. Christianity, although relying primarily on faith, by no means throws over- board practical considerations and an organised body will not only help to promote the faith but also to conserve the faith in its proper form. Con- servation of the correct form of the • faith is ex- tremely important because in so uncharted a field as the supernatural. man is very easily carried away into fantasy : the Church of England. of course, has the Bible as the fixed and definitive basis of its teaching—and,. may 1 say, has found it adequate. As to the frame of 'mind el the Easter communi- cants, I am quite sure that their attitude was one of simple and reverent worship. The Bishop of Woolwich's hook with its idea of depersonalised divinity is a well-intended but mistaken apology for the faith : the faith of the normal Christian is based on a personal relationship with God and it is in this spirit that he conies to Church. Church-

going today is no loriger a matter of following the e crowd: it is very definitely a matter of individual personal choice and this appears to be the way that God in His wisdom has chosen it to be for the present. Finally it should be remembered that Scripture expressly warns the believer against despising 'the day of small things:, CHURCHMAN