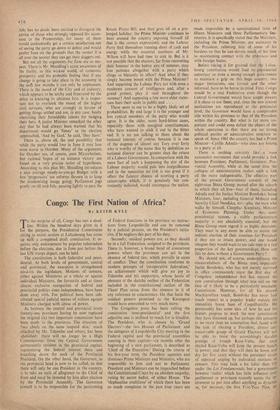 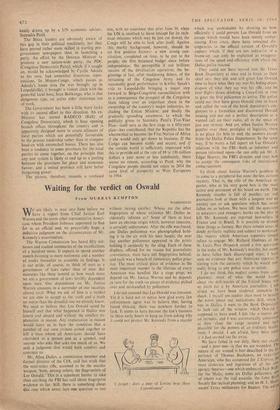 Congo: The First Nation of Africa?

By KEITH KYLE rro the surprise of all, Congo has met a dead- ' line. Within the hundred days given to it for the purpose, the Presidential Commission sitting in secret session at Luluabourg has come up with. a completed draft constitution. It re- quires only endorsement by popular referendum before the elections, due in June just before the last UN troops depart, can be held.

The constitution is both federalist and presi- dential. At both levels of government, central and provincial, the executive is strengthened vis-a-vis the legislature. Motions of censure, either against Ministries as a whole or against individual Ministers, the favourite and at times almost exclusive occupation of federal and provincial politics since independence, have been done away with. For political have been sub- stituted spetial judicial means of redress against Ministers charged with abuse of power.

As between the central and provincial levels (twenty-one provinces having by now replaced the original six) two important concessions have been made to the provinces. The situation of 'two chiefs on the same leopard skin,' much attacked by Mr. Tshombe and others, has been abolished : there will no longer be a High Commissioner from the Central Government permanently resident in the provincial capital, representing the federal interest there and breathing down the neck of the Provincial President. On the other hand, the Governor, as the provincial head is now to be called, so that there will only be one President in the country, is to take an oath of allegiance to the Chief of State and must be invested by him after election by the Provincial Assembly. The Governor himself is to be responsible for the performing of Federal functions in his province on instruc- tions from Leopoldville and can be removed by a judicial process, on the President's initia- tive, if he neglects this part of his duty.

Secondly, residual powers are, as they should be in a full Federation, assigned to the provinces. There is, however, a broad band of concurrent powers where the provinces can act in the absence of federal law, which prevails in cases of conflict. Thus the constitution conforms to modern precepts of 'co-operative federalism,' an achievement which will give no joy to Tshombe and his supporters, whose hoots of pleasure at the sketchy outline of the Federation included in the constitutional section of the Thant Plan arose from the absence in it of any reference to concurrency. On that basis the residual powers promised to the Katangese would have amounted to very much more.

The Congolese press has been calling the constitution `semi-presidential' and the first adjective one is inclined to reach for is Gaullist. The President, who is chosen by 'Grand Electors'—the two Houses of Parliament and the delegates of Leopoldville City meeting in the Federal capital and the provincial assemblies meeting in their capitals—six months after the beginning of a new parliament, is described as 'Chief of the Executive.' During the course of his five-year term, the President appoints and dismisses Prime Ministers and Ministers, who are responsible to him and not to Parliament. President and Ministers can be impeached before the Constitutional Court by an absolute majority, voting by secret ballot, of either House. The `elephantine coalitions' of which there has been so much complaint in the past four years are made impossible by a constitutional limit of fifteen Ministers and three Parliamentary Sec- retaries. It is specifically stated that the Ministers, including the Prime Minister, are assistants to the President, relieving him of some of his burdens so that he can devote much of his time to maintaining contact with the provinces and with foreign States.

Before taking it for granted that the I Attila- bourg constitution would lead to presidential autocracy or even a strong enough government to maintain a grip on this huge country, two major limitations, one formal and the other informal, have to be borne in mind. First, Congo would be 'a real Federation even though the Central Government would have ample powers if it chose to use them; and, since the new central institutions are reproduced at the provincial level, the Governor would have a comparable role within his province to that of the President within the country. But what is far more im- portant and could even defeat the object of the whole operation is that there are no strong political parties or administrative structure to speak of. Since 1961 the country has had a Primo Minister--Cyrille Adoula--who does not belong to a party at all.

There is nothing remotely like a mass nationalist movement that could provide a link between President, Parliament, Governor, Pro- vincial Assembly, while at the same time the collapse of administration makes such a link all the more indispensable. The effective part of the present Government consists of the eight-man Binza Group, named after the suburb in which they all live—four of them, including Adoula and the Justice Minister Bomboko, being Ministers, four, including General Mobutu and Security Chief Nendaka, not—plus the man who walks by himself, Cleophas Kamitatu, Minister of Economic Planning. Under the,• semi- presidential system, a stable parliamentary majority is not absolutely essential, but the Binza Group must regard it as highly desirable. They must in any event be able to secure the indirect election of their nominee for President if they are to retain power, and one would imagine they would want to see safe men in a fair proportion of the key governorships. How can this be done without a Government Party?

We should not, of course, underestimate the 'resourcefulness of the Binza men, especially Justin Bomboko, who has not merely survived in office continuously since the first day of Congolese independence but has steered the

• new constitution through what was not on the face of it likely to be a particularly amenable Commission. However, for all his shrewd Machiavellian touch, Bomboko has never had much impact as a popular leader outside his immediate home base of Coquilhatville. He presumably has some idea of how he and his friends propose to work the new constitution they have dreamed up, but perhaps this amounts to no more than an assumption that, faced with the task of electing a President, almost any conceivable group of Grand Electors will not be able to resist the astonishingly durable prestige of Joseph Kasa-Vubu, that once elected Kasa-Vubu will keep the present bunch in power, and that they will then be home and dry for five years without the persistent strain of repeated sniping by individual motions of censure. This may look a lot tidier than life under the Loi Fondamentale, but a government however 'stable' which has little influence over parliament or prdvinces scarcely seems the in' strument to put into effect anything as dynamic as, for instance, the first Five-Year Plan, re-

cently drawn up by a UN economic adviser, Suzendra Patel.

The Binza leaders are obviously aware of this gap in their political machinery, but they have proved rather more skilled in starting pro- government newspapers than in launching a party. An effort by the Defence Minister to promote a new nation-wide party, the PDC (Congolese Democratic Party), which, if it caught on, would be acknowledged by Cyrille Adoula as his own, had somewhat disastrous reper- cussions. In Moyen-Congo, which passes as Adoula's home area (he was brought up in Leopoldville), it brought a violent clash with the powerful local boss, Jean Bolikango, who is that dangerous type, an active elder statesman out of work.

The,Government has been a little more lucky with its second effort in this direction. An ex- Minister has started RADECO (Rally of Congolese Democrats), which is busy opening branch offices throughout the country and is apparently designed more to create alliances of local parties which are potentially favourable to the present leadership rather than to compete head-on with entrenched bosses. There has also been a tendency in some provinces for the local parties to come together, on the principle that any new system is likely to end up as a jostling between the provinces for place and economic favour, and a united province will have better bargaining power.

The picture, therefore, remains a confused

one, with no assurance that after June 30, when the UN is resolved to leave (except for its tech- nical missions which may be just cut down), the Congo will be able to look after itself. Against this murky background, however, should be set five positive factors: a new strong con- stitution, completed on time, to be put to the people; the first balanced budget since before independence; the perceptible if not brilliant success of the devaluation operation; the be- ginnings at last, after maddening delays, of the retraining of the Congolese Army and its reasonably good performance in Kwilu; Spaak's visit to Leopoldville bringing a major step forward in Belgo-Congolese reconciliation with as a consequence the prospect of the Congolese State taking over an important share in the ownership of the country's major industries, in- cluding the Union Miniere; and finally the gradually spreading awareness, to which the publicity given to Suzendra Patel's Five-Year Plan—itself seen as the first stage in a fifty-year plan—has contributed, that the Republic has the wherewithal to become the First Nation of Africa if she would only get down to business. If the Congo can become stable and secure, and if the outside world is sufficiently impressed with this to provide aid at the rate of 88 to 130 million dollars a year more or less indefinitely, there seems no reason, according to Patel, why the Congolese people should not enjoy in 2014 the same level of prosperity as West Europeans in 1964.