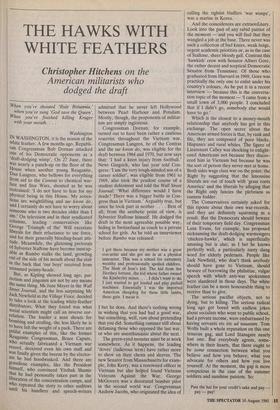 THE HAWKS WITH WHITE FEATHERS

Christopher Hitchens on the

American militarists who dodged the draft

When you've shouted Rule Britannia,' when you've sung 'God save the Queen', When you've finished killing Kruger with your mouth. . .

Washington IN WASHINGTON, it is the season of the white feather. A few months ago, Republi- can Congressman Bob Dornan attacked one of his Democratic opponents as a `draft-dodging wimp'. On 27 June, there was nearly a punch-up on the floor of the House when another young Reaganite, Dan Lungren, who bellows for everything from aid to the Contras to chemical war- fare and Star Wars, shouted as he was restrained: 'I do not have to fear for my physical being in this House. My avoca- tions are weightlifting and tae kwon do, and I certainly do not have to worry about someone who is two decades older than I am.' On television and in their syndicated columns, leading conservatives like George 'Triumph of the' Will excoriate liberals for their reluctance to use force, and for their generally bleeding-heart atti- tude. Meanwhile, the glistening pectorals of Sylvester Stallone have become inescap- able as Rambo stalks the land, growling out of the side of his mouth about the stab in the back that 'our boys' received from unnamed pointy-heads. But, as Kipling showed long ago, pat- riotism and jingoism are not by any means the same thing. Ms Jane Mayer in the Wall Street Journal, and the less surprising Mr Jack Newfield in the Village Voice, decided to take a look at the leading white-feather distributors. What they found was what social scientists might call an inverse cor- relation. The louder a man shouts for bombing and strafing, the less likely he is to have felt the weight of a pack. There are pitiful examples of this, like the former Reaganite Congressman, Bruce Capute, who actually fabricated a Vietnam war record, deceived even his own staff and was finally given the breeze by the elector- ate he had hoodwinked. And there are grandiose examples, like the President himself, who convinced Yitzhak Shamir that he had personally taken part in the liberation of the concentration camps, and who repeated the story to other auditors until his handlers and speech-writers

admitted that he never left Hollywood between Pearl Harbour and Potsdam. Mostly, though, the proponents of militar- ism are simply inglorious.

Congressman Dornan, for example, turned out to have been rather a cautious reservist throughout the Vietnam war. Congressman Lungren, he of the Contras and the tae kwon do, was eligible for the draft between 1964 and 1970, but now says that: 'I had a keen injury from football.' Newt Gingrich, who last year told Con- gress: am the very tough-minded son of a career soldier', was eligible from 1961 to 1969, also took the prudent course of a student deferment and told the Wall Street Journal: 'What difference would I have made? There was a bigger battle in Con- gress than in Vietnam.' Arguably true, but since he took part in neither . . . . Best of all, from the aesthetic point of view, is Sylvester Stallone himself. He dodged the draft in the most agreeable possible way, hiding in Switzerland as coach to a private school for girls. As he told an interviewer before Rambo was released:

I got there because my mother was a great con-artist and she got me in as a physical instructor. This was a school for extremely wealthy and professionally spoiled children. The Shah of Iran's kid. The kid from the Hershey fortune, the kid whose father owned the Kimberley mines. . . . I didn't want to ski. I just wanted to get loaded and play pinball machines. Essentially I was the imported American sheepdog for these little lambs, these girls. I mean it.

I bet he does. And there's nothing wrong in wishing that you had had a good war, but something, well, rum about pretending that you did. Something rummer still about defaming those who opposed the last war, or who are unenthusiastic about the next.

The green-eyed monster must be at work somewhere. As it happens, the leading `doves' (ludicrous term) have rather more to show on their chests and sleeves. The new Senator from Massachusetts for exam- ple, John Kerry, was a renowned officer in Vietnam but also helped found Vietnam Veterans Against the War. George McGovern was a decorated bomber pilot in the second world war. Congressman Andrew Jacobs, who originated the idea of calling the rightist bluffers 'war wimps', was a marine in Korea.

And the coincidences are extraordinary. Look into the past of any rabid patriot of the moment — and you will find that they wangled a job at the base. There never was such a collection of bad knees, weak lungs, urgent academic priorities or, as in the case of Stallone, sheer bloody gall. Contrast this `hawkish' crew with Senator Albert Gore, the rather decent and sceptical Democratic Senator from Tennessee. Of those who graduated from Harvard in 1969, Gore was practically the only one to enlist under his country's colours. As he put it in a recent interview — because this is the conversa- tion topic of the moment — 'I came from a small town of 3,000 people. I concluded that if I didn't go, somebody else would have to go.'

Which is the closest to a money-mouth relationship that anybody has got in this exchange. The open secret about the American armed forces is that, by rank and file, they are composed of poor blacks, Hispanics and rural whites. The figure of Lieutenant Calley was shocking to enlight- ened Americans not because they discov- ered him in Vietnam but because he was the sort of person they never met at home. Both sides wage class war on the point; the Right by suggesting that the limousine liberals are out of touch with 'grass roots America' and the liberals by alleging that the Right only fancies the plebeians as cannon fodder.

The Conservatives certainly asked for this riposte about their own war-records, and they are definitely squirming as a result. But the Democrats should beware of their temporary field day. Congressman Lane Evans, for example, has proposed nicknaming the draft-dodging warmongers `chicken-hawks', which is superficially amusing but is also, as I bet he knows perfectly well, a particularly nasty slang word for elderly pederasts. People like Jack Newfield, who don't think anybody

should have gone to Vietnam, should beware of borrowing the philistine, vulgar speech with which anti-war spokesmen were slandered in those days. The white feather can be a more honourable thing to receive than to give.

The serious pacifist objects, not to dying, but to killing. The serious radical long ago got bored with endless jokes

about socialists who went to public school, had a private income, were embarrassed by having servants etc etc ad nauseam. Tom Wolfe built a whole reputation on this one

tenuous gag, and Lord Stansgate nearly lost one. But everybody agrees, some- where in their hearts, that there ought to

be some connection between what you

believe and how you behave; what you advocate for others and how you live yourself. At the moment, the gap is more conspicious in the case of the summer soldiers and sunshine patriots. So:

Pass the hat for your credit's sake and pay pay — pay!