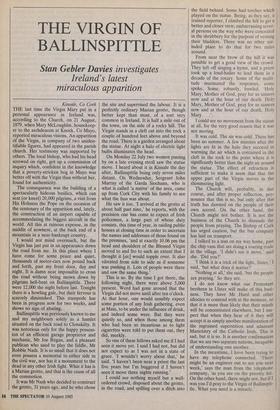 Kinsale, Co Cork THE last time the Virgin Mary put in a personal appearance in Ireland was, according to the Church, on 21 August, 1879, when Mary McLoughlin, housekeep- er to the archdeacon at Knock, Co Mayo, reported miraculous visions. An apparition of the Virgin, in company of two uniden- tifiable figures, had appeared in the parish church. Her testimony was supported by others. The local bishop, who had his head screwed on right, got up a commission of inquiry which, confident in the knowledge that a poverty-stricken bog in Mayo was better off with the Virgin than without her, found for authenticity.

The consequence was the building of a spectacularly hideous basilica, which can seat (or kneel) 20,000 pilgrims, a visit from His Holiness the Pope on the occasion of the centenary of the apparition and, lately, the construction of an airport capable of accommodating the biggest aircraft in the world. All this at ruinous expense, in the middle of nowhere, at the back end of a mountain in a near-bankrupt country.

I would not mind overmuch, but the Virgin has just put in an appearance down the road from me. In this place where I have come for some peace and quiet, thousands of motor-cars now pound back and forth, past my front door, day and night. It is damn near impossible to cross the road without being mown down by pilgrims hell-bent on Ballinspittle. There were 12,000 the night before last. Tonight there is a howling gale, but their fervour is scarcely diminished. This stampede has been in progress now for two weeks, and shows no sign of abating.

Ballinspittle was previously known to me and my neighbours solely as a hamlet situated on the back road to Clonakilty. It was notorious only for the happy possess- ion of an efficient garage proprietor and mechanic, Mr Joe Regan, and a pleasant publican who used to play the fiddle, Mr Robbie Nash. It is so small that it does not even possess a memorial to either side in the civil war, nor has it a monument to the dead in any other Irish fight. What it has is a Marian grotto, and that is the cause of all the commotion.

It was Mr Nash who decided to construct the grotto, 31 years ago, and he who chose the site and supervised the labour. It is a perfectly ordinary Marian grotto, though better kept than most, of a sort very common in Ireland, It is half a mile out of the town, on the side of a rocky hill. The Virgin stands in a cleft cut into the rock a couple of hundred feet above and beyond the road. There is a garden arranged about the statue. At night a halo of electric light bulbs illuminates the head.

On Monday 22 July two women passing by on a late evening stroll saw the statue move. I heard about it in Kinsale the day after, Ballinspittle being only seven miles distant. On Wednesday, Sergeant John Murray of the Garda Siochana, who is what is called 'a native' of the area, came up from Cork City with his family to see what the fuss was about.

He saw it too. 'I arrived at the grotto at about half past nine,' he reports, with the precision one has come to expect of Irish policemen, a large part of whose duty consists, this time of year, in raiding public houses at closing time in order to ascertain the names and addresses of those found on the premises, 'and at exactly 10.06 pm the head and shoulders of the Blessed Virgin moved to and fro to such an extent that I thought it [sic] would topple over. It also vibrated from side to side as if someone was pushing it. Lots of people were there and saw the same thing.'

This is so. By the time I got there, the following night, there were above 5,000 present. Word had gone around that the Virgin did not move until after ten o'clock. At that hour, one would sensibly expect some portion of any Irish gathering, even at Mass, to be under the influence of drink, and indeed some were. But they were quietly so, and when those among them who had been so incautious as to light cigarettes were told to put them out, they did, meekly.

So one of these fellows asked me if I had seen it move yet. I said I had not, but did not expect to as I was not in a state of grace. 'I wouldn't worry about that,' he said. 'I haven't been near a priest the last five years but I'm buggered if I haven't seen it move three nights running.'

I could see nothing myself but a well- ordered crowd, disposed about the grotto, in the road, and spilling over a ditch into the field behind. Some had torches which played on the statue. Being, as they say, a trained reporter, I climbed the hill to get a better and closer view, embarrassing sever- al persons on the way who were concealed in the shrubbery for the purpose of venting their bladders. There was no other sec- luded place to do that for two miles around.

I could see no movement from the statue at all, for the very good reason that it was not moving.

It was cold. The air was cold. There has been no summer. A few minutes after the lights are lit in the halo they succeed in warming the air which is contained in the cleft in the rock to the point where it is significantly hotter than the night air around the statue. The effect of refraction is sufficient to make it seem that that the upper part of the Virgin moves in the shimmering light.

The Church will, probably, in due course, and after proper reflection, pro- nounce that this is so, but only after this truth has dawned on the people of their own accord. On the other hand, the Church might not bother. It is not the business of the Church to dissuade the people from praying. The Bishop of Cork has urged caution, but the bus company has laid on transport.

I talked to a nun on my way home, past the chip vans that are doing a roaring trade in the village. 'I didn't see it move,' said she. 'Did you?'

'I think it is a trick of the light, Sister,' I said, 'but what does it matter?'

'Nothing at all,' she said, 'but the people are praying.' So they are.

I do not know what our Protestant brethren in Ulster will make of this busi- ness. They have Mr Hurd and other idiocies to contend with at the moment, so that it is more than likely that their minds will be concentrated elsewhere, but I sus- pect that when they hear of it they will accept it as simply another manifestation of the ingrained superstition and adamant Mariolatry of the Catholic Irish. This is sad, but it is so. It is another confirmation that we are two separate nations, incapable of understanding one another.

In the meantime, I have been trying to have my telephone connected. 'There might be an engineer out to see you next week,' says the man from the telephone company, 'as you are on the priority list. On the other hand, there might not, but if I was you I'd pray to the Virgin of Ballinspit- tle. What you need is a miracle.'