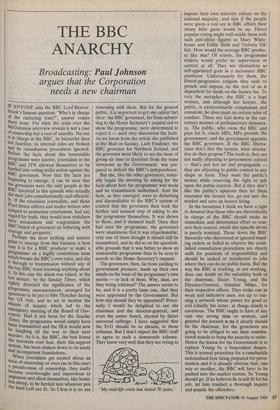 argues that the Corporation needs a new chairman

IF ANYONE asks the BBC Lord Beaver- brook's famous question: 'Who's in charge of the clattering train?', answer comes there none. For what the crisis over the McGuinness interview reveals is not a case of censorship but a case of anarchy. No one is in charge at the BBC, its hierarchy does not function, its internal rules are broken and its consultation procedures ignored. Before the facts about this lamentable programme were known, journalists at the BBC and ITN allowed themselves to be hustled into voting strike action against the BBC governors. Now that the facts are beginning to emerge, it can be seen that the governors were the only people at the BBC involved in this episode who actually did their jobs constitutionally and efficient- ly. If the television journalists, and those Fleet Street editors and leader-writers who Jumped to premature conclusions, had any regard for truth, they would now withdraw their accusations and congratulate the BBC board of governors on behaving with courage and propriety. Perhaps the most striking and sinister Point to emerge from this business is how easy it is for a BBC producer to make. a Programme on a highly contentious issue which breaks the BBC's own rules, and slip it through to transmission without any of the top BBC brass knowing anything about it. In this case the alarm was raised, at the last minute, by the Sunday Times, which rightly detected the significance of the programme announcement, arranged for questions to be put to Mrs Thatcher during her US visit, and so set in motion the wheels of inquiry which led to the emergency meeting of the Board of Gov- ernors. Had it not been for the Sunday Times, the programme would simply have been transmitted and the IRA would now be laughing all the way to their next murder. As it is, the BBC, the best friend the terrorists ever had, their life-support system, has been shaken down to its seedy and incompetent foundations. When journalists get excited about an issue of censorship or even (as in this case) a pseudo-issue of censorship, they easily become overwrought and impervious to argument and allow themselves, like brain- less sheep, to be herded into whatever pen the hard Left see fit. So I fear it is no use reasoning with them. But for the general public, it is important to get one salient fact clear: the BBC governors, far from submit- ting to the Home Secretary's request not to show the programme, were determined to reject it — until they discovered the facts: As we know from the article she published in the Mail on Sunday, Lady Faulkner, the BBC governor for Northern Ireland, and the governor most likely to see the issue of giving air time to terrorists from the same viewpoint as the Government, was pre- pared to defend the BBC's independence.

But she, like the other governors, natur- ally began the meeting by asking for the facts about how the programme was made and its transmission authorised. And the facts, as they emerged, were so disturbing and discreditable to the BBC's system of control that the governors then took the further and unusual step of asking to see the programme themselves. It was shown to them, and it damned itself. Once they had seen the programme, the governors were unanimous that it was objectionable; only one of them thought it should still be transmitted, and he did so on the question- able grounds that it was better to show an undesirable programme than to be seen to accede to the Home Secretary's request.

The governors, then, far from yielding to government pressure, made up their own minds on the basis of the programme's own merits — or lack of them. Why, then, are they being criticised? The answer seems to be, and it is a pretty lame one, that they were appointed by the Government. But how else should they be appointed? Perso- nally I would be delighted to see the chairman and the director-general, and even the entire board, elected by direct universal suffrage. I have suggested that the D-G should be so chosen, in these columns. But I don't expect the BBC staff to agree to such a democratic scheme. They know very well that they are trying to `My mid-life crisis has lasted 70 years.' impose their own minority culture on the national majority, and that if the people were given a real say in BBC affairs their sleazy little game would be up. Direct popular voting might well saddle them with such anti-elitist figures as Mary White- house and Eddie Shah and Victoria Gil- lick. How would the average BBC produc- er like that? Of course, the programme makers would prefer no supervision or control at all. They see themselves as self-appointed gods in a sacrosanct BBC pantheon. Unfortunately for them, the liberal-progressive religion they seek to preach and impose on the rest of us is dependent for funds on the licence fee. To vary the metaphor, the BBC is a kept woman, and although her keeper, the public, is extraordinarily complaisant and comatose, he does insist on certain rules of conduct. These are laid down in the cus- tomary manner of parliamentary democra- cy. The public, who owns the BBC and pays for it, elects MPs; MPs provide the government; and the government appoints the BBC governors. If the BBC liberta- rians don't like the system, what alterna- tive do they propose? The truth is, they are not really objecting to government control — that's just hot air and propaganda they are objecting to public control in any shape or form. They want the public's money while reserving the right to spit upon the public interest. But if they don't like the public's opinions then let them renounce the licence fee, go out into the market and earn an honest living.

In the meantime I think we have a right to demand that those who are theoretically in charge of the BBC should make an immediate and determined effort to reas- sert their control, which this episode shows is purely nominal. Those down the BBC hierarchy who discovered or ignored stand- ing orders or failed to observe the estab- lished consultation procedures are clearly unfit for positions of responsibility and should be sacked or transferred to jobs where they can do no public harm. But the way the BBC is working, or not working, does cast doubt on the suitability both of the chairman, Stuart Young, and the Director-General, Alasdair Milne, for their respective offices. They strike one as weak and indecisive men, not up to run- ning a network whose power for good or evil (chiefly the latter, as things stand) is enormous. The BBC ought to have at any rate one strong man or woman, and granted the present n.:ss it clearly should be the chairman, for the governors are going to be obliged to use their constitu- tional muscle to bring the anarchy to order. Hence the lesson for the Government is to replace Young by a benevolent despot. This is normal procedure for a ramshackle nationalised firm being prepared for priva- tisation and it is already obvious that, one way or another, the BBC will have to be pushed into the market system. So Young should go. If he believes he is still fit for his job, let him conduct a thorough inquiry and punish the offenders.