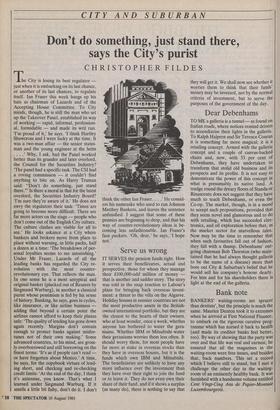 BANKERS' waiting-rooms are sprucer than dentists', but the principle is much the same. Maurice Denton took it to extremes when he arrived at First National Finance, to embark on the rigorous curative prog- ramme which has nursed it back to health (and made its creditor banks feel better, too). By way of showing that the party was over and that life was real and earnest, he ensured that all the magazines in the waiting-room were free issues, and besides that, back numbers. This set a record which I believe still to stand, but I met a challenge the other day in the waiting- room of an eminently healthy bank. It was furnished with a handsome volume entitled Cent Vingt-Cinq Ans de Papier-Monnaie Luxembourgeois.