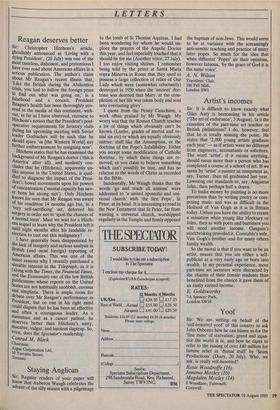 Sir: Regular readers of your paper will know that Auberon Waugh celebrates the advent of the silly season with a pilgrimage to the tomb of St Thomas Aquinas. I had been wondering for whom he would im- plore the prayers of the Angelic Doctor this year, and feel especially touched that it should be for me (Another voice, 27 July). I too enjoy visiting shrines. I remember being told by the priest at Santa Maria sopra Minerva in Rome that they used to possess a large collection of relics of Our Lady which were (somewhat reluctantly) destroyed in 1950 when the 'ancient' doc- trine was decreed that Mary 'at the com- pletion of her life was taken body and soul into everlasting glory'.

I quote from the Penny Catechism, a work often praised by Mr Waugh. My worry was that the Roman Church teaches a lot of things which obviously can't be known (Limbo, grades of mortal and ve- nial sin etc) or which are equally obviously untrue: stuff like the Assumption, or the doctrine of the Pope's Infallibility. Either you accept some modification of Catholic doctrine, by which these things are re- moved; or you claim to believe something which can't possibly be true, and has no relation to the words of Christ as recorded in the Bible.

Incidentally, Mr Waugh thinks that the words `go and teach all nations' were addressed to 'a united apostolic and uni- versal church' with `the first Pope', St Peter, at its head. It is interesting to read in the New Testament that St Peter, far from wanting a universal church, worshipped regularly in the Temple and firmly opposed the baptism of non-Jews. This would seem to be at variance with the screamingly anti-semitic teaching and practice of many later popes. So much for the idea that when different 'Popes' air their opinions, however fatuous, 'by the grace of God it is the same voice'.