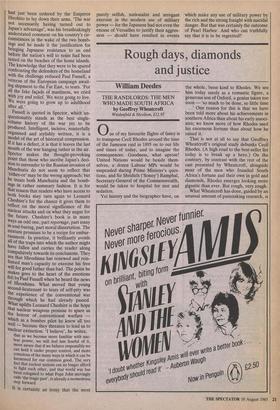 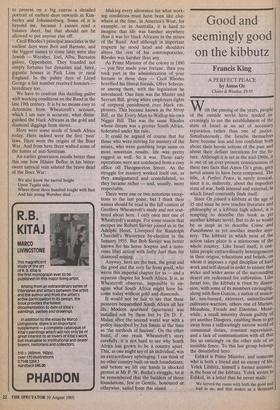 THE RANDLORDS: THE MEN WHO MADE SOUTH AFRICA by Geoffrey Wheatcroft

0 ne of my favourite flights of fancy is to transpose Cecil Rhodes around the time of the Jameson raid in 1895 on to our life and times of today, and to imagine the consequences. Goodness, what uproar! United Nations would be beside them- selves, a dozen Labour MPs would be suspended during Prime Minister's ques- tions, and Sir Shridath (`Sonny') Ramphal, Secretary-General of the Commonwealth, would be taken to hospital for rest and sedation.

Yet history and the biographer have, on the whole, been kind to Rhodes. We see him today surely as a romantic figure, a generous son of Oxford, a genius taken too soon — 'so much to be done, so little time

. .' One reason for this is that we have been told more about his achievements in southern Africa than about his early associ- ates; we know more of how Rhodes used his enormous fortune than about how he raised it.

That is not at all to say that Geoffrey Wheatcroft's original study debunks Cecil Rhodes. (A high road to the best-seller list today is to break up a hero.) On the contrary, by contrast with the rest of the cast presented by Wheatcroft, alongside most of the men who founded South Africa's fortune and their own in gold and diamonds, Rhodes emerges looking more gigantic than ever. But rough, very rough.

What Wheatcroft has done, guided by an unusual amount of painstaking research, is to present on a big canvas a detailed portrait of earliest days onwards in Kim- berley and Johannesburg. Some of it is beyond me, because I cannot read a balance sheet, but that should not be allowed to put anyone else off.

Cecil Rhodes's principal associates in the earliest days were Beit and Bamato, and the biggest' names to come later were also Jewish — Wernher, Joel, Albu, Bamatos galore, Oppenheim. They founded not simply fortunes but dynasties and, later, gigantic houses in Park Lane or rural England. In the palmy days of Lloyd George a fair number received honours hereditary too.

We have to contrast this dazzling galore with working conditions on the Rand in the late 19th century. It is by no means easy to determine from Wheatcroft's account, which I am sure is accurate, what distin- guished the black Africans in the gold and diamond diggings from slaves.

Here were some seeds of South Africa today. Here indeed were the first 'pass' laws. Here were the origins of the Boer War. And from here there wafted some of the fumes of anti-Semitism.

An earlier generation recalls better than this one how Hilaire Belloc in his bitter- sweet satirical vein saluted the brave dead of the Boer War:

We also know the sacred height Upon Tugela side, Where those three hundred fought with Beit And fair young Wernher died . .

Making every allowance for what work- ing conditions must have been like else- where at the time, in America's West, for example, or in Australia, it is hard to imagine that life was harsher anywhere than it was for black Africans in the mines of the Rand. And although in important respects he stood head and shoulders above the rest of his contemporaries, Rhodes was harsher than any.

As Prime Minister of the colony in 1890 — you first made your fortune, then you took part in the administration of your fortune in those days — Cecil Rhodes horrified his liberal friends, Olive Schrein- er among them, with the legislation he introduced. One item was the Master and Servant Bill, giving white employers rights of corporal punishment over black em- ployees. This became known as the Strop Bill, or the Every-Man-to-Wallop-his-own Nigger Bill. This was the same Rhodes whose dream was a greater South Africa, federated under his rule.

It could be argued of course that for those who were striving for mastery of the mines, who were gambling large sums on most uncertain results, life was pretty rugged as well. So it was. These early operations were not conducted from a cosy office off Throgmorton Street. As the struggle for mastery worked itself out, as they amalgamated and consolidated, so they became richer — and, usually, more respectable.

There were one or two notorious excep- tions to the last point, but I think their names should be read in the full context of Geoffrey Wheatcroft's study and not scat- tered about here. I only once met one of Wheatcroft's scamps. For some reason that escapes me Robert Sievier joined us in the Adelphi Hotel, Liverpool for Randolph Churchill's Wavertree by-election in the January 1935. But Bob Sievier was better known for his horse Sceptre and a noto- rious libel action with Solly Joel than for diamond mining.

Anyway, here are the men, the great and the good and the very far from good, who wrote this imperial chapter for us — and a separate chapter for South Africa. It is, as Wheatcroft observes, impossible to im- agine what South Africa might have be- come today without gold and diamonds.

It would not be fair to say that these pioneers bequeathed South Africa all her ills. Modem apartheid (apartness) was installed not by them but by Dr D. F. Malan after the second world war with a policy described by Jan Smuts at the time as 'the methods of fascism'. On the other hand, if one reads Wheatcroft's story carefully, it is not hard to see why South Africa has grown to be a country apart. This, as one might say of an individual, was an extraordinary upbringing. I can think of no other country built on such foundations; and before we lift our hands in shocked protest at Mr P. W. Botha's struggle, let it be remembered that the builders of those foundations, Jew or Gentile, honoured or otherwise, sailed from this island.