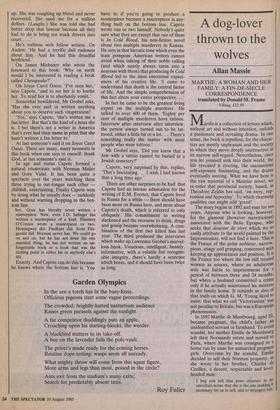 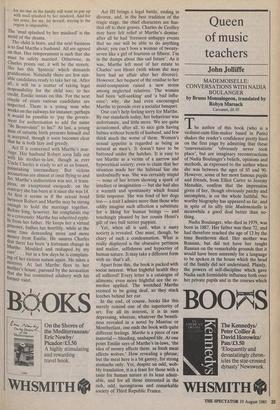 A dog-lover thrown to the wolves

MARTHE: A WOMAN AND HER FAMILY: A FIN-DE-SIECLE CORRESPONDENCE translated by Donald M. Frame

Marthe is a collection of letters which, without art and without intention, unfolds a passionate and revealing drama. In one sense, the book is repellent, for the charac- ters are mostly unpleasant and the society in which they move deeply unattractive in its narrow self-regard. Nevertheless, once you let yourself sink into their world, the life revealed is riveting, the unconscious self-exposure fascinating, and the drama eventually moving. What we have here is the raw material of a Mauriac novel; we re-enter that provincial society, based, as Theodore Zeldin has said, 'on envy, rep- ression and hypocrisy'. To which charming qualities one might add 'greed'. The story begins in 1892 and runs for ten years. Anyone who is looking, however, for the glamour (however meretricious) associated with the Belle Epoque, who seeks that douceur de vivre which we so easily attribute to the world painted by the Impressionists, will not find it here. This Is the France of the petite noblesse, narrow, pious, stingy and grasping, concerned with keeping up appearances and position. It Is the France too where the law still treated women as minors, where an adulterous wife was liable to imprisonment for a period of between three and 24 months, but where a husband committed a crime only if he actually maintained his mistress in the family home. It reminds us also of that truth on which G. M. Young liked to insist: that what we call 'Victorianism' was not peculiar to Britain, but was a European phenomenon. In 1892 Marthe de Montbourg, aged 20, became pregnant, the child's father an unidentified servant or farmhand. To avoid scandal, her mother Emilie de Montbourg left their Normandy estate and moved to Paris, where Marthe was consigned to a home run by nuns for unmarried pregnant girls. Overcome by the scandal, Emilie decided to sell their Norman property, as she wrote to her brother, Charles de Cerilley, a decent, respectable and level- headed man:

I beg you tell that poor creature M no uncertain terms that she is the one making It necessary for us to sell, and to strangers too, for no one in the family will want to put up with mud splashed by her misdeed. And for her sister, for me, for herself, staying in the region is impossible.

The 'mud splashed by her misdeed' is the motif of the drama.

The child is born, and the next business is to find Marthe a husband. All are agreed on that. Her temperament is such that she must be safely married. Otherwise, as Charles points out, it will be the streets. She has this 'hysteria' which demands gratification. Naturally there are few suit- able candidates ready to take her on. After all, it will be a matter of taking legal responsibility for the child too; to her credit, Emilie insists on this. For the next couple of years various candidates are inspected. There is a young man who works on the railways for instance; perhaps it would be possible to 'pay the govern- ment for authorisation to add the name "de Beauvoisin" to his?' At last, a young man of suitable birth presents himself and is accepted, though it soon becomes clear that he is both lazy and greedy. Act II is concerned with Marthe's mar- riage. Her husband Robert soon falls out with his mother-in-law, though as ever Uncle Charles is ready to act as an honest, painstaking intermediary. But vicious accusations are almost at once flying to and fro. Marthe's indiscretion was not, it trans- pires, an exceptional escapade; on the contrary she has been at it since she was 14. At first it seems as if the sexual bond between Robert and Marthe may be strong enough to hold the marriage together. Before long, however, his complaints rise to a crescendo: Marthe has inherited syphi- lis from her father. He keeps her a virtual Prisoner, bullies her horribly, while at the same time demanding more and more money from Emilie. He assures Charles that there has been 'a fortunate change in Marthe. Moulded and reshaped by my care' . . . but in a few days he is complain- ing of her vicious nature again. He takes a mistress. At last Marthe flees to her mother's house, pursued by the accusation that she has committed adultery with his former valet. Act III brings a legal battle, ending in divorce, and, in the best tradition of the tragic stage, the chief characters are hus- tled off to their graves. Charles de Cerilley may have felt relief at Marthe's demise: after all he had 'foreseen unhappy events that no one will be able to do anything about; you can't boss a woman of twenty- seven like a girl of fourteen or fifteen. I'm in the dumps about this sad future'. As it was, Marthe left most of her estate to Charles' son Henri (with whom she may have had an affair after her divorce). However, her bequest of the residue to her maid-companion raised a new storm among neglected relatives. The woman had been 'self-seeking' and 'a bad influ- ence'; why, she had even encouraged Marthe to preside over a socialist banquet. One can't help feeling sorry for Marthe. By our standards today, her behaviour was unfortunate, and little more. We are quite accustomed, after all, to nice girls having babies without benefit of husband, and few think much the worse of them. Women's sexual appetite is regarded as being as natural as men's. It doesn't have to be battened under the hatches. It is easy to see Marthe as a victim of a narrow and hypocritical society; even to claim that her situation made her the habitual liar she undoubtedly was. She was certainly stupid — none of her letters showing a spark of intellect or imagination — but she had also a warmth and spontaneity which found little response. She was fond of her dogs too — a trait I admire more than those who oddly imagine such affection a substitute for a liking for human beings — and touchingly pleased by her cousin Henri's gift of two bull terrier puppies. Yet, when all is said, what a nasty society is revealed. One must, though, be chary of such a. condemnation. What is really displayed is the obsessive pettiness and malice, selfishness and hypocrisy of human nature. It may take a different form with us: that's all.

Apart from this, the book is packed with social interest. What frightful health they all suffered! Every letter is a catalogue of ailments; even more frightful are the re- medies applied. The wretched Marthe seemed to be going deaf, so they stuck S leeches behind her ear. In the end, of course, books like this merely remind one of the superiority of art. For all its interest, it is in sum depressing, whereas, whatever the beastli- ness revealed in a novel by Mauriac or Montherlant, one ends the book with quite different feelings. Marthe is a piece of raw material — bleeding, unshaped life. At one point Emilie says of Marthe's in-laws, 'the idea of money affects them, as fresh meat affects wolves.' How revealing a phrase; but the meat here is a bit gamey, for strong stomachs only. Yet, despite an odd, wob- bly translation, it is a feast for those with a taste for human nature at its least admir- able, and for all those interested in the rich, odd, incongruous and remarkable society of Third Republic France.