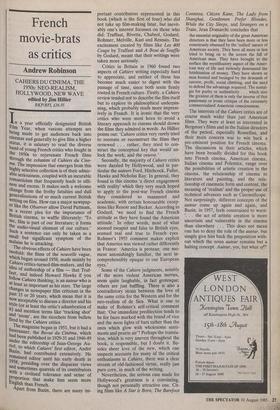 In a year officially designated British Film Year, when various attempts are being made to get audiences back into cinemas and generally to give film a higher status, it is salutary to read the diverse band of young French critics who fought in the 1950s to rejuvenate French films through the columns of Cahiers du Cine- ma. The impression that emerges from this highly selective collection is of their admir- able seriousness coupled with an incurable romanticism that frequently leads to silli- ness and excess. It makes such a welcome change from the frothy fatuities and dull generalisations of so much current British writing on film. How can a major newspap- er like the Observer allow David Puttnam, ul. a recent plea for the importance of British cinema, to waffle illiterately: 'To me, film is part of our literature; it forms the audio-visual element of our culture.' Such a sentence can only be taken as a small but significant symptom of the malaise he is attacking. The obvious effects of Cahiers have been twofold: the films of the nouvelle vague, which began around 1958, made mainly by C. ahiers critics-turned-film-makers, and the idea of authorship of a film — that Truf- faut, and indeed Howard Hawks if you follow Cahiers thinking, is an auteur who is at least as important as his stars. The large changes in newspaper film criticism in the past 15 or 20 years, which mean that it is now acceptable to discuss a director and his style (or at least the critic's adumbration of it) and mention terms like `tracking shot' and 'zoom', are the ricochets from bullets fired by the Cahiers critics. The magazine began in 1951, but it had a forerunner, the Revue du Cinema, which had been published in 1929-31 and 1946-49 under the editorship of Jean-George Au- riol, to which Cahiers' first editor, Andre Bazin, had contributed extensively, He remained editor until his early death in 1958, presiding over the disparate views and sometimes quarrels of its contributors with a civilised tolerance and sense of proportion that make him seem more English than French. Apart from Bazin, there are many im- portant contributors represented in this book (which is the first of four) who did not take up film-making later, but inevit- ably one's interest focusses on those who did: Truffaut, Rivette, Chabrol, Godard, Rohmer, Melville, Kast and Resnais. The excitement created by films like Les 400 Coups by Truffaut and A Bout de Souffle by Godard, meant that their writings were taken more seriously.

Critics in Britain in 1960 found two aspects of Cahiers writing especially hard to appreciate, and neither of these has become much easier to digest with the passage of time, since both seem firmly rooted in French culture. Firstly, a Cahiers review tended not to describe the film itself but to explore its philosophical underpin- ning, which probably reads more impress- ively in French. It is ironic that the very critics who were most keen to avoid a literary approach to cinema should drown the films they admired in words. As Hillier points out: `Cahiers critics very rarely tried to recreate or reconstruct the films they reviewed . . . rather, they tried to con- struct the conceptual key that would un- lock the work, and the oeuvre.'

Secondly, the majority of Cahiers critics were dazzled by Hollywood, and in par- ticular the auteurs Ford, Hitchcock, Fuller, Hawks and Nicholas Ray. In general, they found in this cinema `a direct engagement with reality' which they very much hoped to apply to the post-war French cinema they considered so mannered and academic, with certain honourable excep- tions like Renoir and Becker. According to Godard, `we need to find the French attitude as they have found the American attitude.' In other words, most of what seemed escapist and false to British eyes, seemed real and true to French eyes. Rohmer's 1955 comment makes explicit that America was viewed rather differently in France: `America is protean: one mo- ment astonishingly familiar, the next in- comprehensibly opaque to our European eyes.' Some of the Cahiers judgments, notably of the more violent American movies, seem quite laughable, in fact grotesque; others are just baffling. There is also a contradictory strain between the love of the same critic for the Western and for the neo-realism of de Sica. What is one to make of Rohmer's self-critical comment that: `Our immediate predilection tends to be for faces marked with the brand of vice and the neon lights of bars rather than the ones which glow with wholesome senti- ments and prairie air'? Perhaps the transla- tion, which is very uneven throughout the book, is responsible, but I doubt it. Be- sides sheer love of the new, which one suspects accounts for many of the critical enthusiasms in Cahiers, there was a clear stream of old-fashioned virtue, really just pure corn, in much of the writing. Nevertheless, the serious case made for Hollywood's greatness is a convincing, though not personally attractive one. Cit- ing films like A Star is Born, The Barefoot Contessa, Citizen Kane, The Lady from Shanghai, Gentlemen Prefer Blondes, While the City Sleeps, and Strangers on a Train, Jean Domarchi concludes that

the essential originality of the great American directors is that they have been more or less consciously obsessed by the 'reified' nature of American society. They have all more or less tried to bring on to the screen the fall of American man. They have brought to the surface the mystificatory aspect of the Amer- ican way of life and violently denounced the fetishisation of money. They have shown us man hunted and besieged by the demands of success, profit, social climbing, and the need to defend the advantage acquired. The nostal- gia for purity or authenticity . . . which stirs the greatest of them is only the inverse of that passionate or ironic critique of the extremely commercialised American consciousness.

The interests of the Cahiers critics are of course much wider than just American films. They were at least as interested in Bergman's films and in the Italian directors of the period, especially Rossellini, and their main concern was to win back a pre-eminent position for French cinema. The discussions in their articles, which have been broadly divided for this book into French cinema, American cinema, Italian cinema and Polemics, range over the possibilities of artistic creation in the cinema, the relationship of cinema to literature and painting, and the rela- tionship of cinematic form and content, the meaning of `realism' and the proper use of technical advances such as CinemaScope. Not surprisingly, different concepts of the auteur come up again and again, and Bazin, in 1957, feels constrained to warn: . .. the act of artistic creation is more uncertain and vulnerable in the cinema than elsewhere . . . This does not mean one has to deny the role of the auteur, but simply give him back the preposition with- out which the noun auteur remains but a halting concept. Auteur, yes, but what of?'