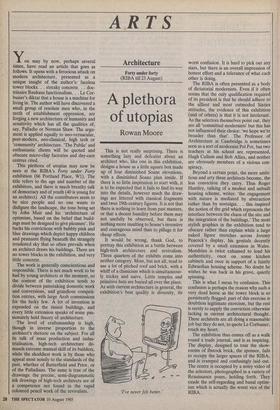 Forty under forty (RIBA till 23 August)

A plethora of utopias

You may by now, perhaps several times, have read an article that goes as follows. It opens with a ferocious attack on modern architecture, presented as a unique insight of the author's: faceless tower blocks. . . streaky concrete. . . doc- trinaire Bauhaus functionalism. . . Le Cor- busier's diktat that a house is a machine for living in. The author will have discovered a small group of resolute men who, in the teeth of establishment oppression, are forging a new architecture of humanity and sensitivity which has all the qualities of, say, Palladio or Norman Shaw. The argu- ment is applied equally to neo-vernacular, post-modern, neo-classical, high tech or `community' architecture. 'The Public' and enthusiastic clients will be quoted and obscure micro-chip factories and day-care centres cited.

This plethora of utopias may now be seen at the RIBA's Forty under Forty exhibition (66 Portland Place, W1). The title refers to the age and number of the exhibitors, and there is much breathy talk of democracy and of youth (40 is young for an architect). All the contributors seem to be nice people and no one wants to disfigure the landscape, the tone being set by John Muir and his 'architecture of optimism, based on the belief that build- ings must be designed to give pleasure'. He backs his convictions with bubbly pink and blue drawings which depict happy children and pennants flying beneath the strangely irradiated sky that so often prevails when an architect draws his buildings. There are no tower blocks in the exhibition, and very little concrete.

The work is generally conscientious and responsible. There is not much work to be had by young architects at the moment, so the content of the exhibition tends to divide between painstaking domestic work and conversions, and grandiose competi- tion entries, with large Arab commissions for the lucky few. A lot of invention is expended on the tiniest buildings, and every little extension speaks of some pas- sionately held theory of architecture.

The level of craftsmanship is high, though in inverse proportion to the architect's rhetoric on the subject. For all its talk of mass production and indus- trialisation, high-tech architecture de- mands extreme manual skill of its builders, while the shoddiest work is by those who appeal most noisily to the standards of the past, whether of Butterfield and Prior, or of the Palladians. The same is true of the drawings: the precise, semi-diagrammatic ink drawings of high-tech architects are of a competence not found in the vapid coloured pencil work of the revivalists. This is not really surprising. There is something lazy and defeatist about an architect who, like one in this exhibition, designs a house as a little square box made up of four diminished Soane elevations, with a diminished Soane plan inside. If there is so little inspiration to start with, it is to be expected that it fails to find its way into the details, however much the draw- ings are littered with classical fragments and twee 19th-century figures. It is not that there is nothing to learn from past masters, or that a decent humility before them may not usefully be observed, but there is nothing more insulting to Soane's inventive and courageous mind than to pillage it for cheap effects.

It would be wrong, thank God, to portray this exhibition as a battle between high-tech architecture and revivalism. Three quarters of the exhibits come into neither category. Most, but not all, tend to use a lot of pitched roof and brick, with a whiff of a classicism which is simultaneous- ly tricksy and naive. Little temples and primitive huts are buried all over the place. As with current architecture in general, the exhibition's best quality is diversity, its `I've never felt better.' worst confusion. It is hard to pick out any stars, but there is an overall impression of honest effort and a tolerance of what each other is doing.

The RIBA is often presented as a body of dictatorial modernists. Even if it often seems that the only qualification required of its president is that he should adhere to the silliest and most outmoded Sixties attitudes, the evidence of this exhibition (and of others) is that it is not intolerant.

As the selectors themselves point out, they are all 'committed modernists' but this has not influenced their choice: 'we hope we're broader than that'. The Professor of Architecture at Cambridge is sometimes seen as a sort of modernist Pol Pot, but two teachers at his school are represented, Hugh Cullum and Bob Allies, and neither are obviously members of a vicious con- spiracy.

Beyond a certain point, the more ambi- tious and arty these architects become, the less conviction they carry. Thus Roger Huntley, talking of a modest and unbuilt housing scheme, writes: `the engagement with nature is mediated by abstraction rather than by nostalgia. . . this inspired the notion of the grid which represents the interface between the chaos of the site and the integration of the buildings.' The most stylish graphics in the exhibition tend to obscure rather than explain while a large naked figure stretches across Jeremy Peacock's display, his genitals decently covered by a small extension in Wales.

Mondrian is twice exhumed to lend his authenticity, once on some kitchen cabinets and once in support of a faintly Edwardian housing scheme. No doubt he wishes he was back in his grave, quietly spinning.

This is what I mean by confusion. This confusion is perhaps the reason why such a very dead horse as the tower block is so persistently flogged: part of this exercise is doubtless legitimate exorcism, but the rest is surely to supply the conviction otherwise lacking in current architectural thought. These architects are all doing a reasonable job but they do not, to quote Le Corbusier, touch my heart.

The exhibition thus comes off as a walk round a trade journal, and is as inspiring.

The display, designed to tour the show- rooms of Ibstock brick, the sponsor, fails to occupy the larger spaces of the RIBA, and is cramped and confusingly laid out.

The centre is occupied by a noisy video of the selectors, photographed in a variety of Renaissance poses, holding forth. They exude the self-regarding and banal optim- ism which is actually the worst vice of the RIBA.