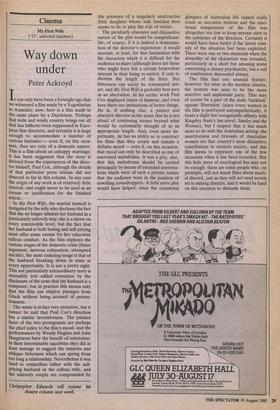 It can only have been a fortnight ago that we witnessed a film made by a Yugoslavian in Australia; now, here is a film made in the same place by a Dutchman. Perhaps that wide and windy country brings out all that has hitherto been suppressed in Euro- pean film directors, and certainly it is large enough to accommodate a number of curious fantasies — even if, on this occa- sion, they are only of a domestic nature. This is a film about an unhappy marriage; it has been suggested that the story is derived from the experiences of the direc- tor himself, Paul Cox, although the details of that particular press release did not descend as far as this column. In any case the origin of any work is of relatively little interest, and ought never to be used as an excuse or justification for the finished article.

In My First Wife, the marital turmoil is instigated by the wife who discloses the fact that she no longer admires her husband in a Particularly unlovely way; she is a shrew on every conceivable level, but the fact that her husband is both boring and self-pitying must offer some excuse for her otherwise callous conduct. As the film explores the various stages of the domestic crisis (bitter argument, nervous exhaustion, attempted suicide), the most enduring image is that of the husband breaking down in tears at every opportunity. It is not a pretty sight. This not particularly extraordinary story is ostensibly lent added resonance by the disclosure of the news that the husband is a composer, but in practice this means only that the film can employ passages from Gluck without being accused of porten- tousness.

The music is in fact very attractive, but it cannot be said that Paul Cox's direction has a similar inventiveness. The painted faces of the two protagonists are perhaps the chief index to the film's mood, and the performances by Wendy Hughes and John Hargreaves have the benefit of conviction: in their interminable squabbles they did at least manage to suggest the tensions and oblique bitterness which can spring from too long a relationship. Nevertheless it was hard to sympathise either with the self- Pitying husband or the callous wife, and the unlovely couple are compounded by the presence of a singularly unattractive little daughter whose sole function here seems to be to play the role of victim.

The peculiarly obsessive and disjunctive nature of the plot would be comprehensi- ble, of course, if it is indeed a dramatisa- tion of the director's experience: it would account, at least, for that fascination with his characters which it is difficult for the audience to share (although there are those who might have felt a certain benevolent interest in their being re-united, if only to shorten the length of the film). But bitterness can rarely be transmuted into art, and My First Wife is probably best seen as an aberration. In his earlier work Paul Cox displayed traces of humour, and even here there are intimations of better things. He is, if nothing else, a patient and attentive director in the sense that he is not afraid of continuing scenes beyond what would be customarily thought of as an appropriate length. And, even more im- portantly, he has an ability so to construct his films that they create and sustain a definite mood — even if, on this occasion, that mood can only be described as one of enervated melodrama. It was a pity, also, that this melodrama should be carried principally by means of extended conversa- tions which were of such a private nature that the audience were in the position of unwilling eavesdroppers. A little more plot would have helped, since the occasional glimpses of Australian life cannot really count as narrative interest and the emo- tional temperature of the film was altogether too low to keep anyone alert to the subtleties of the direction. Certainly it would have been better if the latent com- edy of the situation had been exploited. There were one or two moments when the absurdity of the characters was revealed, particularly in a short but amusing scene concerning a clumsy psychiatrist, but a veil of sombreness descended always.

The film had one unusual feature, however: for once in the modern cinema, the woman was seen to be the more assertive and unpleasant party. That may of course be a part of the male 'backlash' against 'liberation' (since every woman in the film is portrayed unsympathetically, it bears a slight but recognisable affinity with Kingsley Amis's last novel, Stanley and the Women), but I suspect that it has much more to do with the Australian setting: the assertiveness and bravado of Australian women are that country's most distinctive contribution to western society, and this film seems to represent one of the few occasions when it has been recorded. But this little piece of sociological fun may not be enough: there are some people who, on principle, will not watch films about marit- al discord, just as they will not read novels set in mining districts, and it would be hard on this occasion to dissuade them.