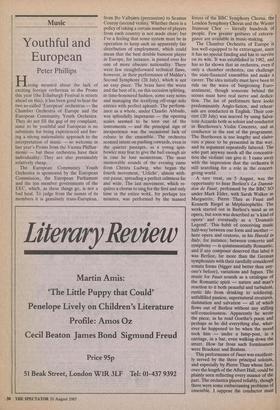 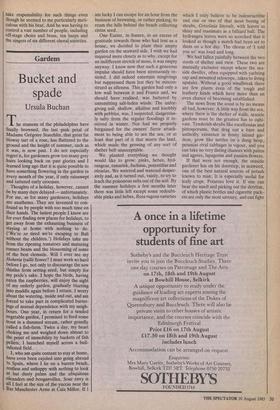 laving moaned about the lack of exciting foreign orchestras in the Proms this year (the Edinburgh Festival is streets ahead on this), it has been good to hear the two so-called 'European' orchestras — the Chamber Orchestra of Europe and the European Community Youth Orchestra. They do not fill the gap of my complaint, since to be youthful and European is no substitute for being experienced and hav- ing a strong nationalistic approach to the interpretation of music — so welcome in last year's Proms from the Vienna Philhar- monic — but these orchestras have their individuality. They are also presumably relatively cheap.

The European Community Youth Orchestra is sponsored by the European Commission, the European Parliament and the ten member governments of the EEC, which, as these things go, is not a bad haul. To judge from the names of its members it is genuinely trans-European, from Bo Valbjorn (percussion) to Seamus Conroy (second violin). Whether there is a policy of taking a certain number of players from each country is not made clear; but I've a feeling that some system must be in operation to keep such an apparently fair distribution of employment, which could mean that the best double bassoon player in Europe, for instance, is passed over for one of more obscure nationality. There were few straightforward technical flaws, however, in their performance of Mahler's Second Symphony (28 July), which is not an easy piece. The brass have the worst and the best of it, on this occasion splitting, in time-honoured fashion, some easy notes and managing the terrifying off-stage solo entries with perfect aplomb. The perform- ance as a whole, under Claudio Abbado, was splendidly impetuous — the opening scales seemed to be torn out of the instruments — and the principal sign of inexperience was the occasional lack of rubato in the ensemble. The orchestra seemed intent on pushing onwards, even in the quieter passages, as a young spin- bowler may fear to give the ball enough air in case he lose momentum. The most memorable sounds of the evening came from Christa Ludwig, who began the fourth movement, `I.Jrlicht', almost with- out pause, spreading a perfect calmness far and wide. The last movement, which re- quires a chorus to singg, for the first and only time in the entire wark, for perhaps ten minutes, was performed by the massed, forces of the BBC Symphony Chorus, the London Symphony Chorus and the Wiener Jeunesse Chor — literally hundreds of people. Few greater gestures of extrava- gance are available in music-making.

The Chamber Orchestra of Europe is less well-equipped to be extravagant, since it has no special funding and has to survive on its wits. It was established in 1982, and has so far shown that an orchestra, even if only a chamber orchestra, can challenge the state-financed ensembles and make a career. The idea initially must have been to ride on the wave of burgeoning Euro- sentiment, though someone behind the scenes must have real nerve and dedica- tion. The list of performers here looks predominantly Anglo-Saxon, and rehear- sals are conducted in English. Their con- cert (20 July) was marred by using Salva- tore Accardo both as soloist and conductor in Beethoven's Violin Concerto, and as conductor in the rest of the programme. The Beethoven is too lengthy and elabo- rate a piece to be presented in this way, and its argument repeatedly faltered. The solo part anyway needs all the concentra- tion the violinist can give it. I came away with the impression that the orchestra is still searching for a role in the concert- giving world.

A rare treat, on 5 August, was the opportunity to hear Berlioz's La Damna- tion de Faust, performed by the BBC SO under Mark Elder, with Sarah Walker as Marguerite, Pierre Thau as Faust and Kenneth Riegel as Mephistopheles. The work started out in Berlioz's mind as an opera, but soon was described as 'a kind of opera' and eventually as a 'Dramatic Legend'. This habit of conceiving music half-way between one form and another here opera and oratorio, in his Harold in Italy, for instance, between concerto and symphony — is quintessentially Romantic; and if any composer deserved that label it was Berlioz, far more than the German symphonists with their carefully considered sonata forms (bigger and better than any- one's before), variations and fugues. The music for Faust sounds as a catalogue of the Romantic spirit — nature and man's reaction to it both peaceful and turbulent, rustic life from drinking to soldiering, unfulfilled passion, supernatural creatures, damnation and salvation — all of which flows out of Berlioz without any stifling self-consciousness. Apparently he wrote the piece, as he read Goethe's poem and perhaps as he did everything else, wher- ever he happened to be when the mood took him — under a lamp-post, in a carriage, in a bar, even walking down the street. How far from such formlessness were Bruckner and Brahms.

This performance of Faust was excellent- ly served by the three principal soloists, and especially by Pierre Thau whose face, over the length of the Albert Hall, could be plainly seen reflecting every nuance of the part. The orchestra played reliably, though there were some embarrassing problems of ensemble. I suppose the conductor must take responsibility for such things even though he seemed to me particularly meti- culous with his beat. And he was having to control a vast number of people, including off-stage choirs and brass, ten harps and the singers of six different choral societies.