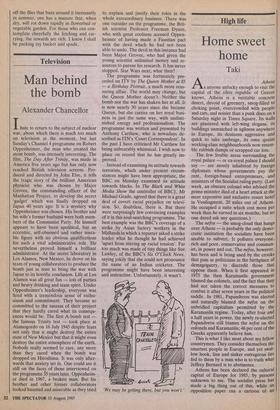 Man behind the bomb

Ihate to return to the subject of nuclear war, about which there is much too much on television at the moment, but last Sunday's Channel 4 programme on Robert Oppenheimer, the man who created the atom bomb, was intensely interesting. The film, The Day After Trinity, was made in America five years ago but has only now reached British television screens. Pro- duced and directed by John Else, it tells the tragic story of the brilliant American physicist who was chosen by Major Groves, the commanding officer of the Manhattan Project, to develop the secret `gadget' which was finally dropped on Japan 40 years ago. It is a mystery why Oppenheimer was chosen. His brother and his wife's former husband were both mem- bers of the Communist Party. He himself appears to have been apolitical, but an eccentric, self-obsessed and rather unsta- ble figure with no obvious qualifications for such a vital administrative role. He nevertheless proved himself a brilliant administrator. At the secret laboratory in. Los Alamos, New Mexico, he drove on his team of young collaborators to produce the bomb just in time to bring the war with Japan to its horrific conclusion. Life at Los Alamos was all great fun — lots of parties and heavy drinking and team spirit. Under Oppenheimer's leadership, everyone was fired with a tremendous sense of enthu- siasm and commitment. They became so committed to the success of their project that they hardly cared what its consequ- ences would be. The first A-bomb test the famous Trinity test — took place at Alamogordo on 16 July 1945 despite fears not only that it might destroy the entire state of New Mexico but that it might even destroy the entire atmosphere of the earth. Nobody really seemed to care, any more than they cared when the bomb was dropped on Hiroshima. It was only after- wards that anxiety set in. One could see it still on the faces of those interviewed on the programme 35 years later. Oppenheim- er died in 1967, a broken man. But his brother and other former collaborators looked haunted and miserable as they tried to explain and justify their roles in the whole extraordinary business. There was one outsider on the programme, the Brit- ish scientist Professor Freeman Dyson, who with great coolness accused Oppen- heimer of having made a Faustian pact with the devil which he had not been able to undo. The devil in this instance had been Major Groves, who had given the young scientist unlimited money and re- sources to pursue his research. It has never stopped. Star Wars next; what then?

The programme was fortunately pre- ceded on ITV by The Queen Mother at 85 — a Birthday Portrait, a much more reas- suring affair. The world may change, but the Queen Mother doesn't. Neither the bomb nor the war has shaken her at all. It is now nearly 50 years since she became Queen, but she carries on her royal busi- ness in just the same way, with undimi- nished energy and professionalism. The programme was written and presented by Anthony Carthew, who is nowadays de- scribed as ITN's 'Court Correspondent'. In the past I have criticised Mr Carthew for being unbearably whimsical. I wish now to place on record that he has greatly im- proved.

Instead of examining its attitude towards terrorists, which under present circum- stances might have been appropriate, the BBC on Monday examined its attitude towards blacks. In The Black and White Media Show the controller of BBC1, Mr Michael Grade, agreed that there is a great deal of covert racial prejudice on televi: sion. So, doubtless, there is. But there were surprisingly few convincing examples of it in this soul-searching programme. The best example was the BBC's coverage of a strike by Asian factory workers in the Midlands in which a reporter asked a strike leader what he thought he had achieved `apart from stirring up racial tension'. Far too much was made of tiny things like Sue Lawley, of the BBC's Six O'Clock News, saying jokily that she could not pronounce the name of an Indian cricketer. The programme might have been interesting and instructive. Unfortunately, it wasn't.

'We may be getting there, but you won't.'