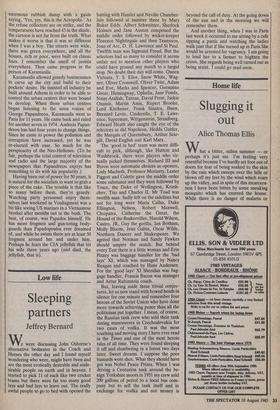 We were discussing John Osborne's alternative bedmates in the Coach and Horses the other day and I found myself wondering who were, might have been and are the most erotically desirable and unde- sirable people on earth and in heaven. I started to pick 11 of each like two cricket teams but there were far too many good lays and bad lays to leave out. The really awful people to go to bed with opened the batting with Hamlet and Neville Chamber- lain followed at number three by Mary Baker Eddy. Albert Schweitzer, Sherlock Holmes and Jane Austen comprised the middle order followed by wicket-keeper Florence Nightingale and then Tennyson, Joan of Arc, D. H. Lawrence and St Paul. Twelfth man was Sigmund Freud. But the selectors had so many to consider it seems unfair not to mention other players who could have ground any match to a turgid stop. No doubt their day will come. Queen Victoria, T. S. Eliot, Snow White, Wag- ner, Oliver Cromwell, Oliver Twist, Adam and Eve, Marks and Spencer, Germaine Greer, Hemingway, Ophelia, Jane Fonda, Naim Atallah, Tarzan, David Frost, Jackie Onassis, Martin Amis, Rupert Brooke, Lord Kitchener, Frank Sinatra, Ibsen, Bernard Levin, Cinderella, T. E. Lawr- ence, Superman, Wittgenstein, Strindberg, Edward Heath also caught the eye of the selectors as did Napoleon, Hedda Gabler, the Marquis of Queensbury, Arthur Scar- gill, David English and Karl Marx.

The 'good in bed' team was more diffi- cult to pick, although, like Hutton and Washbrook, there were players who vir- tually picked themselves. Richard III and Byron were automatic choices as openers, Lady Macbeth, Professor Moriarty, Lester Piggott and Colette gave the middle order some substance and they were followed by Tosca, the Duke of Wellington, Krush- chev, Tito and Charles II. Mr Toad was twelfth man. Sadly left on the sidelines but not for long were Maria Callas, Duke Ellington, Nelson, Robert Maxwell, Cleopatra, Catherine the Great, the Hound of the Baskervilles, Harold Wilson, Castro, JR, Guy the gorilla, Ian Botham, Molly Bloom, Jean Gabin, Oscar Wilde, Northern Dancer and Shakespeare. We agreed that Norman and Sandy Fawkes should umpire the match. But behind every Test there is a little woman and Erin Pizzey was baggage handler for the 'bad lays' XI, which was managed by Nancy Reagan and coached by Hans Andersen. For the 'good lays' XI Sheridan was bag- gage handler, Francis Bacon was manager and Artur Rubinstein coach.

But, leaving aside these trivial conjec- tures, let us now stand with bowed heads in silence for one minute and remember four heroes of the Soviet Union who have done more towards achieving peace than all the politicians put together. I mean, of course, the Russian tank crew who sold their tank during manoeuvres in Czechoslovakia for two cases of vodka. It was the most touching and moving story I have ever read in the Times and one of the most heroic tales of all time. They were found sleeping it off and slumbering in a forest two days later. Sweet dreams. I suppose the poor bastards were shot. What they should have got was Nobel Peace Prizes. When I was driving a Centurion tank around the be- nign Yorkshire moors in 1951 my crew sold 200 gallons of petrol to a local bus com- pany but to sell the tank itself and in exchange for vodka and not money is beyond the call of duty. At the going down of the sun and in the morning we will remember them.

And another thing, when I was in Paris last week it occurred to me sitting by a cafe sipping a pastis and watching the ladies walk past that if She turned up in Paris She would be arrested for vagrancy. I am going to lend her to a farmer to frighten the crows. She regards being well turned out as being sexist. I could go mad soon.