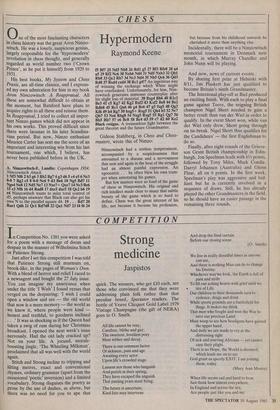 0 ne of the most fascinating characters in chess history was the great Aron Nimzo- witsch. He was a lonely, suspicious genius,

largely responsible for the 'hypermodern' revolution in chess thought, and generally regarded as world number two (`Crown Prince', as he put it himself) from 1929 to 1931.

His best books, My System and Chess Praxis, are all-time classics, and I express-

ed my own admiration for him in my book

Aron Nimzowitsch: A Reappraisal. All these are somewhat difficult to obtain at the moment, but Batsford have plans to acquire rights to all these and reissue them. In Reappraisal, I tried to collect all impor-

tant Nimzo games which did not appear in his own works. This proved difficult since there were lacunae in his later Scandina- vian period. But now, Nimzo enthusiast Maurice Carter has sent me the score of an important and interesting win from his last tournament, one which, I believe, has never been published before in the UK.

Gideon Stahlberg, in Chess and Chess- masters, wrote this of Nimzo:

Nimzowitsch had a restless temperament, accompanied by a suspiciousness that amounted to a disease and a nervousness that now and again in the heat of the struggle had an almost painful expression. An egocentric . . . he often blew his own trum- pet when annotating his games. But few masters were so fond of the game of chess as Nimzowitsch. His original and rich intellect made clear to many that subtle beauty of the game which is so hard to define. Chess was the great interest of his life, not because it became his profession, but because from his childhood onwards he cherished it more than anything else. Incidentally, there will be a Nimzowitsch memorial tournament in Denmark next month, in which Murray Chandler and John Nunn will be playing.

And now, news of current events.

The Interzonal play-off at Biel produced an exciting finish. With each to play a final game against Torre, the reigning British champion Nigel Short needed to gain a better result than van der Wiel in order to qualify. In the event Short won, while van der Wiel only drew, Short going through on tie-break. Nigel Short thus qualifies for the Candidates' — the first Englishman to do so.

Finally, after eight rounds of the Grieve- son Grant British championship in Edin- burgh, Jon Speelman leads with 61/2 points, followed by Tony Miles, Mark Condie, Darryl Johansen (Australia) and Glenn Flear, all on 6 points. In the first week, Speelman's play was aggressive and bril- liant but he is currently involved in a sequence of draws. Still, he has already played the other Grandmasters in the field, so he should have an easier passage in the remaining three rounds.