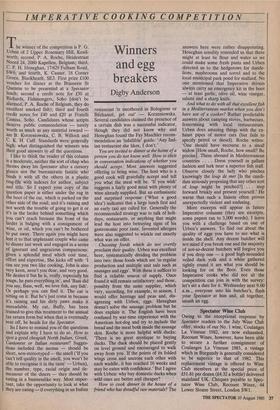 he winner of the competition is P. G. Urben of 2 Upper Rosemary Hill, Kenil- worth; second, P. A. Roche, Heidestraat Noord 24, 2080 Kapellen, Belgium; third, C. P. FL Heneghan, 17/629 Fulham Road, SW6; and fourth, K. Causer, 18 Corner Green, Blackheath, SE3. First prize £100 voucher for dinner at the Brasserie St Quentin to be presented at a Spectator lunch; second a credit note for £50 at Richards, Fishmongers, Soho (don't be alarmed, P. A. Roche of Belgium, they do excellent smoked fish); third and fourth credit notes for £40 and £20 at Fratelli Camisa, Soho. Candidates whose scripts deserve public commendation — surely worth as much as any material reward are B. Korzeniowska, C. B. Willock and C. K. H. Cuff. Standards were generally high: what distinguished the winners was their good answers to all the questions.

I like to think the reader of this column is a moderate, neither the sort of chap who throws away his Spectator after a cursory glance nor the bureaucratic fanatic who binds it with all the others in a plastic ring-file with indexes for author, subject and title. So I expect your copy of the question paper is either under the rug in the boot of the car, which is parked on the other side of the road, and it's raining and not worth the trouble of going to get it or it's in the larder behind something which You can't reach because the front of the larder is bulging with a consignment of wine, or oil, which you can't be bothered to put away. There again you might have lent it to that unpleasant couple who came to dinner last week and engaged in a series of ignorant and ungracious comparisons: given a splendid meal which cost time, effort and expertise, She kicks off with: 'I can see you two like cooking, John is also very keen, aren't you dear, and very good. He denies it but he is, really, especially his soups, he puts everything in', and 'Bass did you say, Bass, well, we love fish, any fish'. Or perhaps you can find it. The cat is sitting on it. But he's just come in because it's raining and his dirty paws make it unreadable. My cat, Buffy, has been trained to give this treatment to the annual tax return form but when that is eventually sent off, he heads for the Spectator.

So I have to remind you of the questions and explain why I have to do so. How to spot a good cheapish North Indian, Greek, Cantonese or Italian restaurant? Sugges- tions included the menus — should be short, non-stereotyped — the smell (If you can't tell quality in the smell, you won't be able to recognise it in the taste' — Urben), the number, type, racial origin and de- meanour of the diners — they should be eating in a businesslike way. Most impor- tant, take the opportunity to look at what they are eating — if everything in an Italian restaurant 'is smothered in Bolognese or Bechamel, get out' — Korzeniowska. Several candidates claimed the presence of a certain dish was a successful indicator, though they did not know why and Heneghan found the Fay Maschler recom- mendation an 'infallible' guide: 'Any Ind- ian restaurant she likes, I don't.'

You are invited to dinner at the home of a person you do not know well. How to elicit in conversation indications of whether you should accept. Most answers suggested offering to bring wine. The host who is a good cook will gratefully accept and tell you what the meal will be. 'If you wish' suggests a fairly good meal with plenty of wine already supplied. But an enthusiastic and surprised response ('What a good idea') indicates that a large lunch first and an early taxi are called for. Generally the recommended strategy was to talk of holi- days, restaurants, or anything that might lead the host into betraying signs of his gastronomic poor taste. Invented allergies were also suggested to winkle out exactly what was on offer.

Choosing foods which do not overtly proclaim their quality. Urben was excellent here, systematically dividing the problem into two: those foods which are 'in regular production and multiple unit sale such as sausages and eggs'. With these it suffices to find a reliable source of supply. Once found it will remain satisfactory: and those, possibly from the same supplier, which vary, according, for example, to season. I would offer herrings and peas and, dis- agreeing with Urben, eggs. Heneghan doesn't solve the sausage problem but he does explain it. The English have been confused by war-time experience with the American hot-dog and try to include the bread and the meat both inside the sausage skin. Roche is more helpful with ducks: `There is no great mystique to buying ducks. The duck should be placed gently on level ground and encouraged to walk away from you. If the points of its folded wings cross and uncross each other with each waddle, it has reached 16 weeks and may be eaten with confidence.' But I agree with Urben: why buy domestic ducks when wild ones are better and cheaper?

How to cook dinner in the house of a friend who has dreadful raw materials? The answers here were rather disappointing. Heneghan sensibly reminded us that there might at least be flour and water so we could make some fresh pasta and Urben directed us to the hedgerows for dande- lions, mushrooms and sorrel and to the local municipal park pond for mallard. No one mentioned that Imperative drivers always carry an emergency kit in the boot — at least garlic, olive oil, wine vinegar, salami and a sharp knife.

And what to do with all that excellent fish in a Mediterranean market when you don't have use of a cooker? Rather predictable answers about camping stoves, barbecues, fraternising with local restaurateurs. Urben does amazing things with the ex- haust pipes of motor cars (but fails to specify petrol or diesel). Roche writes: `One should have recourse to a small widow [How small, Roche, how small? Be precise]. These abound in Mediterranean countries . . Dress yourself in gallant fashion and lurk near a superior fish stall. Observe closely the lady who pinches knowingly the loup de mer [Is the candi- date seriously proposing that any other sort of loup might be pinched?] . . . step forward briskly and present yourself.' He warns that such a liaison often proves unexpectedly violent and enduring.

More excerpts will appear in future Imperative columns (they are excerpts, some papers ran to 3,000 words). I leave you with a challenge based on one of Urben's answers. To find out about the quality of eggs you have to see what is inside the shell. Any decent butcher will not mind if you break one and the majority of not-so-decent butchers will forgive you if you drop one — a good high-mounded veiled dark yolk and a white gathered tightly round it are what you should be looking for on the floor. Even those Imperative cooks who did not sit the competition can join in with the survey: let's set a date for it. Wednesday next 9.00 a.m., everyone into his butcher's, flash your Spectator at him and, all together, smash an egg.