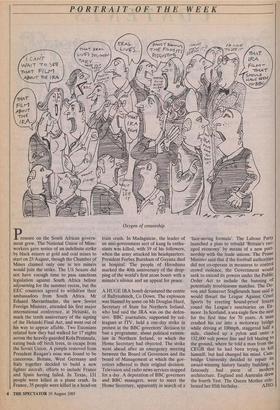 Oxygen of censorship Pressure on the South African govern- ment grew. The National Union of Mine- workers gave notice of an indefinite strike by black miners at gold and coal mines to start on 25 August, though the Chamber of Mines claimed only one in ten miners would join the strike. The US Senate did not have enough time to pass sanctions legislation against South Africa before adjourning for the summer recess, but the EEC countries agreed to withdraw their ambassadors from South Africa. Mr Eduard Shevardnadze, the new Soviet Foreign Minister, attended his first major international conference, at Helsinki, to mark the tenth anniversary of the signing of the Helsinki Final Act, and went out of his way to appear affable. Two Estonians related how they had walked for 17 nights across the heavily-guarded Kola Peninsula, eating buds off birch trees, to escape from the Soviet Union. A pimple removed from President Reagan's nose was found to be cancerous. Britain, West Germany and Italy together decided to build a new fighter aircraft, efforts to include France and Spain having failed. In Texas, 131 people were killed in a plane crash. In France, 35 people were killed in a head-on train crash. In Madagascar, the leader of an anti-government sect of kung fu enthu- siasts was killed, with 19 of his followers, when the army attacked his headquarters. President Forbes Burnham of Guyana died in hospital. The people of Hiroshima marked the 40th anniversary of the drop- ping of the world's first atom bomb with a minute's silence and an appeal for peace.

A HUGE IRA bomb devastated the centre of Ballynahinch, Co Down. The explosion was blamed by some on Mr Douglas Hurd, Secretary of State for Northern Ireland, who had said the IRA was on the defen- sive. BBC journalists, supported by col- leagues at ITV, held a one-day strike in protest at the BBC governors' decision to ban a programme, about political extrem- ism in Northern Ireland, to which the Home Secretary had objected. The strike went ahead after an emergency meeting between the Board of Governors and the board of Management at which the gov- ernors adhered to their original decision. Television and radio news services stopped for a day. A deputation of BBC governors and BBC managers, went to meet the Home Secretary, apparently in search of a lace-saving formula'. The Labour Party launched a plan to rebuild 'Britain's rav aged economy' by means of a new part- nership with the trade unions. The Prime Minister said that if the football authorities did not co-operate in measures to control crowd violence, the Government would seek to extend its powers under the Public Order Act to include the banning of potentially troublesome matches. The De- von and Somerset Staghounds hunt said it would thwart the League Against Cruet Sports by erecting hound-proof fences round the League's sanctuaries on Ex- moor. In Scotland, a sea eagle flew the nest for the first time for 70 years. A man crashed his car into a motorway bridge while driving at 100mph, staggered half a mile, climbed up a pylon and onto a 132,000 volt power line and fell blazing to the ground, where he told a man from the CEGB that he had been trying to kill himself, but had changed his mind. Cam- bridge University decided to repair its award-winning history faculty building, a fatuously bad piece of modern architecture. England and Australia drew the fourth Test. The Queen Mother cele- brated her 85th birthday. AJSG