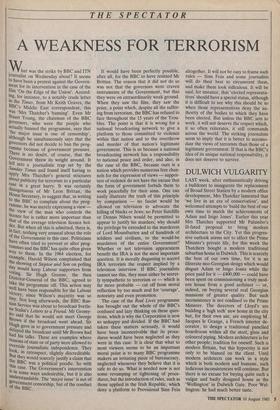 LAST week, after enthusiastically driving a bulldozer to inaugurate the replacement of Broad Street Station by a modern office development, Mrs Thatcher lamented that `we live in an era of conservation', and welcomed attempts to 'build the best of our own time to match the achievements of Adam and Inigo Jones'. Earlier this year Mrs Thatcher supported Mr Palumbo's ill-fated proposal to bring modern architecture to the City. Yet this progres- sive outlook seems not to affect the Prime Minister's private life, for this week the Thatchers bought a modern traditional suburban home in Dulwich. This is scarcely the best of our own time, for it is an illiterate neo-Georgian design which would disgust Adam or Inigo Jones while the price paid for it — £400,000 — could have been spent on commissioning a truly mod- ern house from a good architect — or, indeed, on buying several real Georgian mansions of greater quality. But such inconsistency is not confined to the Prime Minister. The directors of Lloyd's are building a 'high tech' new home in the city but, for their own use, are employing M. Jacques le Grange, a French interior de- corator, to design a traditional panelled boardroom within all the steel, glass and coloured piping. Modern architecture is for other people; tradition for oneself. Such is modern Britain, but this hypocrisy is not only to be blamed on the client. Until modern architects can work in a style which is both modern and humane, such ludicrous inconsistencies will continue. But there is no excuse for buying quite such a vulgar and badly designed house as the `Wellington' in Dulwich Gate. Poor Wel- lington: he had much better taste.