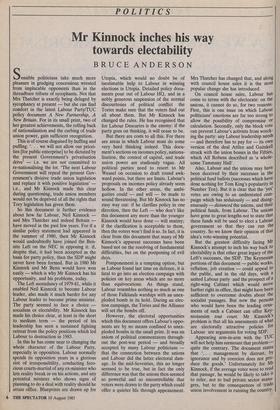 Sensible politicians take much more pleasure in grudging concessions wrested from implacable opponents than in the threadbare tribute of sycophants. Not that Mrs Thatcher is exactly being deluged by sycophancy at present — but she can find comfort in the latest Labour Party/TUC policy document A New Partnership, A New Britain. For in its small print, two of her greatest achievements, the rolling back of nationalisation and the curbing of trade union power, gain sufficient recognition.

This is of course disguised by huffing and puffing: `. . . we will not allow our priori- ties [for public enterprise] to be dictated by the present Government's privatisation drive' — i.e. we are not committed to re-nationalising the lot. 'The next Labour Government will repeal the present Gov- ernment's divisive trade union legislation and replace it with positive legislation' i.e., and Mr Kinnock made this clear during questioning, trade union members would not be deprived of all the rights that Tory legislation has given them.

So this document is further evidence about how far Labour, Neil Kinnock and Mrs Thatcher and indeed Britain have moved in the past few years. For if a similar policy statement had appeared in the summer of 1980, then Mr Kinnock would undoubtedly have joined the Ben- nite Left on the NEC in opposing it: if, despite that, it had been accepted as the basis for party policy, then the SDP might never have been formed. But in 1980 Mr Kinnock and Mr Benn would have won easily — which is why Mr Kinnock has his opportunity, and his problems, today.

The Left ascendancy of 1979-81, while it enabled Neil Kinnock to become Labour leader, also made it much harder for any Labour leader to become prime minister. The party seemed to face a choice socialism or electability. Mr Kinnock has made his choice clear, at least in the short to medium term — the period of his leadership has seen a sustained fighting retreat from the policy positions which led Labour to destruction in 1983.

In this he has come near to changing the whole character of the Labour Party, especially in opposition. Labour normally spends its opposition years in a glorious riot of irresponsibility, conducting fero- cious courts-martial of any ex-minister who lets reality break in on his actions, and any potential minister who shows signs of planning to do a deal with reality should he attain office. Blueprints are drawn up for Utopia, which would no doubt be of inestimable help to Labour in winning elections in Utopia. Detailed policy docu- ments pour out of Labour HQ, and in a nobly generous suspension of the normal discourtesies of political conflict the Tories make sure that the voters find out all about them. But Mr Kinnock has changed the rules. He has recognised that for Labour Descartes is the enemy: if the party goes on thinking, it will cease to be.

But there are costs to all this. For there are areas in which Labour must do some very hard thinking indeed. This docu- ment's sections on incomes policy, nationa- lisation, the control of capital, and trade union power are studiously vague. All political parties need to resort to Mr Weasel on occasion to draft round awk- ward points, but there are limits. Labour's proposals on incomes policy already seem hollow. In the other areas, the ambi- guities could — and will — be made to sound threatening. But Mr Kinnock has no easy way out: if he clarifies policy in one direction, then the Left — who don't like this document any more than the younger Kinnock would have done — will mutiny; if the clarification is acceptable to them, then the voters won't find it so. In fact, it is clear from this document that many of Mr Kinnock's apparent successes have been based not on the resolving of fundamental difficulties, but on the postponing of evil days.

Postponement is a tempting option, but as Labour found last time on defence, it is fatal to go into an election campaign with policies on key areas which are no more than equivocations. As things stand, Labour resembles nothing so much as one of those Falklands warships with an unex- ploded bomb in its hold. During an elec- tion campaign, the Tories and the Alliance will set the bombs off.

However, the electoral opportunities which this document offers Labour's oppo- nents are by no means confined to unex- ploded bombs in the small print. It was an axiom of political commentators through- out the post-war period — and broadly accepted by many Labour politicians that the connection between the unions and Labour did the latter electoral dam- age. In the mid-Seventies, this no longer seemed to be true, but in fact the only difference was that the unions then seemed so powerful and so uncontrollable that voters were drawn to the party which could offer a quieter life through appeasement. Mrs Thatcher has changed that, and along with council house sales it is the most popular change she has introduced.

On council house sales, Labour has come to terms with the electorate: on the unions, it cannot do so, for two reasons. First, this is one issue on which Labour politicians' emotions are far too strong to allow the possibility of compromise or calculation. Secondly, only the block vote can prevent Labour's activists from wreck- ing the party: any Labour leadership needs — and therefore has to pay for — its own version of the deal Attlee and Gaitskell struck with the union bosses in the Fifties, which Alf Robens described as 'a whole- some Tammany Hall'. Also, Labour and the unions may have been deceived by their successes in the political fund ballots (successes which have done nothing for Tom King's popularity in Number Ten). But it is clear that the 'yes' votes are owing to an understated cam- paign which has sedulously — and dising- enuously — distanced the unions, and their political funds, from Labour. The unions have gone to great lengths not to state that these funds will be used to elect a Labour government so that they can run the country. So we know their opinion of that idea's vote-winning potential. But the greatest difficulty facing Mr Kinnock's attempt to inch his way back to electability is that other great legacy of the Left's successes, the SDP. The Keynesian portions of this document — public works, reflation, job creation — could appeal to the public, and in the old days, with a united Labour party and the prospect of a right-wing Cabinet which would move further right in office, that might have been sufficient to overcome doubts about the socialist passages. But now the persons who would have been the leading orna- ments of such a Cabinet can offer Key- nesiansim tout court. Mr Kinnock's problem is that all his assessments of what are electorally attractive policies for Labour are arguments for voting SDP. Appearing arm-in-arm with the TUC will not help him surmount that problem quite the contrary. The document states that `. . management by distrust, by ignorance and by coercion does not pro- duce the goods.' Unfortunately for Mr Kinnock, if the average voter were to read that passage, he would be likely to take it to refer, not to bad private sector mana- gers, but to the consequences of trade union involvement in running the country•