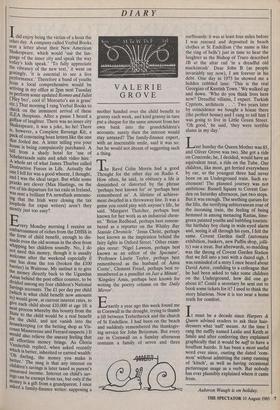 Idid enjoy being the victim of a hoax the other day. A company called Verbal Books sent a letter about their New American Shakespeare, which would 'use the lan- guage of the inner city and speak the way today's kids speak.' To fully appreciate the vibrancy of the new text,' it went on gratingly, 'it is essential to see a live performance.' Therefore a band of youths from a local comprehensive would be arriving in my office at 2pm next Tuesday to perform some updated Romeo and Juliet (Hey bro', cool it! Mercutio's ass is grass' etc.) That morning I rang Verbal Books to check on the imminent arrival of these ILEA thespians. After a pause I heard a guffaw of laughter. There was no inner city Shakespeare, it was a joke, ho ho! There is, however, a Complete Revenge Kit, a Pack of convincing hoax letters like the one that fooled me. A letter telling you your house is being compulsorily purchased. A bill from a shady hotel for 'use of Scheherazade suite and adult video hire.' A whole set of what James Thurber called Destructive Forces in Life. Actually the one I fell for was a good wheeze, I thought, and I was the ideal target. But while some pranks are clever (Max Hastings, on the eve of his departure for tax exile in Ireland, Was sent a brilliant PA newsflash announc- ing that the Irish were closing the tax loophole for expat writers) aren't they mostly just too easy?

Every Monday morning I receive an embarrassment of riches from the DHSS in the form of child benefit, enough to dis- suade even the old woman in the shoe from Whipping her children soundly. No, I do not need this money, though it is usually Welcome after the weekend especially if one has done the ton (broken the £100 barrier) in Waitrose. My instinct is to give the money directly back to the Ugandan Asian behind the post office counter, to be divided among my four children's National Savings accounts. The £1 per day per child (Which is what child benefit now amounts to) would grow, at current interest rates, to give each child about £10,000 at age 18: a neat process whereby this bounty from the State to the child would be a real benefit for the child, and not vanish into the housekeeping (or the betting shop as Vis- count Massereene and Ferrard suspects.) It Would also relieve the uneasy feeling that all effortless money brings. As Gloria Vanderbilt replied, when asked recently Which is better, inherited or earned wealth: .0h darling, the money you make is better.' The snag is that any interest on children's savings is later taxed as parent's unearned income. Interest on child's sav- ings can be exempt from tax, but only if the money is a gift from a grandparent. I once asked a family-finance writer: supposing a VALERIE GROVE mother handed over the child benefit to granny each week, and kind granny in turn put a cheque for the same amount from her own bank into the grandchildren's accounts: surely then the interest would stay untaxed? The family-finance expert, with an inscrutable smile, said it was so: but he would not dream of suggesting such a thing.

Exactly a year ago this week found me in Cornwall in the drought, trying to thumb a lift between Trebetherick and the church of St Endellion. I had been on the beach and suddenly remembered the thanksgiv- ing service for John Betjeman. But every car in Cornwall on a Sunday afternoon contains a family of seven and three surfboards: it was at least four miles before I was rescued and deposited in beach clothes at St Endellion (`the name is like the ring of bells') just in time to hear the laughter as the Bishop of Truro described JB at the altar rail 'in a dreadful old mackintosh'. Dear John B (as people invariably say now), I am forever in his debt. One day in 1973 he showed me a hidden cobbled lane: 'This is the real Georgian of Kentish Town.' We walked up and down. 'Who do you think lives here now? Dreadful villains, I expect. Turkish Cypriots, architects . . .'. Two years later by coincidence we bought a house there (the perfect house) and I rang to tell him I was going to live in Little Green Street. `Oh good,' he said, 'they were terrible slums in my day.'

Last Sunday the Queen Mother was 85, and Oliver Grove was two. She got a ride on Concorde; he, I decided, would have an equivalent treat, a ride on the Tube. Our children, like most, get ferried everywhere by car, so the youngest three had never been on an Underground train. Such ex- citement! The planned journey was not ambitious: Russell Square to Covent Gar- den on Saturday afternoon, just two stops. But it was enough. The seething queues for the lifts, the terrifying subterranean roar of the incoming train, the feeling of being hemmed in among menacing Rastas, lime- green painted youths and babbling tourists: the birthday boy clung in wide-eyed alarm and, seeing it all through his eyes, I felt the same. Covent Garden itself (automata exhibition, buskers, new Puffin shop, jolli- ty) was a treat. But afterwards, so madding was the throng of Covent Garden Station that we fell into a taxi with a dazed sigh. I was reminded of a story I once heard about David Astor, confiding to a colleague that he had been asked to take some children on the Underground, how did one go about it? Could a secretary be sent out to book some tickets for it? I used to think the story hilarious. Now it is too near a home truth for comfort.

I t must be a decade since Harpers & Queen advised readers to ask their hair- dressers what `naff meant. At the time I rang the naffly named Leslie and Keith at Smile and after conferring they explained graphically that it would be naff to have a bouffant hairdo. It has been a most useful word ever since, ousting the dated 'com- mon' without admitting the camp cunning of 'kitsch', as well as having occasional picturesque usage as a verb. But nobody has ever plausibly explained where it came from.