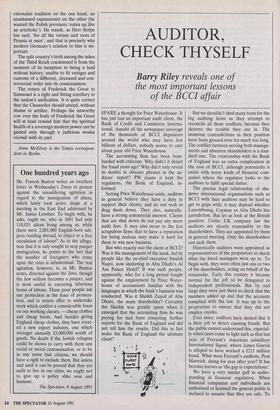 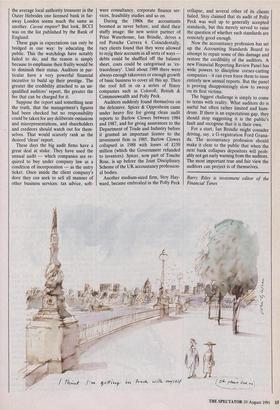 Barry Riley reveals one of

the most important lessons of the BCCI affair

SPARE a thought for Price Waterhouse. It has just lost an important audit client, the Bank of Credit and Commerce Interna- tional. Amidst all the newspaper coverage of the thousands of BCCI depositors around the world who may have lost billions of dollars, nobody seems to care about poor old Price Waterhouse.

The accounting firm has been bom- barded with criticism. Why didn't it detect the fraud years ago? Why did it only reveal its doubts in obscure phrases in the au- ditors' report? PW claims it kept the regulators, the Bank of England, in- formed.

Setting Price Waterhouse aside, auditors in general believe they have a duty to support their clients, and do not wish to drag them down. They also, naturally, have a strong commercial interest. Clients that are shut down do not pay any more audit fees. It may also occur to the less scrupulous firms that to have a reputation for being zealous may make it hard for them to win new business.

But who exactly was the client at BCCI? Was it the management of the bank, led by people like the ex-chief executive Swaleh Naqvi, now sheltering in Abu Dhabi's Al AM Palace Hotel? It was such people, apparently, who for a long period fought against the employment by Price Water- house of accountants familiar with the languages in which the bank's business was conducted. Was it Sheikh Zayed of Abu Dhabi, the main shareholder? Certainly the Sheikh was greatly upset when it emerged that the accounting firm he was paying for had been compiling further reports for the Bank of England and did not tell him the results. Did this in fact make the Bank of England the ultimate client? But we shouldn't shed many tears for the big auditing firms as they attempt to reconcile all these conflicts, because they deserve the trouble they are in. The immense contradictions in their position have been glossed over for much too long. The conflict between serving both manage- ments and absentee shareholders is a stan- dard one. The relationship with the Bank of England was an extra complication in the case of BCCI, although potentially it exists with many kinds of financial com- panies where the regulator looks to the auditors to fulfil special duties.

The precise legal relationship of sha- dowy international organisations such as BCCI with their auditors may be hard to get to grips with; it may depend whether Luxembourg, Cayman or Abu Dhabi has jurisdiction. But let us look at the British position. Under UK company law the auditors are clearly responsible to the shareholders. They are appointed by them in general meeting. Only the shareholders can sack them.

Historically auditors were appointed as representatives of the proprietors to check what the hired managers were up to. To begin with, they were often just one or two of the shareholders, acting on behalf of the remainder. Early this century it became normal for the job to be delegated to independent professionals. But by and large they were just there to check that the numbers added up and that the accounts complied with the law. It was up to the proprietors to ensure that they did not employ crooks.

Ever since, auditors have denied that it is their job to detect cunning frauds. But the public cannot understand this, especial- ly when cases come to light such as that last year of Ferranti's American subsidiary International Signal, where James Guerin is alleged to have worked a £215 million fraud. What were Ferranti's auditors, Peat Marwick, doing for year after year? It has become known as 'the gap in expectations', We have a very similar gulf in under- standing in financial regulation. When financial companies and individuals are authorised or licensed the general public is inclined to assume that they are safe. To the average local authority treasurer in the Outer Hebrides one licensed bank in far- away London seems much the same as another. Caveat emptor? But look, BCCI was on the list published by the Bank of England.

These gaps in expectations can only be bridged in one way: by educating the public. This the watchdogs have notably failed to do, and the reason is simply because to emphasise their frailty would be to diminish their status. Auditors in par- ticular have a very powerful financial incentive to build up their prestige. The greater the credibility attached to an un- qualified auditors' report, the greater the fee that can be charged for it.

Suppose the report said something near the truth, that the management's figures had been checked but no responsibility could be taken for any deliberate omissions and misrepresentations, and shareholders and creditors should watch out for them- selves. That would scarcely rank as the desired 'clean' report.

These days the big audit firms have a great deal at stake. They have used the annual audit — which companies are re- quired to buy under company law as a condition of incorporation — as the entry ticket. Once inside the client company's door they can seek to sell all manner of other business services: tax advice, soft- ware consultancy, corporate finance ser- vices, feasibility studies and so on.

During the 1980s the accountants boomed as never before, and shed their stuffy image: the new senior partner of Price Waterhouse, Ian Brindle, drives a red Porsche Carrera 4. Coincidentally, racy clients found that they were allowed to rejig their accounts in all sorts of ways debts could be shuffled off the balance sheet, costs could be categorised as 'ex- traordinary'. Until about 1989 there were always enough takeovers or enough growth of basic business to cover all this up. Then the roof fell in on a series of flimsy companies such as Coloroll, British & Commonwealth and Polly Peck.

Auditors suddenly found themselves on the defensive. Spicer & Oppenheim came under heavy fire for giving clean audit reports to Barlow Clowes between 1984 and 1987, and for giving assurances to the Department of Trade and Industry before it granted an important licence to the investment firm in 1985. Barlow Clowes collapsed in 1988 with losses of £150 million (which the Government refunded to investors). Spicer, now part of Touche Ross, is up before the Joint Disciplinary Scheme of the UK accountancy profession- al bodies.

Another medium-sized firm, Stoy Hay- ward, became embroiled in the Polly Peck collapse, and several other of its clients failed. Stoy claimed that its audit of Polly Peck was well up to generally accepted standards, but this merely served to raise the question of whether such standards are remotely good enough.

Now the accountancy profession has set up the Accounting Standards Board to attempt to repair some of this damage and restore the credibility of the auditors. A new Financial Reporting Review Panel has wide powers to discipline corner-cutting companies – it can even force them to issue entirely new annual reports. But the panel is proving disappointingly slow to swoop on its first victims.

The biggest challenge is simply to come to terms with reality. What auditors do is useful but often rather limited and hum- drum. If there is an expectations gap, they should stop suggesting it is the public's fault and recognise that it is their own.

For a start, Ian Brindle might consider driving, say, a G-registration Ford Grana- da. The accountancy profession should make it clear to the public that when the next bank collapses depositors will prob- ably not get early warning from the auditors. The most important true and fair view the auditors can project is of themselves.

Barry Riley is investment editor of the Financial Times