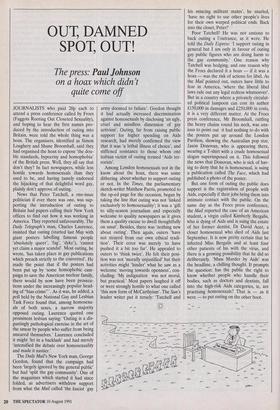 OUT, DAMNED SPOT, OUT!

The press: Paul Johnson on a hoax which didn't quite come off

JOURNALISTS who paid 20p each to attend a press conference called by Frocs (Faggots Rooting Out Closeted Sexuality), and hoping to hear the first names pro- duced by the introduction of outing into Britain, were told the whole thing was a hoax. The organisers, identified as Simon Loughery and Shane Broomhall, said they had organised the hoax to expose 'the dou- ble standards, hypocrisy and homophobia' of the British press. Well, they all say that don't they? In fact newspapers, while less hostile towards homosexuals than they used to be, and having tamely endorsed the hijacking of that delightful word gay, plainly don't approve of outing.

News that Peter Tatchell, a one-issue politician if ever there was one, was sup- porting the introduction of outing to Britain had papers calling their New York offices to find out how it was working in America. They reported unfavourably. The Daily Telegraph's man, Charles Laurence, insisted that outing (started last May with giant posters labelling famous people `absolutely queer', 'fag', 'dyke), 'cannot yet claim a major scandal'. Most outing, he wrote, 'has taken place in gay publications which preach strictly to the converted'. He made the point that if the posters had been put up by 'some homophobic cam- paign to save the American nuclear family, there would by now have been prosecu- tions under the increasingly popular head- ing of "bias crime" '. As it was, he added, a poll held by the National Gay and Lesbian Task Force found that, among homosexu- als of both sexes, a narrow majority opposed outing. Laurence quoted one prominent lesbian saying: 'Outing is a dis- gustingly pathological exercise in the art of the smear by people who suffer from being smeared themselves.' Laurence concluded it might let in a backlash' and had merely `intensified the debate over homosexuality and made it nastier.'

The Daily Mail's New York man, George Gordon, found that the campaign had been 'largely ignored by the general public' but had 'split the gay community'. One of the magazines which started it had since folded, as advertisers withdrew support from what the Mail called 'the fascist gay army doomed to failure'. Gordon thought it had actually increased discrimination against homosexuals by disclosing 'an ugly, cruel and mindless dimension of gay activism'. Outing, far from raising public support for higher spending on Aids research, had merely confirmed the view that it was 'a lethal illness of choice', and stiffened resistance to those whom one lesbian victim of outing termed 'Aids ter- rorists'.

Among London homosexuals not in the know about the hoax, there was some dithering about whether to support outing or not. In the Times, the parliamentary sketch-writer Matthew Parris, promoted to the op-ed page for the occasion, began by taking the line that outing was not 'linked exclusively to homosexuality'; it was a 'gift to silly-season journalism and especially welcome to quality newspapers as it gives them a quality excuse to dwell thoughtfully on smut'. Besides, there was 'nothing new about outing'. Then again, outers 'have not strayed from our own ethical tradi- tion'. Their error was merely `to have pushed it a bit too far'. He appealed to outers to 'think twice'. He felt their posi- tion was not 'morally unjustified' but their activities might 'hinder' what he saw as a welcome 'moving towards openness', con- cluding: 'My indignation was not moral, but practical.' Most papers laughed it off or were strongly hostile to what one called `this new form of McCarthyism'. The Sun's leader writer put it tersely: `Tatchell and his mincing militant mates', he snarled, `have no right to use other people's lives for their own warped political ends. Back into the closet, Peter!'

Poor Tatchell! He was not anxious to back outing a l'outrance, as it were. He told the Daily Express: 'I support outing in general but I am only in favour of outing gay public figures who are doing harm to the gay community.' One reason why Tatchell was hedging, and one reason why the Frocs declared it a hoax — if it was a hoax — was the risk of actions for libel. As the Mail pointed out, outers have little to fear in America, 'where the liberal libel laws rule out any legal redress whatsoever'. But in a country where a privately circulat- ed political lampoon can cost its author £150,000 in damages and £250,000 in costs, it is a very different matter. At the Frocs press conference, Mr Broomhall, rattling the heavy chains round his neck, was anx- ious to point out it had nothing to do with the posters put up around the London Pavilion, showing the Australian pop star, Jason Donovan, who is appearing there, wearing a T-shirt with a crude homosexual slogan superimposed on it. This followed the news that Donovan, who is sick of hav- ing to deny that he is homosexual, is suing a publication called The Face, which had published a photo of the poster.

But one form of outing the public does support is the registration of people with Aids, especially if their jobs bring them into intimate contact with the public. On the same day as the Frocs press conference, the Mail reported the case of an American student, a virgin called Kimberly Bergalis, who is dying of Aids and is suing the estate of her former dentist, Dr David Acer, a closet homosexual who died of Aids last September. It is now pretty certain that he infected Miss Bergalis and at least four other patients of his with the virus, and there is a growing possibility that he did so deliberately. 'Mass Murder by Aids' was the headline, a chilling thought. It prompts the question: has the public the right to know whether people who handle their bodies, such as doctors and dentists, fall into the high-risk Aids categories, ie, are practising homosexuals? That is — as it were — to put outing on the other boot.