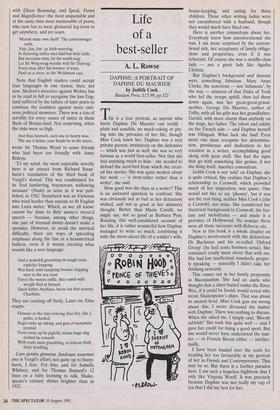 Life of a best-seller

DAPHNE: A PORTRAIT OF DAPHNE DU MAURIER by Judith Cook Bantam Press, £15.99, pp.321 This is a true portrait, as anyone who knew Daphne Du Maurier can testify : plain and sensible, no muck-raking or pry- ing into the privacies of her life, though Miss Cook knew her. Daphne was a very private person, instictively on the defensive — which was just as well; she was so very famous as a world best-seller. Not that she had anything much to hide : she needed to defend the seed-bed from which she creat- ed her stories. She was quite modest about her work — 'a story-teller rather than a writer', she said.

How good was she then as a writer? This is an awkward question to confront. She was obviously not as bad as her detractors wished, and not as good as her admirers thought. Better than Marie Corelli, we might say, not so good as Barbara Pym. Reading this well-considered account of her life, it is rather wonderful how Daphne managed to write so much, combining it with the move-about life of a soldier's wife, house-keeping, and caring for three children. Those other writing ladies were not encumbered with a husband, though they would much have liked one.

Here is another conundrum about her. Everybody knew how unconventional she was. I am more surprised by the conven- tional side, her acceptance of family obliga- tions and proprieties, even if it was reluctant. Of course she was a middle-class lady — not a great lady like Agatha Christie.

But Daphne's background and descent were something fabulous. Mary Anne Clarke, the notorious — not 'infamous', by the way — mistress of that Duke of York who led the troops uphill, then led them down again, was her great-great-grand- mother. George Du Maurier, author of Trilby, with all his gifts was her grandfather; Gerald, with more charm than anybody on the stage, her father. The talent and oddity on the French side — and Daphne herself was bilingual. What luck she had! Even more one must recognise her determina- tion, persistence and dedication to her vocation as a writer, accomplishing good along with poor stuff. She had the signs that go with something like genius, if not the thing itself. Another conundrum.

Judith Cook is not 'sold' on Daphne; she is quite critical. She realises that Daphne's relationship to Cornwall, which provided much of her inspiration, was queer. One would not like to say 'phoney', but it was not the real thing, neither Miss Cook's (she is Cornish), nor mine. She transferred her theatrical background to Cornwall, the fan- tasy and melodrama — and made it a province of Hollywood. No wonder there were all those successes with Rebecca, etc.

New in this book is a whole chapter on Daphne's involvement with the deleterious Dr Buchman and his so-called 'Oxford Group' (he had acute business sense). She remained totally mum about that with me. She had low intellectual standards, proper- ly speaking — naturally I didn't take her thinking seriously.

This comes out in her family propensity to Baconianism. She had an uncle who thought that a chest buried under the River Wye, if it could be found, would reveal who wrote Shakespeare's plays. That was about its mental level. Miss Cook gets me wrong about this. I never discussed the matter with Daphne .There was nothing to discuss. When she asked me, I simply said, 'Bloody rubbish!' She took this quite well — and I gave her credit for being a good sport. But she would never have understood the mat- ter — or Francis Bacon either — intellec- tually.

I have been hauled over the coals for treating her too favourably in my portrait of her in Friends and Contemporaries. That may be so. But there is a further paradox here. 1 am such a hopeless highbrow that I only like Virginia Woolf. It was precisely because Daphne was not really my cup of tea that I did my best for her.