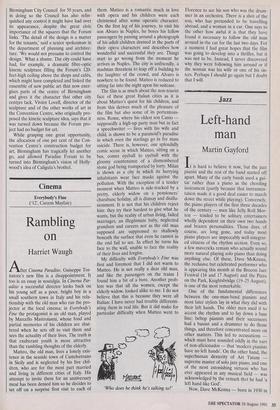 After Cinema Paradiso, Guiseppe Tor- natore's new film is a disappointment. It too is an essay in nostalgia. In Cinema Par- adiso a successful director looks back on his young self as a poor, bright boy in a small southern town in Italy and his rela- tionship with the old man who ran the pro- jector at the local cinema; in Everybody's Fine the protagonist is an old man, played by Marcello Mastroianni, whose fond and partial memories of his children are shat- tered when he sets off to visit them and sees the actuality of their lives. The truth is that exuberant youth is more attractive than the rambling thoughts of the elderly.

Matteo, the old man, lives a lonely exis- tence in the seaside town of Castelvetrano in Sicily and is neglected by his five chil- dren, who are for the most part married and living in different cities of Italy. His attempt to invite them for an anniversary meal has been denied him so he decides to set off on a surprise first visit to each of them. Matteo is a romantic much in love with opera and his children were each christened after some operatic character. On the first leg of his journey, to visit his son Alvaro in Naples, he bores his fellow passengers by passing around a photograph of his adult children dressed in the parts of their opera characters and describes how wonderful and successful they are, Things start to go wrong from the moment he arrives in Naples. The city is unfriendly, a madman threatens to leap off a building to the laughter of the crowd, and Alvaro is nowhere to be found. Matteo is reduced to sitting far into the night upon his suitcase.

The film is as much about the non-tourist face of these great Italian cities as it is about Matteo's quest for his children, and from this derives much of the pleasure of the film but also some of its portentous- ness. Rome, where his oldest son Canio supposedly a high-up party man but in fact a speechwriter — lives with his wife and child, is shown to be a paranoid's paradise in which even the starlings go in for mass suicide. There is, however, one splendidly comic scene in which Matteo, sitting on a bus, comes eyeball to eyeball with the gloomy countenance of a dismembered stone god being transported by lorry. Milan is shown as a city in which its hurrying inhabitants wear face masks against the pollution. With the exception of a tender moment when Matteo is side-tracked by a pretty, elderly widow on a pensioners' charabanc holiday, all is dismay and disillu- sionment. It is not that his children reject him: they try their hardest to give what he wants, but the reality of urban living, failed marriages, an illegitimate baby, neglected grandson and careers not as the old man supposed are suppressed so shallowly beneath the surface that even he cannot in the end fail to see. In effect he turns his face to the wall, unable to face the reality of their lives and forgive.

My difficulty with Everybody's Fine was first and foremost that I did not warm to Matteo. He is not really a dear old man, and like the passengers on the trains I found him a bit of a bore. Another prob- lem was that all the women, except the elderly widow, looked alike to me. I do not believe that this is because they were all Italian: I have never had trouble differenti- ating them in real life. But it did make for particular difficulty when Matteo went to 'Who does he think he's talking to?' Florence to see his son who was the drum- mer in an orchestra. There is a shot of the son, who has pretended to be travelling abroad, and a woman in a car. One says to the other how awful it is that they have found it necessary to follow the old man around in the car for the last two days. For a moment I had great hopes that the film was going to develop into a thriller, but it was not to be. Instead, I never discovered why they were following him around or if the woman was his wife or one of his sis- ters. Perhaps I should go again but I doubt that I will.