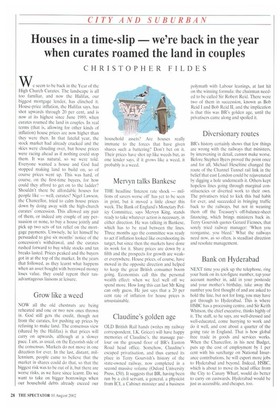 Page 28, 10 August 2002 — Houses in a time-slip we're back in the year when curates roamed the land in couples
Close

Wc seem to be back in the Year of the High Church Curates. The landscape is all too familiar, and now the Halifax, our biggest mortgage lender, has clinched it. House-price inflation, the Halifax says, has shot upwards through 20 per cent, and is now at its highest since June 1989, when curates roamed the land in couples. In real terms (that is, allowing for other kinds of inflation) house prices are now higher than they were then. In that fateful year, the stock market had already cracked and the skies were clouding over, but house prices were racing ahead as if nothing could stop them. It was natural, so we were told. Everyone wanted a house and God had stopped making land to build on, so of course prices went up. This was hard, of course, on the first-time buyers, for how could they afford to get on to the ladder? Shouldn't there be affordable houses for people like — well, curates? Nigel Lawson, the Chancellor, tried to calm house prices down by doing away with the high-church curates' concession. This allowed any pair of them, or indeed any couple of any persuasion or none, to buy a house jointly and pick up two sets of tax relief on the mortgage payments. Unwisely, he let himself be persuaded to give six months' notice of the concession's withdrawal, and the curates rushed forward to buy while stocks and tax breaks lasted. Prices peaked and the buyers got in at the top of the market. In the years that followed, as they learnt what happens when an asset bought with borrowed money loses value, they could repent their taxadvantageous liaisons at leisure.

NOW all the old chestnuts are being reheated and one or two new ones thrown in. God still gets the credit, though not from the curates, for pushing up prices by refusing to make land. The consensus view (shared by the Halifax) is that prices will carry on upwards, although at a slower pace. I am, as usual, on the Eeyorish side of the consensus. Markets do not move in one direction for ever. In the last, distant, millennium, people came to believe that the market in shares could do that, so that the biggest risk was to be out of it, but there are worse risks, as we have since learnt. Do we want to take on bigger borrowings when our household debts already exceed our

household assets? Are houses really immune to the forces that have given shares such a battering? Don't bet on it, Their prices have shot up like weeds but, as one lender says, if it grows like a weed, it probably is a weed.

THE headline 'Interest rate shock — millions of savers worse off' has yet to be seen in print, but it moved a little closer this week. The Bank of England's Monetary Policy Committee, says Mervyn King, stands ready to take whatever action is necessary, in either direction. He was talking in Bankese, which has to be read between the lines. Three months ago the committee was ready to act if inflation looked like overshooting its target, but since then the markets have done its work for it. Share prices are down by a fifth and the prospects for growth are weaker everywhere. House prices, of course, have moved in the opposite direction and helped to keep the great British consumer boom going. Economists call this the personal wealth effect: when we feel well off we spend more. How long this can last Mr King can only guess. He just says that a 20 per cent rate of inflation for house prices is unsustainable.

OLD British Rail hands (writes my railway correspondent, I.K. Gricer) will have happy memories of Claudine's, the massage parlour on the ground floor of BR's Euston Road head office. Somehow, Claudine's escaped privatisation, and thus earned its place in Terry Gourvish's history of the state-owned railway, now completed in a second massive volume (Oxford University Press, £50). It suggests that BR, having been run by a civil servant, a general, a physicist from ICI, a Cabinet minister and a business polymath with Labour leanings, at last hit on the winning formula: the chairman needed to be called Sir Robert Reid. There were two of them in succession, known as Bob Reid I and Bob Reid II, and the implication is that this was BR's golden age, until the privatisers came along and spoiled it.

BR's history certainly shows that few things are wrong with the railways that ministers, by intervening in detail, cannot make worse. Before Stephen Byers proved the point once and for all, Michael Heseltine changed the route of the Channel Tunnel rail link in the belief that east London could be rejuvenated by digging a hole underneath it. Others kept hopeless lines going through marginal constituencies or diverted work to their own. The privatisers tried to kick this bad habit for ever, and succeeded in bringing traffic back to the railways, but not in weaning them off the Treasury's off-balance-sheet financing, which brings ministers back in. Terry Gourvish quotes Gerard Fiennes, that sorely tried railway manager: 'When you reorganise, you bleed.' What the railways need now, as so often, is steadfast direction and resolute management.

NEXT time you pick up the telephone, ring your bank on its ten-figure number, tap your account number in, add in your postcode and your mother's birthday, take away the number you first thought of and are asked to hold the line, but not for long, you may have got through to Hyderabad. This is where HSBC has a processing centre, and Sir Keith Whitson, the chief executive, thinks highly of it. The staff, so he says, are well-dressed and well-educated, come hurrying to work and do it well, and cost about a quarter of the going rate in England. That is how global free trade in goods and services works. When the Chancellor, in his next Budget, puts up the cost of employment by 1 per cent with his surcharge on National Insurance contributions, he will export more jobs to Hyderabad and beyond. Indeed, HSBC, which is about to move its head office from the City to Canary Wharf, would do better to carry on eastwards. Hyderabad would be just as accessible, and cheaper, too.