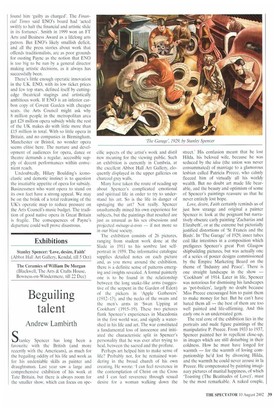 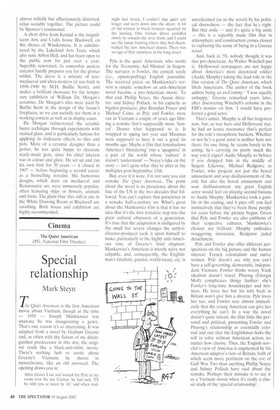 Stanley Spencer has long been a favourite with the British (and more recently with the Americans), as much for the beguiling oddity of his life and work as for his undeniable skills as painter and draughtsman. Last year saw a large and comprehensive exhibition of his work at Tate Britain, but there is always room for the smaller show, which can focus on spe

cific aspects of the artist's work and distil new meaning for the viewing public. Such an exhibition is currently in Cumbria, at the excellent Abbot Hall Art Gallery, eloquently displayed in the upper galleries on charcoal grey walls.

Many have taken the route of reading up about Spencer's complicated emotional and spiritual life in order to try to understand his art. So is the life in danger of upstaging the art? Not really. Spencer unashamedly mined his own experience for subjects, but the paintings that resulted are just as unusual as his sex obsessions and projected menage-d-trois — if not more so in our blasé society.

The exhibition consists of 26 pictures, ranging from student work done at the Slade in 1911 to his sombre last selfportrait in 1959. The informative catalogue supplies detailed notes on each picture and, as you move around the exhibition, there is a definite sense of patterns emerging and insights revealed. A formal painterly one is to be found in the relationship between the long snake-like arms (suggestive of the serpent in the Garden of Eden) of the pickers in 'Apple Gatherers' (1912-13), and the necks of the swans and the men's arms in 'Swan Upping at Cookham' (1915-19). These two pictures flank Spencer's experiences in Macedonia in the first world war, and signify a watershed in his life and art. The war constituted a fundamental loss of innocence and initiated the characteristic split in Spencer's personality that he was ever after trying to heal, between the sacred and the profane.

Perhaps art helped him to make sense of life? Probably not, for he remained wandering in the broad church of his own creating. He wrote: .1 can feel reverence in the contemplation of Christ on the Cross and I can feel reverence through sexual desire for a woman walking down the

street.' His confusion meant that he lost Hilda, his beloved wife, because he was seduced by the idea (the union was never consummated) of marriage to a glamorous lesbian called Patricia Preece, who calmly fleeced him of virtually all his worldy wealth. But no doubt art made life bearable, and the beauty and optimism of some of Spencer's paintings reassure us that he never entirely lost hope.

Love, desire, Faith certainly reminds us of just how strange and original a painter Spencer is: look at the poignant but narratively obscure early painting 'Zacharias and Elizabeth', or at the extreme but pictorially justified distortions of 'St Francis and the Birds'. In 'The Garage' of 1929, inner tubes coil like intestines in a composition which prefigures Spencer's great Port Glasgow shipbuilding pictures, but was actually one of a series of poster designs commissioned by the Empire Marketing Board on the theme of 'Industry and Peace'. There is one straight landscape in the show — 'Cookbam' of 1914. Later in life, Spencer was notorious for dismissing his landscapes as 'pot-boilers', largely no doubt because Miss Preece encouraged him to paint them to make money for her. But he can't have hated them all — the best of them are too well painted and life-affirming. And this early one is an understated gem.

The real core of the exhibition lies in the portraits and nude figure paintings of the manipulative P. Preece. From 1933 to 1937, Spencer painted her in repellent close-up, in images which are still disturbing in their coldness. How he must have longed for warmth — for the warmth of loving companionship he'd lost by divorcing Hilda, and the warmth he could never arouse in la Preece. He compensated by painting imaginary pictures of marital happiness, of which 'Toasting (The Beatitudes of Love)', must be the most remarkable. A naked couple, almost wilfully but affectionately distorted, relax sociably together. The picture could be Spencer's testimonial.

A short drive from Kendal is the magnificent Arts and Crafts house Blackwell. on the shores of Windermere. It is administered by the Lakeland Arts Trust, which also runs Abbot Hall, and has been open to the public now for just over a year. Superbly renovated, its somewhat austere exterior hardly prepares you for the glories within. The decor is a mixture of neomediaeval and ultra-modern (it was built in 1898-1900 by M.H. Baillie Scott), and makes a brilliant showcase for the temporary exhibition of William De Morgan's ceramics. De Morgan's tiles were used by Baillie Scott in the design of the house's fireplaces, so we can usefully see them in a working context as well as in display cases.

De Morgan rediscovered the ceramic lustre technique through experiments with stained glass, and is particularly famous for applying its iridescent effects to tiles and pots. More of a ceramic designer than a potter, he was quite happy to decorate ready-made pots, since his chief interest was in colour and glaze. He set up and ran his own firm for 30 years — it closed in 1907 — before beginning a second career as a bestselling novelist. His humorous designs, which drew on mediaeval and Renaissance art, were immensely popular, often featuring ships or flowers, animals and birds. The plain blue tiles still in situ in the White Drawing Room at Blackwell are ravishing. Both house and exhibition are highly recommended.