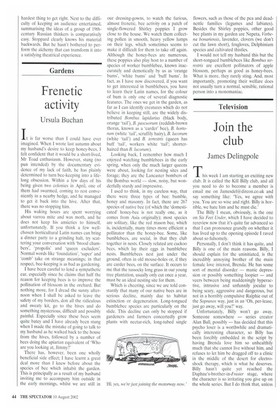 It is far worse than I could have ever imagined. When I wrote last autumn about my husband's desire to keep honey-bees, I felt confident that it would be a short-lived, Mr Toad enthusiasm. However, stung (no pun intended) by the documentary evidence of my lack of faith, he has plainly determined to turn bee-keeping into a lifelong obsession. Within a few days of his being given two colonies in April, one of them had swarmed, coming to rest conveniently in a nearby hedge, and he managed to get it back into the hive. After that, there was no stopping him.

His waking hours are spent worrying about varroa mite and wax moth, and he does not keep his anxieties to himself, unfortunately. If you think a few wellchosen horticultural Latin names can bring a dinner party to a grinding halt, try scattering your conversation with 'brood chambers', 'propolis' and 'queen excluders'. Normal words like 'foundation', 'super' and 'comb' take on strange meanings; in that respect, bee-keeping is as bad as gardening.

I have been careful to lend a sympathetic ear, especially since he claims that half the reason for keeping bees is to improve the pollination of blossom in the orchard. But nothing more, for I dread the sunny afternoon when I shall be asked to leave the safety of my borders, don all the ridiculous and sweaty kit, go to the hives and do something mysterious, difficult and possibly painful. Especially since these bees seem quite batey and I have already been stung when I made the mistake of going to talk to my husband as he walked back to the house from the hives, followed by a number of bees doing the apiarian equivalent of 'Who are you looking at, Jimmy?'

There has, however, been one wholly beneficial side effect; I have learnt a great deal more than I knew before about the species of bee which inhabit the garden. This is principally as a result of my husband inviting me to accompany him outside in the early mornings, whilst we are still in

our dressing-gowns, to watch the furious, almost frenetic, bee activity on a patch of single-flowered Shirley poppies I grow close to the house. We watch them collecting pollen in smooth, heavy yellow lumps on their legs, which sometimes seems to make it difficult for them to take off again. Although the honey-bees are numerous, these poppies also play host to a number of species of worker bumblebee, known inaccurately and demotically by us as 'orange bums', 'white bums' and 'buff bums'. In fact, as I have now discovered, if you want to get interested in bumblebees, you have to learn their Latin names, for the colour of bum is only one of several diagnostic features. The ones we get in the garden, as far as I can identify creatures which do not believe in keeping still, are the widely distributed Bombus lapidarius (black body, orange `tail'), B. pascuorum (reddish-brown thorax, known as a 'carder' bee), B. hortorum (white 'tail', scruffily hairy), B. lucorum (white 'tail') and B. terrestris (queen has buff 'tail', workers white 'tail'; shorterhaired than B. lucorum).

Looking back, I remember how much I enjoyed watching bumblebees in the early spring, when only the much larger queens were about, looking for nesting sites and forage; they are the Lancaster bombers of the Bombus world — slow, noisy, but wonderfully sturdy and impressive.

I used to think, in my careless way, that there were three types of bee: bumble, honey and masonry. In fact, there are 267 species of native bee (of which the `domesticated' honey-bee is not really one, as it comes from Asia originally); most species are solitary, like the red mason bee, which is, incidentally, many times more efficient a pollinator than the honey-bee. Some, like bumblebees, are social, in that they club together in nests, Closely related are cuckoo bees, which lay their eggs in bumblebee nests. Bumblebees nest just under the ground, often in old mouse-holes or, if they are carder bees, on the surface. It occurs to me that the tussocky long grass in our young tree plantation, usually only cut once a year, must be an ideal nesting site for them.

Which is cheering, since we are told constantly that many of our native bees are in serious decline, mainly due to habitat extinction or degeneration. Long-tongued bumblebee species are particularly on the slide. This decline can only be stopped if gardeners and farmers concertedly grow plants with nectar-rich, long-tubed single

flowers, such as those of the pea and deadnettle families (legumes and labiates). Besides the Shirley poppies, other good bee plants in my garden are Nepeta, Verbena bonariensis, lavender, clovers (we don't cut the lawn short), foxgloves, Delphinium species and cultivated thistles.

I would not tell my husband this but the short-tongued bumblebees like Bombus terrestris are excellent pollinators of apple blossom, perhaps as good as honey-bees. What is more, they rarely sting. And, most importantly, promoting their welfare does not usually turn a normal, sensible, rational person into a monomaniac.